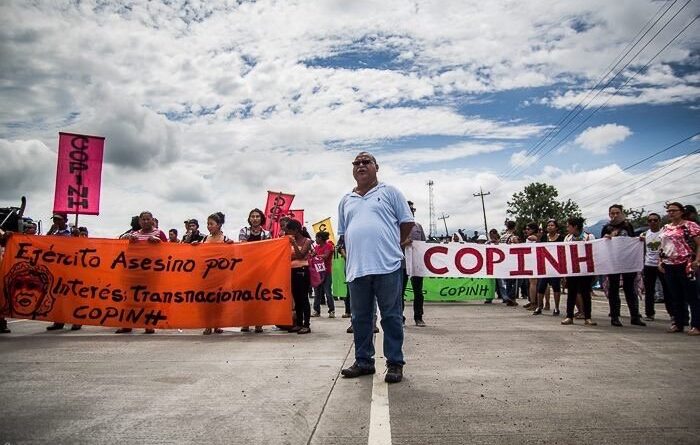 “Honduras ended the year under strong threats against its citizens, expressed in the COVID-19 pandemic, hurricanes, unemployment, hunger, violence, drug trafficking, corruption and impunity, but also expressed in the political electoral environment, model cities and the creation of anti-popular laws and decrees,” said Jesuit priest Ismael Moreno, affectionately known as Father Melo, director of the ERIC-SJ Reflection, Research and Communication Team, in an interview with Radio Progreso.

For Father Melo, this environment of threats contributed to the consolidation of the political pact of impunity led by President Juan Orlando Hernández, which began with the conclusion of the Mission of Support against Corruption and Impunity in Honduras (MACCIH), the implementation of the new Criminal Code and the control of resources approved to deal with the emergencies caused by COVID-19 and the hurricanes.

At the heart of the political pact of impunity is the fear induced in the Honduran citizenry by the lack of any real data showing the impact of the pandemic in the country, by the messages broadcast on the national radio and television networks, the curfews, the repression and the imprisonment of water defenders such as Guapinol.

“This Political Pact of Impunity is the instrument that is leading the current electoral process,” he said, explaining that this pact has led to the definition of two Honduras’. The first is that of a deep humanitarian crisis, expressed in the increase in mass migration, rising violence and unemployment, devastation due to levels of environmental vulnerability, and precariousness in the health and education system. This is not a temporary crisis, but a structural or fundamental one, which will determine the reality of the years to come.

According to economic analysts, in 2020 eight out of ten Hondurans were living in poverty. “This Honduras humanitarian crisis has left millions of people in a state of absolute calamity. The more people in misery there are, the more they have the Impunity Pact working for them to control or capitalize on their supporters or followers through small donations, bonds and solidarity gifts,” said Father Melo.

The other Honduras is the one that leads the political electoral process, “which has led us to believe that all problems are solved at the ballot box, therefore, whoever is outside the electoral process is not Honduran and is not a threat, that is why everyone is enlisting, looking for popularly elected positions or supporting candidates for favors,” he said, explaining that the two Honduras’ are connected by a bridge, and the keys to open the doors to the bridge are held by those in power, led by Juan Orlando Hernández.

Those in the pact in power have led the various sectors involved in the electoral process to accept the rules of the game, despite the illegalities that are present in the financing and the presidential election. Moreno believes that maintaining this division between the two Honduras’ is a strategy of the pact, because the contenders in the elections go in for votes and win, while forgetting about the victims, the migrants, the unemployed and the hungry.

Father Melo believes that in 2021, the country will continue to experience the dramatic split of humanitarian crisis and electoral process, predicting that it will be a year of strong and useless political confrontations, which will occur because the structural problems of at least the last decade have not been resolved, and because all the candidates will want to obtain a share of power in some state institution.

In view of this scenario, Father Melo believes that the organized citizenry, in alliance with international organizations, should promote and encourage the United States, with the change of government and in the framework of its fight against drug trafficking and corruption, to lock up Juan Orlando Hernández and his closest collaborators so that they can be brought to justice. This should be accompanied by assistance to the country in combating the impunity pact and strengthening Honduran institutions.

Another scenario would be the creation of an authentic and broad electoral political alliance where all the opposition sectors agree to form a coalition in order to confront the political pact of impunity, which is the National Party and the entire conglomerate around it, and which seeks to give continuity to the authoritarian policy of extractive activities and corruption. “If this alliance is not created it will be very difficult to break with that pact,” he stressed.

He ends by saying that these scenarios assume an external factor coming from the United States and an internal one through the electoral political alliance leading to a possible fraud and a proposal for a multiparty, pluralist government to restore democracy in Honduras.