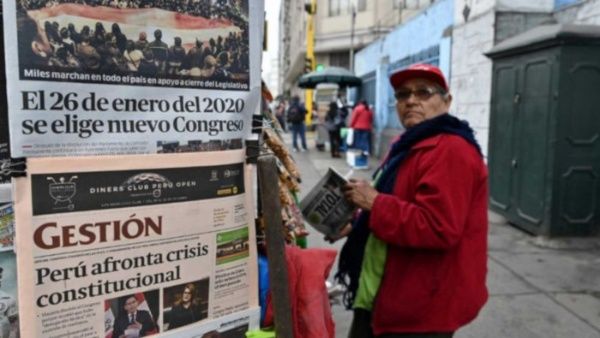 So far, neither the OAS nor the government of the US president, Donald Trump, have ruled against the violation of Ecuadorian human rights or the confrontation of powers in Peru.

The institutional and social crises that erupted this week in Peru and Ecuador showed, in addition to the democratic fragility in the region, that there is a double standard with which the mainstream media and international organizations, such as the OAS, treat the Latin American situation.

In Peru, President Martín Vizcarra announced last Monday the dissolution of Congress, the power of the State that lacks political support, so none of his initiatives progressed.

The Peruvian Congress, in response, did not consider the dissolution to be valid and approved on Tuesday the suspension of the head of state, to immediately proceed to swear in as interim president to Vice President Mercedes Araoz, who 24 hours later submitted her resignation.

In Ecuador, President Lenín Moreno unveiled a series of economic measures that directly affect the pockets of workers and the people immediately named it the “paquetazo” (big package).

Before the protests that arose immediately on a national scale, Moreno decreed Thursday a state of exception, for 60 days – which can be extended – that suspends the individual guarantees of Ecuadorians, such as the right to free transit, assembly and association. That is, it prohibits anti-government demonstrations.

US silence and the OAS
Neither the president of the United States (USA), Donald Trump, nor any of its officials have made statements against the violation of Ecuadorian human rights or the confrontation of powers in Peru.

In an article published on the website of Mision Verdad it is highlighted that “the powers of the West do not seem to give much credit to the Peruvian Guaidós, perhaps Vizcarra’s mandate does not resonate with them or they prefer that nobody in the region overshadows the Venezuelan experiment, however worn it may be.”

The analysis, signed by Rebeca Westphal, stressed that around the clash between Vizcarra and the congressmen, the Organization of American States (OAS) “refused to whitewash the operation, recognizing the Constitutional Court of Peru as the only entity to settle the conflict. Nor was there a major international uproar over the dissolution of parliament.”

She stressed that in Venezuela the existence of the National Assembly was maintained, “despite its contempt and strong support for US interference, without this meaning the loss of government control of the country.”

She pointed out that it was Peru that coordinated the efforts of several Latin American countries – gathered in the Lima Group – to give “a regional legitimacy” to the strategy of international blockade applied by the Trump administration against Venezuela.

On Ecuador, voices have emerged in social networks that make evident the differential treatment granted by the OAS when it comes to Venezuela.

“What does @ Almagro_USA2015 say? A Democratic Charter for Ecuador!!!

What does @jguaido – vermin say? Don’t they ask for democracy for Ecuador? And for Peru? How soon these masks fade! The

@OEA_oficial, like the body of #GrupoDeLima, zero credibility ”, can be read in a tweet from the user @ mostrenco2.

The Secretary General of the OAS, Luis Almagro, has chosen not to refer to the limitation of the individual guarantees of Ecuadorians and has limited himself to publishing tweets supporting the candidacy of Costa Rica to the United Nations Human Rights Council and criticizing the Venezuela’s aspirations to join that body.

Featured image: A citizen observes the headlines of the newspapers about the institutional crisis in Peru. | Photo: RTVE