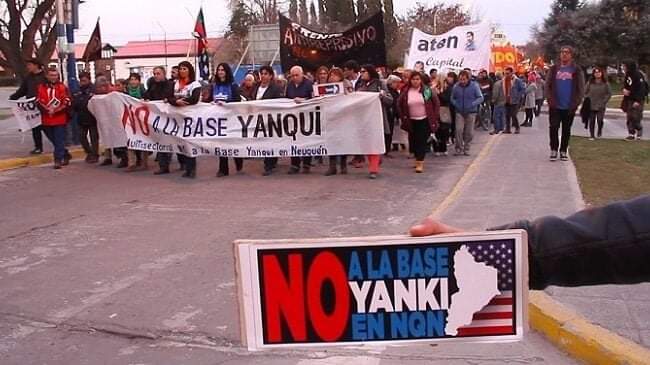 About 60 organizations marched against the construction of a US base in Neuquén, Argentina.

On September 30, a protest caravan, mobilized by a multisectoral grassroots movement against the installation of a so-called US “humanitarian base” in Neuquén city, marched to the proposed construction site of the US base. “No to the Yankee base in Neuquén” was the main slogan chanted by the demonstrators.

More than 60 Mapuche and human rights organizations plus workers unions and political parties constituted the multisectoral movement in Neuquén which commemorated Independence Day with an extensive caravan of over hundred cars that went from the center of the capital of Neuquén province to the site where the offices of the so-called Emergency Operational Committee (COE) are planned to be set up.

The protest began around 10:30 a.m. local time. The demonstrators decorated their cars with slogans and banners and marched to the plateau via an extensive tour. They began their slow march along Argentina Avenue, and continued through the streets Leloir, Doctor Ramón, Colón, Abraham Avenue, Novella, Casimiro Gomes and finally the north highway. The protest caravan held a symbolic ceremony in front of an oil services company, where a statement was read, and the Neuquén and Alto Valle chapters of the Mothers of Plaza de Mayo organized a symbolic shutdown.

At the start of the car caravan, Micaela Gómiz, secretary general of the Association of Teachers of the National University of Comahue (ADUNC), said a few words.

Councilor Francisco Baggio from the Neuquino Front also gave his remarks at the start of the protest.

The video below shows that work has now resumed on what will be the new US military base in South America, this time in Neuquén.

The grassroots organizations oppose the agreement between the provincial government of Neuquén, the government of Argentina and the US embassy, which is to donate $2 million in “humanitarian aid” and to “construct the offices of the Emergency Operational Committee (COE).” Given the complaints, the government has reported that the area will be under the control of the Civil Defense Directorate of Neuquén province.

However, the anti-military base movement holds the opposite to be true, and a group of opposition representatives in the provincial assembly have presented a bill that prohibits the installation of military, scientific or any other type of bases belonging to the United States government or related to it.

The intention of the legislators is to repeal any legal norm issued by the province’s executive branch authorizing the installation of any such base.

The document signed by the over 60 organizations of the anti-US base movement affirms that, although “the base is presented to be for humanitarian aid,” it is clear that it has been done in order to avoid “presenting it as a military base,” since, that way, “it would need approval of the National Congress.”

The multisectorial movement insists that “such an assertion forces us to ask ourselves what humanitarian aid can the US can provide, when we know that if they wanted to protect us against catastrophes, the logical thing would be that the base should not be installed in Neuquén, which is not prone to eruptions or earthquakes.”

In the following video, Mapuche leader Jorge Nahuel made statements at the construction site against the installation of the base.

In subsequent statements to Vaconfirma, Nahuel reiterated that the demand of the movement is that decisions should take into account the existence of “a plurinational and multicultural State, which encompasses the first nations of Argentina and all its inhabitants.”

Nahuel argued that the base “will be to fulfill a strategic intelligence objective of the US military, which intends to protect its corporate interests. Patagoia is an inexhaustible source of resources and the companies that exploit those resources are US companies. That is what they are coming to take care of.”

The Mapuche leader added that to him, it seems “a mockery that they are calling this a humanitarian base, when such a procedure has been repeated in other regions of the continent, where the US army enters with the excuse of providing advice, support or logistics for natural emergency issues, and then they install themselves and generate a militarization of the region, violating the principles of sovereignty and independence.”

Nahuel also criticized former President Mauricio Macri because “he gave up all sovereign principles, and today we see ourselves totally subordinated in economic, cultural and political terms to the mandates of the imperial nations.”

For his part, Omar Gutiérrez, governor of Neuquén province, denied that the site is destined for future military operations. According to the official description provided by the provincial government, the building will serve to house members of the Civil Defense and local Emergency Committee in cases of drastic situations such as floods or volcanic eruptions, among others.

The attempt to install this base coincides with strong US interests in the Neuquén basin. One of the last announcements by former Minister of Energy, Juan José Aranguren, was the visit of US Secretary of Energy, Rick Perry, to Vaca Muerta, famous for shale oil and shale gas deposits. Shell CEO and former official Perry broke the news of said visit in Bariloche, announcing it during the conclusion of the G20 preparatory meeting.

In that meeting Perry had stated that “Macri’s policies are in line with the values of the United States in terms of competition and innovation.”

Featured image: Protest against construction of US base in Neuquén, Argentina. Photo: vaconfirma.com.ar