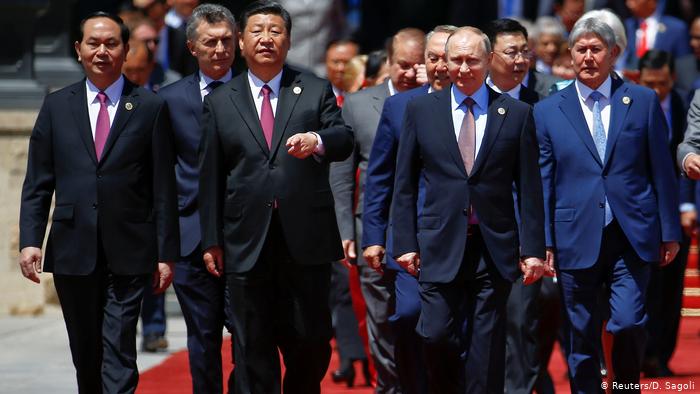 Markets are reeling from Trump’s declaration via Twitter that tariffs will be increased from 10 percent to 25 percent on $200 billion worth of Chinese goods. This is happening in the same week in which U.S. Navy destroyers sailed near islands in the South China Sea claimed by China, and as the Pentagon published the 2019 China Military Report. The report says China is building an army capable of global intervention and accuses China of conducting espionage in order to accumulate military knowledge.

“What’s happening is that China is finally going global,” Richard Sakwa told The Real News Network’s Sharmini Peries. “[China] is leveraging its growing economic power into a network of relationships which are spanning not just Eurasia all the way to Europe, but also in Africa.”

Sakwa noted that while China is now developing a second military base, the United States has approximately 600 military bases around the world: “China is challenging not so much U.S. primacy but the way that it has managed it in the past, which is an almost exclusive sense that the United States is the global leader. Well, those days are beginning to come to an end.”

Peries added that Chinese-Russo relations are expanding. Russian President Vladimir Putin was recently invited to be the guest of honor at a recent OBOR forum, and at many of the sessions, Putin and Chinese president Xi Jinping entered the sessions together. It speaks to a nuanced and limited alliance—one much of the West underestimates.

Meanwhile, U.S. relations with China are deteriorating. Sakwa explained that neither China or Russia will be provoked by U.S. “sabre-rattling.” As is typical, he said, the current situation is a Trump miscalculation based on his tendency to go into negotiations heavy-handed and hope a deal works out, which has massively failed due to his tariff tweets.

“I’m not sure that the policy makers in Washington have fully come to terms with the way that the geo-tectonics at the global level are changing, and the One Belt, One Road initiative is the prime example of that,” Sakwa said.

Story Transcript
SHARMINI PERIES It’s The Real News Network. I’m Sharmini Peries coming to you from Baltimore. Markets are still reeling from Trump’s declaration that tariffs will be increased from 10 percent to 25 percent on $200 billion-worth of Chinese goods starting just this week. This is happening in the same week in which the US Navy destroyers sailed near the islands claimed by China in the South China Sea, and as the Pentagon published a report accusing China of conducting espionage in order to accumulate military knowledge and building an army capable of global intervention.

Chinese foreign policy, however, is currently focused not on the US, but rather westwards towards Central Asia and Europe as the One Belt, One Road Initiative advances in leaps and bounds. It appears to be a modern resurrection of the ancient Silk Road. President Putin of Russia was the guest of honor at a recently held forum of the Belt-Road Initiative. Now, some of you might have read about the growing Russo-Chinese relations being embodied in the two leaders, President Xi Jinping and President Vladimir Putin, who met five times last year and even celebrated birthdays together. On to talk about all of this with me today is Richard Sakwa, who was recently in Beijing. Richard is a Professor of Russian and European Politics at the University of Kent, and an Associate Fellow of the Russia and Eurasia Program at Chatham House, and has written several, many books on this topic of Russia, Eurasia, and so forth. Richard, so good to have you with us.

SHARMINI PERIES All right, Richard. Currently, China has one offshore military base in Djibouti. Now with this One Belt, One Road Initiative, it plans on building another one in Pakistan. Is this, in your opinion, a legitimate move to secure trade, or is China using its trade advantage to expand its military influence among the countries who were involved in the One Belt, [One] Road Initiative?

RICHARD SAKWA Yeah. The Chinese would say about the Djibouti base that it isn’t actually a base, it’s a staging post. So they also compare their one or possibly two developing bases to the United States’ 600 scattered globally. What’s happening is that China is finally going global. You talk about the Belt and Road Initiative, which is in fact in some ways a synonym for Chinese foreign policy, the way that it’s leveraging its growing economic power into a network of relationships, which are spanning not just Eurasia all the way to Europe, but also in Africa. It’s say, it’s a step change and it’s a sign that China is not assertive as much, but it’s changing and it’s reflecting the growing multi-polarity, certainly, the multi-polarity in an international system. China is challenging not so much US primacy, but the way that it’s managed it in the past, which is an almost exclusive sense that the United States is the global leader. Well, those days are beginning to come to an end. They’re not ended, but they’re beginning to come to an end.

You also mentioned Trump’s imposition of tariffs up from 10 to 25 percent. This is part of what US policy makers initially thought was a limited intervention. What Trump has done, certainly Trump wanted, very focused, to go in, as he often does, quite heavily and then, get to some sort of deal. But what he has inadvertently done, is opened up the whole issue of American policymakers who have been arguing for a long time about China needing to change its fundamental relationship between the state and business. So while Trump went in for certain relatively limited ends, he has now opened the door to a much larger issue about the very nature of Chinese political economy. And in short, it seems that he’s lost control of the agenda.

SHARMINI PERIES All right, Richard. Now off the top, I mentioned that the growing Russian-Chinese relation is intensifying. It’s embodied in the two leaders, Putin and Xi Jinping. And on top of that, recently, he was invited, Putin was invited to be the guest of honor at a Belt [and] Road Initiative forum. Tell us about that growing relationship and what this means.

RICHARD SAKWA This Belt and Road forum took place in Beijing. It was the second. The first one took place two years ago and they’re scheduled now every two years. And it was quite demonstrative that at all the major sessions, Putin and Xi Jinping would walk out together, and it was deliberate because these things in these countries are not staged by accident. It was a sign that even if pressure is coming from the United States and other powers—the European Union also has certain trade issues with China and in the United Kingdom, for example, a major scandal, of course, about the participation of Huawei, China’s leading electronics company, in 5G development. And as we know, there’s a big debate whether Huawei should be at the core of 5G development because the implication is that it may possibly be a backdoor to these systems, which Chinese security services could exploit. So, a lot of issues going on there.

The Russian-Chinese alignment is not an alliance, and it’s not a bloc, and it’s certainly not a military alliance, but the Russo-Chinese alignment is far deeper, far more extensive, and far more extensive than many Westerners have yet caught on. It’s an alignment in which Russia and China will not do each other any harm, they will support each other when it’s in their interests, and it’s a game changer. This is Kissinger in reverse. As you remember, in the early 1970s, Kissinger brilliantly managed to exploit the split between Moscow and Beijing to United States’ advantage. Today, the Beijing-Moscow alignment—not an axis, not an alliance— is far deeper. And when Trump came to power, he had, I think, a sensible idea, which was, I think, given to him by Kissinger to try to peel Russia away from this alignment with China, and to align Russia more closely with the United States. Of course, he was blocked in this because of Russiagate and various scandals, US domestic politics. And so, the exact opposite has happened, that this Belt and Road forum just recently demonstrated just how close Russia and China have become.

At the same time, another development in the Belt and Road is this, what used to be called the 16+1. That is, China and 16 European countries, about half a dozen of them in the European Union. Just recently, Greece has signed up to it, so it’s now 17+1. This has, in many ways, underestimated the enormity of the way that the geopolitical chess pieces, if you like, as Brzezinski used to call them. Speaking of Brzezinski, he used to call them realigning. Greece is now part of the European Union, of course. Yet, it’s funding—the Piraeus Port outside Athens is owned by a Chinese company and in fact, owned by Ningbo, the port where I was just a few weeks ago. It’s an enormous game changer and I’m not sure that the policy makers in Washington have fully come to terms with the way that the geo-tectonics at the global level are changing. And the Belt and Road Initiative is the prime example of that.

SHARMINI PERIES So Richard, on top of all of this that you are talking about, we have a situation where the relations with China and the US are deteriorating. The Pentagon’s report is alarming. The naval maneuver to send a destroyer ship to the South China Sea is all, of course, intensifying. Are these signs of the US trying to provoke some sort of response on the part of China? And will they respond to this kind of aggression on the part of the US?

RICHARD SAKWA I think the Chinese, just as much as Moscow, they understand perfectly well that they must not respond in a symmetrical manner. It would be disastrous for both. I mean, the talk in Moscow for years has been that— even I just read a recent article by some military people in the US who are arguing that they need to provoke Russia into a new arms race which would then, of course, be catastrophic economically. The same applies to China. So the United States sending these ships out there is obviously going to annoy the Chinese leadership. It won’t make trade talks any easier. But the Chinese, as with the Russians, they will not be provoked by this sort of saber-rattling at this point unless—neither side wants to escalate at this moment.

Of course, Venezuela is very much another fly in the ointment because both Russia and China have significant investments over Venezuela, and it’s not just the economic side of things. It’s also the political idea of deciding that you don’t like the regime. China has invested far more than Russia, about $70 billion, in Venezuela in recent years. Russia, about $17 billion, so it’s a different scale. Both are concerned that they will lose their investments if there is this regime change. But for them, of course, is most important, the principle of traditional sovereignty and the idea that the United States can change a regime when it feels, leaving aside the domestic issues, is uniting them yet again in a position against the United States.

SHARMINI PERIES All right, Richard. We will leave it there. I feel like we are somewhat aborting a conversation in which so much more could be said, but we are hoping that you will join us again very soon and we’ll be able to continue this discussion. Thanks for joining us today.

SHARMINI PERIES And thank you for joining us here on The Real News Network.