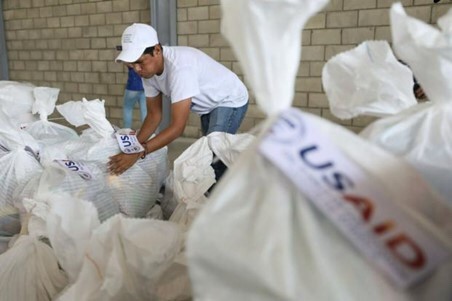 In recent times the international media, including many who promised to “resist” the dangerous commander-in-chief Donald Trump, have been awash with stories about Nicolas Maduro blocking US “humanitarian aid” reaching Venezuela. Maduro is said to have even blocked a bridge in his desperation to starve his own people (see, for example, CNN, CBC, Associated Press, BBC, NPR, ABC, Bloomberg, The Guardian). A constant flow of stories such as this have served to establish a narrative of a dictator blocking a benevolent US government from helping its desperate people. Something must be done!

Virtually unreported in the humanitarian aid story are several inconvenient truths that contradict the official US government narrative the media is so closely parroting. Firstly, the “aid” is not recognized as such at all. For shipments to qualify as aid, they must be given indiscriminately. The US “aid” appears destined only for Juan Guaidó, the US-backed self-appointed president. The Red Cross and the United Nations have refused to help the US or to recognize Trump’s shipments as aid. Indeed, the United Nations has formally condemned the US’ actions in Venezuela. For their part, the Venezuelan government has been very eager to accept genuine aid, and is currently working with the UN to distribute supplies.

The UN Human Rights Council denounced Trump’s sanctions (illegal even under OAS law), noting that they specifically target “the poor and most vulnerable classes”, calling on all member states to break them and even began discussing reparations that the US should pay to Venezuela. The sanctions have had a devastating effect on the country’s economy, reducing its oil output by 50 percent, according to the opposition’s own economics czar. Furthermore, Trump has threatened anyone breaking the sanctions with up to 30 years imprisonment. One UN special rapporteur described the sanctions as akin to a medieval siege and declared them a “crime against humanity.” Thus, much of Venezuela’s crisis is actually manufactured in Washington, though you would be extremely hard pressed to understand that from mainstream coverage.

The appointment of the notorious Elliott Abrams should be a major red flag for anyone believing that the US government’s actions are benign. Abrams was responsible for organizing death squads across the region in the 1980s that carried out mass slaughters and genocide in Central America and was also prosecuted for selling arms to Iran to fund the Contra death squads, famously sending them weapons under the guise of humanitarian aid. History now repeats itself, as the Venezuelan government intercepted a shipment from Miami containing assault weapons, ammunition and military-grade radios on a Boeing 767 that had made nearly 40 round trips from the US to the region this year alone. Thus, the person famously caught for sending guns under the cover of aid to Nicaragua may already be sending guns under the cover of aid to Venezuela.

In short, there is more than ample reason for Venezuelans to be highly skeptical of any help the US claims to be offering, especially considering the terrible harm the US has wrought on its economy. The $20 million shipment of “aid” is a drop in the ocean in comparison to the effect of the sanctions, estimated to be tens of billions of dollars. The “aid” therefore constitutes about what Venezuela loses every eight hours due to the sanctions. The very obvious thing any American with a genuine desire to help the Venezuelan people would advocate is to end the illegal sanctions and begin paying reparations.

Yet all this has been almost completely ignored by the mainstream media, marching in lockstep with the Trump administration’s regime change agenda. Instead it presents a socialist dictatorship intent on spurning good faith US efforts to help its stricken people in an attempt to establish the grounds for escalation of US actions in the country. In 2017 the US blocked genuine Venezuelan aid to the victims of Hurricane Harvey. Yet this was not seen as the justification for an invasion of the US.

The final piece in this farcical puzzle is that the bridge Maduro supposedly blocked to stop aid reaching the country has, in fact, never been opened and the barriers blocking the way have been in place since at least 2016, as five minutes on Google would have shown. Yet virtually the entire media – so obsessed with fact-checking everything Donald Trump says – went along with his administration’s PR stunt. That it was immediately exposed as a hoax meant nothing to the media outlets in question, who have not deleted or modified their stories since publication. Printing fake news about official enemies will not result in a ban from Twitter or deletion from Facebook, it seems. However, merely expressing an alternative opinionhas done.

The Venezuelan case proves the lie that the media genuinely cares about honest reporting, countering fake news and resisting Trump. When it comes to serving an imperial agenda, all is jettisoned out the window in favor of regime change propaganda.