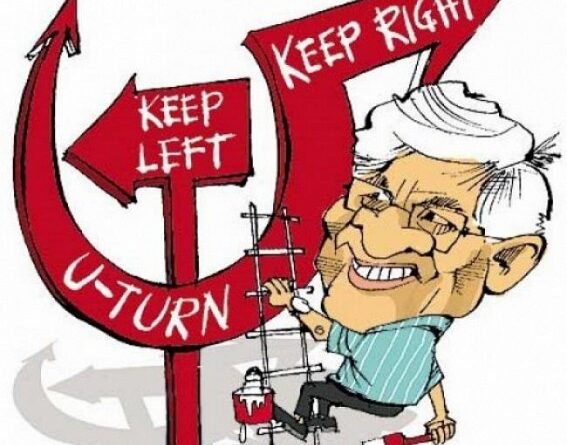 In recent weeks, expressions referring to political expiration dates have become fashionable. President Nicolás Maduro has made the expression “trasnochada” [leftover] a trend, which is still uncomfortable, sarcastic or funny (depending on who looks at it), if one takes into account that the right (both awake and asleep) has considered—not now, but always—Chavismo as a left that was left out overnight.

I have made an effort to remember, and have come to the preliminary conclusion that referring to the left with that leftover term is a custom that the Adecos [members of the Democratic Action (AD) party] of the 1970s implanted, although perhaps it was a previous invention by the author of “hampoducto” and “multisapidas,” Rómulo Betancourt, father of Venezuelan bipartisan democracy [founder of AD] and several other monsters (I mean linguistic ones).

(It’s very possible that Betancourt gave birth to this expression, since he was a Marxist in the 1930s, when he signed the Barranquilla Plan, and then an anti-communist renegade, a favorite of the gringos in the backyard, but that escapes my memory).

Since the ’70s, the “leftover” appellation was assigned more than anything to the parties that didn’t immediately embrace the pacification policy initiated by Rafael Caldera. Following that, the expression has been linked to those determined to move forward with a project that has already failed: to make the revolution in the Cuban way, for example, assembling the peasant masses for insurrection with rifles against the status quo.

And here is the most ironic aspect of the current popularity of the phrase: one of those parties that refused to admit the defeat of the mythical armed struggle was the Socialist League, a party in which—according to official biographies—began the political journey of the current head of state. In fact, when a large part of the left was already on the path of puntofijismo (elections every five years, electoral fraud, and made-in-the-USA repression for those who got creative), the League and its armed apparatus, the Organization of Revolutionaries (OR), were living dangerously and paying the consequences in the most brutal way. Recall Jorge Rodríguez Sr.

In the ’80s the “leftovers” catchphrase suited the social-Christian government of Luis Herrera Campíns very well, which was dedicated to the export of henchmen to Central America, who were busy there staying up all night to torture and kill real or suspected Marxists, including cabezacaliente [hotheaded] priests and nuns—another word, incidentally, used to attack those who fight for social justice.

“Leftovers” also fell into use by that gentleman Jaime Lusinchi in the glory days of the AD. In his flowery speech, Lusinchi invented a variant of the hotheads, the “mentes calenturientas” [hot minds].” Great. By the way, that president was very given to late nights, but not for ideological reasons, for alcoholic ones.

Now—and here we are treading on thorny terrain—the accusations against the leftovers reached their maximum intensity during the second government of Carlos Andrés Pérez, when the charismatic leader leaped over a barrier that most didn’t know existed: the one dividing the social democratic right from the neoliberal right—that right that never sleeps or lets the poor sleep.

Pérez, who blindly trusted his own leadership, thought that he was going to perform the miracle of implementing a monetary-fund adjustment plan without doing any damage. But it turned out that, twenty days after his famous coronation [his second inauguration in 1989], they almost burned the entire country down, to say the least [with the Caracazo].

That was a stellar moment for the denouncers of the supposed excesses of the leftovers, since the chaotic uprising of the Caracazo was against what was sold worldwide as the most exalted expression of modernity [neoliberalism]. Whoever opposed the neoliberal recipe was more than outdated, a dinosaur in the process of extinction, that hadn’t yet read Fukuyama.

The repression that was then unleashed upon those who participated in the rebellion and, later, against everything that smelled of ñángara [leftism], was truly representative of state security in the democracy of the Fourth Republic. It is a pity that some of the repressed at that time had their hard drives erased.

The golden age of anti-leftover accusations came in the late 1980s and throughout the 1990s, as a result of the fall of the Berlin Wall and the disintegration of the Soviet Union.

Faced with such a heap of ruins, remaining a socialist was, indeed, an endeavor that invited bullying, although that word was not yet used. The triumphant and high-minded right felt fully entitled to mock, not only of those who had Marxist ideas, but anyone who even thought about social demands, including the most moderate reformism.

Even worse, at that time those who continued to be active in the parties considered to be left, those who had been pacified in the ’70s and ’80s, joined the campaign against the leftovers. Emblematic of these characters was Teodoro Petkoff. It is true that he had always spoken with disdain of the other left (the one different from the MAS, which he baptized as “el chiripero”), but it was during his tenure as minister of Caldera II [Caldera’s second term] and his conversion to IMF neoliberalism that he really devoted himself to lashing those who continued to speak of material conditions and class contradictions. Petkoff reached the pinnacle of this line of thinking when he wrote his self-righteous book Only the Stupid Don’t Change Their Mind. In other words, for him, in the last stage of his political career, the left was not leftover or outdated, but instead stupid.

Amid the fevered shift to neoliberalism, attacks were made on those who were not members of leftist parties, but who had, for example, participated in groups or union organizations with a reputation for holding ideals of social equality, suc as the National Union of Workers of the Press and the National Guild of Journalists. In the media newsrooms of that day, a depressing phenomenon occurred to us: the owners of these media waged a war to destroy collective bargaining (somewhat démodé, according to them) and the infantry of that war argued that ex-leftists, according to the dominant ideas, had not become outdated at all, but had updated themselves very well, and had opened their eyes and were now on the right. It was common for those characters, hot heads that had cooled down, to say things to you like: “I understand your struggle, compa, it is very noble, but in today’s world, sadly, nothing can be done anymore. Better get on the train of individual contracts and forget about those outdated ideas, I tell you as a friend.”

The leftover accusations levied against the military that carried out February 4 [1992’s failed coup, led by Chávez] deserve not one, but many separate paragraphs. Criticism of the uprising rained down from the ruling right and from the domesticated—and scared—left , describing the attempt as an outdated version of ’60s protests although—we continue with the bitter ironies—many of those leftist veterans who joined the chorus had participated in those protests.

When the Movimiento Bolivariano Revolucionario-200 mutated into the MVR and decided to go the electoral route, there was another round of insults based on the leftover theme. Practically the entire campaign of the traditional parties against the Hugo Chávez phenomenon in 1998 was based on the thesis that, if he won, the country would enter a stage of outdated doctrines.

The fame of some of Chávez’s civilian companions, such as Luis Miquilena and JR Núñez Tenorio, helped to give some credibility to the accusation of supposed left obscurantism. In any case, the media manipulations were of no use because Chávez passed over all those rickety parties, and furthermore, in the case of Miquilena it would later be shown that he wasn’t really from the left (neither from the outdated nor from the other).

The rabid anti-communism that has characterized the opposition since 1999 was accentuated in 2001, with the approval of the Land and Agrarian Development Law and 48 other laws labeled archaic for being popular and egalitarian in nature. In April 2002, with that accusation at the ready, the old right and the “new” launched their plan to overthrow the government, and spent 47 orgiastic hours drunk with power. Then they had no choice but to go to sleep, and when they woke up, paraphrasing Monterroso, the commander [Hugo Chávez] was still there.

Neoliberals and the “updated leftovers” got even heavier-handed in upbraiding outdated ideas when Chávez, at the iconic Botanical Garden rally, declared the Bolivarian Revolution socialist. Since then, and until the leader of the process left this plane of existence, he was always accused of being an outdated communist, an accusation that, by extension, touched—and continues to touch—all his immediate collaborators, even some who were never on the left.

In short, after reviewing the half-century history of the “leftover” expression,” hearing it repeatedly from Nicolás Maduro can be understood in two ways: as one more paradox of life and politics; or a sign that the president and his government have moved (unintentionally) into a space previously occupied by the old puntofijo parties, the domesticated left of the ’70s and ’80s, the euphoric neoliberals of the ’90s, and the jilted right of the 21st century.

Seen in this way, it is a very bad place for someone to stand who, on the other hand and in terms of real politics, is fiercely opposed to US imperialism and its nefarious European and Latin American satellites and lackeys.

It is—and this is no more than the opinion of someone who’s been a leftover— a very unfortunate phrase, which carries with it a very gruesome history with which only all those previously listed can identify. Very uncomfortable!