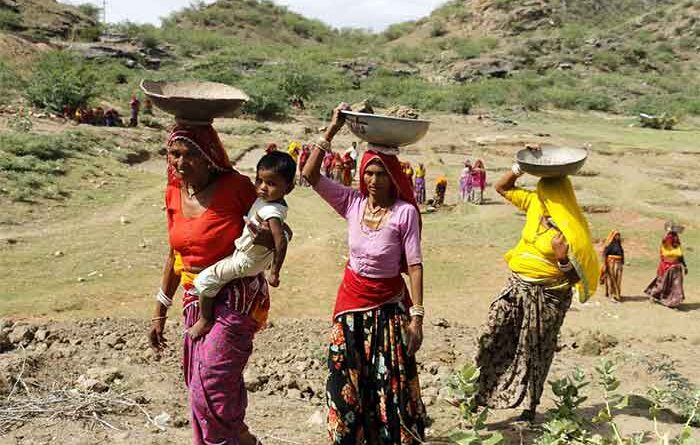 According to International Labour Organization’s (ILO) July 2021 policy brief, “Building Forward Fairer: Women’s rights to work and at work at the core of the COVID-19 recovery”:

“Globally, between 2019 and 2020, women’s employment declined by 4.2 per cent, representing a drop of 54 million jobs, while men’s employment declined by 3 per cent, or 60 million jobs…in 2021, the number of employed women is projected to be 13 million less than in 2019, while the number of men in employment is projected to be about the same as in 2019…Only 43.2 per cent of the world’s working-age women will be employed in 2021, compared to 68.6 per cent of working-age men. In other words, in 2021 women will be still 25.4 percentage points less likely to be in employment than men.”

Women have seen disproportionate job and income losses due to two reasons. First, they are over-represented in the sectors hit hardest by lockdowns, such as accommodation and food services; real estate, business and administrative activities; manufacturing; and the wholesale/retail trade. These sectors are labour intensive and employ millions of female low-paid, low-skilled workers. In 2020, 527 million women, representing 41% of total female employment, were employed in these sectors, compared to 35% of total male employment.

Second, the pandemic disruptions shifted child care and schooling into people’s homes, leaving women to take on that burden on top of other responsibilities. This unbearable load forced many employed women to quit their jobs to care for kids and other relatives. As the ILO paper says, “COVID-19 has increased care demands within households on an unprecedented scale…women continue to bear the brunt of unpaid care work…This has led women who remained in employment to cut down on paid working hours or to extend their total working hours (paid and unpaid) to unsustainable levels.”

The concentration of women in the lowest paid jobs in labour-intensive factories and an intensifying crisis of household labour are interrelated, closely tied to the dynamics of capital accumulation. Under capitalism, the stability of the working class family depends on the employment of at least one of its adult members. Sex differentiation – the unequal power and prestige associated with male and female roles – and sex stratification – the sex-based division of labour within and outside the domestic space – result in women’s over-representation in low paid, low skilled jobs.

While capitalism inherits patriarchal gender norms from oppressive divisions of labor in earlier class societies, it also strengthens them by separating domestic and wage labour. In capitalist societies, unpaid activities such as cooking, cleaning, provisioning of basic household needs, child care, care of the sick and the elderly, as well as community-based activities are largely seen as the responsibility of the women. This unpaid work in social reproduction subsidizes men’s wages by lowering their socially necessary cost of living, which in turn increases the share of surplus value in the total value created in the capitalist mode of production.

The sustained utilization of women’s unpaid work for capitalist profit-maximization can only be maintained through the cultural whiplash of patriarchy, which structures the lives of women around the domestic space. In 1969, Margaret Benston wrote:

“In a society in which money determines value, women are a group who work outside the money economy. Their work is not worth money, is therefore valueless, is therefore not even real work. And women themselves, who do this valueless work, can hardly be expected to be worth as much as men, who work for money…At all times household work is the responsibility of women. When they are working outside the home they must somehow manage to get both outside job and housework done (or they supervise a substitute for the housework). Women, particularly married women with children, who work outside the home simply do two jobs; their participation in the labor force is only allowed if they continue to fulfill their first responsibility in the home.”

In a time of socio-economic catastrophe like COVID-19 pandemic – which results in a fall in real wages – women are expected to maintain the proletariat’s living standards by a hidden intensification of their domestic labour. The qualitative changes that can relieve the family of care for dependants – like the collective provision of childcare, cooking, housing, education, health – can only be gained at the expense of capitalist profitability and they will therefore meet strong resistance from the ruling class. Therefore, employed women turn to family formation as an alternative to waged work. This pushes them into a subordinate position, dependent on an employed husband or partner.

Women’s lopsided presence in economically vulnerable and low-paying jobs further weakens their ability to continue with waged work in times of crisis. Far from overcoming the sexual division of labour or valuating reproductive work, the massive incorporation of women into the sectors of the global economy has only cemented unequal power relations. Employers prefer female over male workers because preexisting patriarchal structures provide capital with extra leverage over women workers; misogynist relations are not eliminated but grafted onto expanding capitalist relations.

The reproduction of women’s oppression at the economic level primarily manifests itself in a gender pay gap, which provides a material basis for the continuation of androcentric views. As Johanna Brenner and Maria Ramas write, “even when…wives work, husbands do not expand their domestic labour. The traditional ideology (‘domestic life is her responsibility’) strengthens men’s position and undermines women in the conflict over who will have how much free time. But this ideology is underpinned by the reality that even when she works, he makes more money and she cannot afford to push him too hard. If the marriage breaks up, she will end up financially worse off.”

As is evident, women’s immurement within domestic work and their entry into labour markets are mutually reinforcing processes. To break out of this restrictive armature, we need to completely reorganize social production. The severance of the working class from the means of production results in the separation of the family unit from production. This means that private domestic labour is structurally necessary under capitalism. In what other way could a class of neo-slaves, deprived of any control over the means of production, reproduce itself from one day to the next?

Equal opportunity of jobs outside the home, while one of the preconditions for female emancipation, will not in itself be sufficient to provide women with full-fledged freedom. In the words of Benston:

“[A]s long as work in the home remains a matter of private production and is the responsibility of women, they will simply carry a double workload…A…prerequisite for women’s liberation…is the conversion of the work now done in the home as private production into work to be done in the public economy…To be more specific, this means that child rearing should no longer be the responsibility solely of the parents. Society must begin to take responsibility for children; the economic dependence of women and children on the husband-father must be ended. The other work that goes on in the home must also be changed – communal eating places and laundries for example. When such work is moved into the public sector, then the material basis for discrimination against women will be gone.”