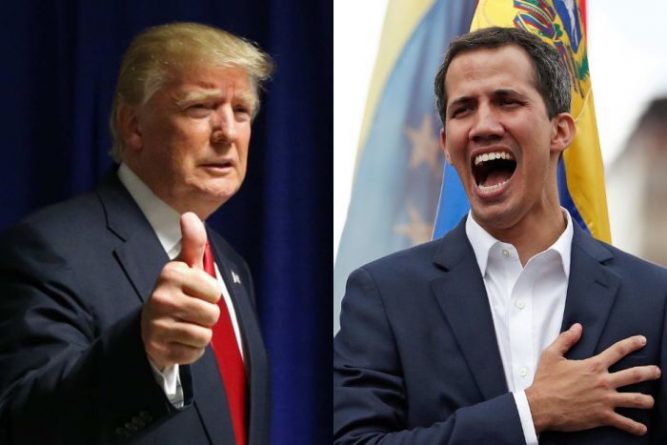 Political analyst Steve Ellner draws the parallels between Trump and the Venezuelan opposition.

Michael Cohen’s statement last Wednesday that he fears Trump would not concede defeat in the 2020 elections has sparked concern about the breakdown of basic rules of democratic electoral politics. Indeed, as far back as the 2016 presidential elections, Trump refused to vow that he would recognize the official results if Hillary Clinton were to be declared winner. Obama responded by saying “that is dangerous.”

There is an appalling similarity between the situation playing out in the U.S. and Venezuela. Under the Chávez and Maduro governments, both presidents pledged to accept the official electoral results even if they favor the opposition (as the Chavistas did in 2007 and 2015), but the opposition refrained from following suit. Indeed, in a number of elections (2004, 2005, 2013, 2017, 2018) the opposition refused to recognize the announced results. If both Trump and the Venezuelan opposition were highly skeptical of the electoral process before hand, they should not have participated in the first place. It’s like one sports team claiming that the umpire or referee is highly impartial. If that’s the case, they shouldn’t be playing ball.

The Venezuelan opposition’s recent launching of a shadow government headed by Juan Guaidó is thus just the latest in its ongoing refusal to play by the established rules of the game nearly since Chávez was first elected president in 1998. Now, more than ever before, the opposition is controlled by the radical right in the form of Guaidó’s party Voluntad Popular.

The anti-Maduro narrative coming from both the Venezuelan opposition and Washington paints the picture of a repressive undemocratic South American government with an opposition that is simply calling for democracy. Naturally, our sympathies have to lie with the “democratic” opposition. But in Venezuela, the situation is more complex and the overlap in the tactics and rhetoric of the Venezuelan opposition and the U.S. right is startling. Both the Venezuelan opposition and the U.S. right threaten the use of extra-legal means with possible violent outcomes. Fox News commentator Sean Hannity, for instance, reacted to demands for Trump’s impeachment with a call for “every honest patriot to take to the streets.” Just as in Venezuela, those who call for street mobilization in certain contexts know full well that there is a dynamic at play in which those protesting may well resort to violence.

Venezuela is now on the verge of a civil war because in addition to occasional excessive force on the part of security forces, opposition leaders have promoted protests that frequently result in widespread destruction of public property and fatalities: 70 odd public transportation vehicles seriously damaged as were several metro stations and public buildings during the 4-month long protests in 2014 along with the killing of 6 national guardsmen and 2 policemen; and attacks on an air force base in Caracas and police stations in the state of Táchira during four months of supposedly “peaceful” protests in 2017.

Similarly, the United States could well slide into a situation of widespread violence due to the refusal of Trump and his allies to respect the rules of the game. Joshua Geltzer, a former senior official of Obama’s Justice Department set off controversy when he advocated that electoral college members be required to pledge acceptance of electoral outcomes and that the chairman of the Joint Chiefs of Staff should reaffirm loyalty to the constitution. True to form, Trump and his allies of the ilk of Sarah Palin struck back at Geltzer. An October 2017 poll conducted by the company that makes the game “Cards Against Humanity Saves America” reported that 33 percent of people in the U.S. fear that a civil war in the nation is “likely” in the coming decade. The figure among Democratic Party voters is over 40 percent.

Trump and the Republicans have something else in common with the Venezuelan opposition. They support neoliberal formulas in which the private sector governs the economy without any state interference: that means mass deregulation in the case of the U.S. and mass privatization in the case of Venezuela. This is an additional reason why the Democrats, who uphold different views on economic policy, should be reluctant to heap praise on the Venezuelan opposition, which is for the most part on the right side of the political spectrum.

The standard differentiation between the democracy of “developed” Western nations and the “underdeveloped” third-world ones has become misleading in the age of Trump. The notion that Venezuelan opposition leaders are the “good guys” and champion Western-style democracy and the Venezuelan government is authoritarian and represent third-world backwardness – Washington’s narrative accepted by the mainstream media – is even more deceptive.

In short, Trump and his allies are now living up to the worst of the stereotypes of third-world political leaders at the same time that they rely on some of the same tactics as those employed by the Venezuelan opposition. The end result in both nations in which the right has become a major player is instability and an erosion of people’s faith in democracy.

Steve Ellner is a retired professor from Venezuela’s University of the East and currently associate managing editor of Latin American Perspectives. Among his over a dozen books on Latin America is his edited “The Pink Tide Experiences: Breakthroughs and Shortcomings in Twenty-First Century Latin America” (Rowman & Littlefield, 2019).