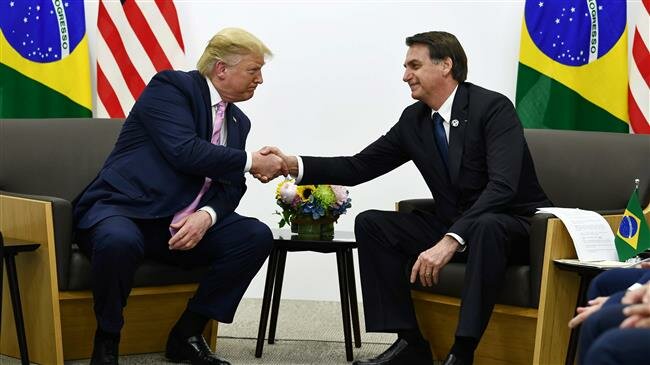 US President Donald Trump has designated Brazil a so-called major non-NATO ally of the United States, a move that could potentially facilitate the expansion of Washington’s dominance over the Latin American country.

“I hereby designate the Federative Republic of Brazil as a major Non-NATO Ally of the United States for the purposes of the Act and the Arms Export Control Act,” Trump said in a memorandum issued by the White House late on Wednesday.

The US’s non-NATO allies are not members of the military alliance but still have priority access to the US weapons market and are allowed to enhance military-to-military ties with America.

Egypt, Israel, New Zealand, and Taiwan are some of the US’s other allies that are not members of NATO.

The US president told his Brazilian counterpart, Jair Bolsonaro, at a White House meeting in March that he was “very strongly” considering Brazil’s membership in NATO.

Bolsonaro is an avid admirer of Trump and his policies, particularly those against Venezuela, Nicaragua, and Cuba.

The right-wing Brazilian president has been dubbed “Tropical Trump” because of the traits that he shares with the American president, notably his populist agenda.

Trump also said on Tuesday that his administration was working with Brazil on a new free trade agreement that would lower tariffs.