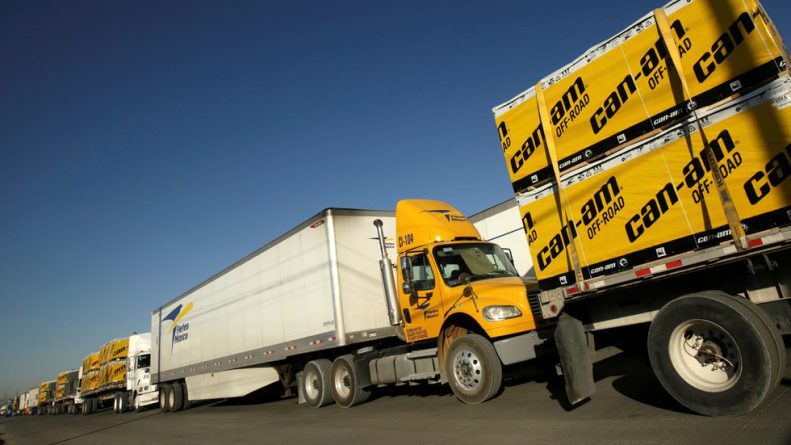 A five percent tariff on all goods coming from Mexico will go into effect on June 10, and will gradually increase up to 25 percent until the illegal immigration problem is resolved, US President Donald Trump has announced.

This appears to be the “big league” announcement on the border Trump had teased earlier in the day, prior to delivering a commencement speech to the US Air Force Academy in Colorado Springs.

….at which time the Tariffs will be removed. Details from the White House to follow.

Invoking the International Emergency Economic Powers Act, Trump said the US will start at five percent, but keep ratcheting up by another five percent every month, culminating with 25 percent beginning in October.

Tariffs will permanently remain at the 25 percent level unless and until Mexico substantially stops the illegal inflow of aliens coming through its territory.

The decision whether to remove the tariffs will be “determined in our sole discretion and judgment,” Trump added.

Full statement from @POTUS on 5% tariff on Mexico: ‘I am invoking the authorities granted to me by the International Emergency Economic Powers Act. Accordingly, starting on June 10, 2019, the United States will impose a 5 percent Tariff on all goods imported from Mexico.” pic.twitter.com/UklkcL3FRR

RELATED CONTENT: Nicaraguan Government Makes Headway for Peace with No Help from the Opposition

“No, I’m not closing the border. I’m doing something else,” he said. “And it will be my biggest statement, so far, on the border.”

After his trip to Colorado Springs, Trump tweeted a video from the US Border Patrol showing over 1,000 migrants being apprehended after crossing over from Mexico illegally, calling it the “largest group of illegal aliens ever.”

Yesterday, Border Patrol agents apprehended the largest group of illegal aliens ever: 1,036 people who illegally crossed the border in El Paso around 4am. Democrats need to stand by our incredible Border Patrol and finally fix the loopholes at our Border! pic.twitter.com/6K1rIUzorM

“Mexico cannot allow hundreds of thousands of people to pour over its land and into our country—violating the sovereign territory of the United States. If Mexico does not take decisive measures, it will come at a significant price,” said the White House statement announcing the tariffs.

In response to the announcement, the Mexican peso took a nosedive in relation to the US dollar, and the Mexican government said it would respond “vigorously” to the “disastrous” threat, AFP reported. The US imported $350 billion of goods from Mexico in 2018.

Trump mentioned the possibility of closing the border last month, and there was a frenzy of speculation in the media about a possible new asylum policy, but the tariff announcement seems to have come as a surprise.

In February, after Democrats blocked all attempts to fund the construction of the border wall through appropriations, Trump invoked national emergency powers to reprogram funds from other government agencies. This caused Congress to approve a joint resolution opposing his emergency declaration for the first time in history of the US presidency, but it did not have enough support to override Trump’s veto. The case is now being dragged through federal courts.