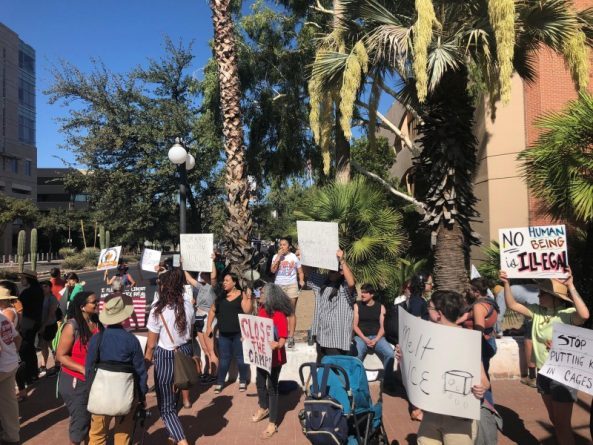 Tucson, AZ – Over 100 people braved the intense desert sun Tuesday morning, July 2, to demonstrate their anger at Trump’s threat for ICE raids aimed at thousands of undocumented families. Many demonstrators also expressed their demand to reunite families and to close the concentration camps operating as detention centers.

Outside the federal building protesters held signs reading “Close the camps!” and “Dismantle ICE!” The group then marched to the Pima County Office to demand an end to the Sheriff’s collaboration with ICE and Border Patrol. Organizer from Coalición de Derechos Humanos, Isabel Garcia, said “The county’s decision to participate in Operation Stonegarden and the terrorizing of immigrant families is just criminal. We must demand they stop this immediately.”

RELATED CONTENT: “Help me please. My son is dying”: Mother Pleads for Medicine and Food at Mexico’s Detention Center

That same morning also saw the federal government begin a second prosecution of humanitarian aid provider Scott Warren. After a hung jury succeeded in defeating the political repression efforts of the Trump administration, Warren is now facing two charges of “harboring illegal aliens.” The sentencing for such charges could result in ten years.

It is clear Trump and his team are targeting not only refugees and undocumented families but also those who seek to aid them.