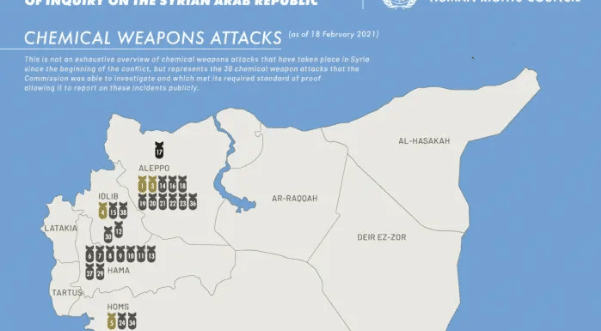 The UN Commission on Syria does not consider as proven the alleged chemical weapons attack in April 2018.

Criticism of the OPCW general secretary
A controversial report by the Organization for the Prohibition of Chemical Weapons (OPCW), a United Nations body, on an alleged chemical weapons attack by the Syrian army in early April 2018 is being questioned by a committee of the United Nations itself.

According to German media outlet Telepolis, the Geneva-based UN Commission of Inquiry into the Situation in Syria does not consider the April 7, 2018 incident in Douma as a proven chemical weapons attack by the Syrian army. The commission thus indirectly contradicts the OPCW report, which, according to a number of former employees of the organization, has been manipulated.

The OPCW, headed by Fernando Arias, had blamed the alleged use of chemical weapons on the Bashar al-Assad government and the Syrian Arab Army, and censored findings by experts who had carried out investigations on the spot for the OPCW that contradicted this thesis. The OPCW thus provided a justification for airstrikes on Syria carried out by the US, UK, and France.

After the alleged chemical attack in Douma, in the outskirts of the capital, Damascus, the bodies of around 50 civilians were recovered. The USA, the UK, and France bombed facilities of the Syrian government and the Syrian army just a few days after the event—while the OPCW investigation was still underway.

In response to a request by Telepolis, the Secretariat of the UN Commission on Syria has confirmed that “the April 7, 2018 incident in Douma is not counted among the 38 chemical weapons attacks in Syria listed in the Commission’s A/HRC/46/54 report“. The Commission was able to investigate those 38 attacks “with what we believe to be the required standard of evidence”, the response continued.

Thus, the UN Commission on Syria does not recognize the controversial final report of the OPCW.

German ex-diplomat calls for revision of the OPCW report
The former German UN diplomat Hans-Christof von Sponeck told Telepolis a few weeks ago that the OPCW report should be revised. Von Sponeck expressed his opinion on the case in September after the BBC withdrew its own report on the OPCW critics as a misrepresentation. “The BBC’s admission will be followed by others,” remarked the former diplomat.

Von Sponeck is one of the co-founders of the Berlin Group 21, an association of experts who are committed to clearing up the allegedly falsified OPCW report. The group made headlines last year after a British member responded to alleged contact by Russian intelligence services. The contact later turned out to be bogus. The Berlin Group 21 has since disassociated from that member.

The group’s website says that it is acting out of concern over the protracted controversy and political fallout surrounding the OPCW report and the investigation into the alleged chemical weapons attack in Douma, Syria in April 2018:

Since the publication by the OPCW of its final report in March 2019, a series of worrying developments has raised serious and substantial concerns with respect to the conduct of that investigation. These developments include instances in which OPCW inspectors involved with the investigation have identified major procedural and scientific irregularities, the leaking of a significant quantity of corroborating documents, and damning statements provided to UN Security Council meetings. It is now well established that some senior inspectors involved with the investigation… reject how the investigation derived its conclusions, and OPCW management now stands accused of accepting unsubstantiated or possibly manipulated findings with the most serious geo-political and security implications. Calls by some members of the Executive Council of the OPCW to allow all inspectors to be heard were blocked.

The inspectors’ concerns are shared by the first Director General of the OPCW, José Bustani, and a significant number of eminent individuals have called for transparency and accountability at the OPCW.

Von Sponeck told Telepolis that “the evidence that has now become publicly available, that the OPCW, with the support, or rather, under pressure, of Western countries, has played a dangerous game of falsification, is striking”. His group, therefore, still remains in contact with the United Nations and other international organizations in order to reach a clarification.

Letters to UN bodies
In this context, the members of Berlin Group 21 have now reached out to the UN Human Rights Council and the UN Commission on Syria. In letters published on the group’s website and made available to Telepolis in advance, the experts have raised serious allegations against the OPCW General Secretary Fernando Arias.

In June, Arias rejected in hearings before the UN Security Council the call made by several dozen experts for an independent commission of inquiry into the Douma incident and the alleged manipulation of the OPCW.

Thus, Arias misleadingly attempted to defend the conclusion of the OPCW report, and falsely claimed that the UN Syria Commission came to the same conclusion as his organization, note the letters of Berlin Group 21.

“This assertion by the director general [of OPCW] is deceptive,” wrote Berlin Group 21 in a letter to the Chairperson of the UN Human Rights Council, Nazat Shameem Khan. “Neither of the Commission’s 2018 reports present any firm or final conclusions regarding chlorine being used as a weapon in Douma and do, in fact, raise concerns shared by us and the inspectors regarding the likelihood of chlorine gas being the cause of death of the 43 civilians at Douma.”

In one of the Commission’s 2018 reports, which Arias referred to before the UN Security Council, the possible use of chlorine gas is mentioned. However, it goes on to say that “ this in and of itself does not explain other reported symptoms, which are more consistent with the use of another chemical agent, most likely a nerve gas. The Commission’s investigations are ongoing (A/HRC/38/CRP.3: p. 14).

The members of Berlin Group 21, in their letters to Nazat Shameem Khan and the UN Commission on Syria, assert that “it should be a source of shame and embarrassment for the United Nations that, to date, no serious attempt has been made to respond to the repeated calls from eminent individuals and organisations for transparency and accountability at the OPCW regarding its controversial Douma investigation.”