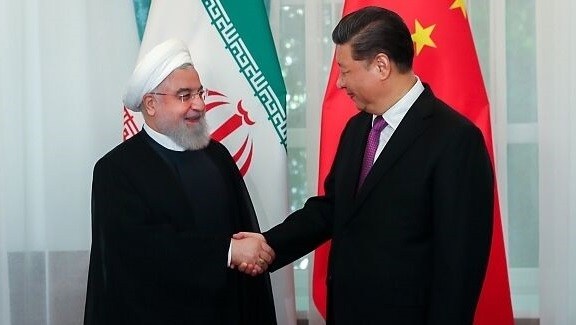 The Trump administration’s claims Iran attacked oil tankers in the Gulf of Oman were quickly debunked, with the ship’s crew saying it “was hit by a flying object.” But the US disrupted important Iranian diplomatic efforts at the Shanghai Cooperation Organization summit in Bishkek, Kyrgyzstan.

The Donald Trump administration’s evidence-less accusations against Iran have fallen apart within a matter hours. But these US allegations did manage to disrupt an important meeting of Asian leaders at the Shanghai Cooperation Organization summit, where Tehran was hoping to make diplomatic breakthroughs to ease a crippling American economic blockade.

On Thursday, June 13, two oil tankers traveling through the Gulf of Oman on their way to Japan suffered from mysterious explosions. The cause of the incident was not clear.

The US government claimed without evidence that Iran was responsible for supposed “attacks” on the vessels. Trump administration officials accused Iran’s Revolutionary Guard Corps (IRGC) of damaging a Japanese tanker with a mine.

But by the morning of Friday, June 14, the narrative had fallen apart, with the Japanese cargo company, Kokuka Sangyo, telling journalists that the US government’s version of the story was simply bogus.

“The crew is saying that it was hit by a flying object,” explained the president of the company, Yutaka Katada. “They are saying that something came flying.”

“To put a bomb on the side is something that we are not thinking,” he added, in comments at a press conference.

UPDATE: The owner of the Kokuka Courageous tanker says its crew saw “flying objects” before the attack, suggesting the ship wasn’t damaged by mines pic.twitter.com/jyn8BEfHep

The US military published video of what it claims is an Iranian boat crew removing an unexploded mine from the hull of the Japanese tanker Kokuka Courageous.

But the company’s president insisted in remarks reported by Reuters that it was not an Iranian mine but rather two “flying objects” that damaged the ship.

“The crew told us something came flying at the ship, and they found a hole,” Katada reiterated. “Then some crew witnessed the second shot.”

Reuters noted that the “tanker was attacked near the Strait of Hormuz, a major strategic waterway through which about one-fifth of global oil consumption passes on its way from Middle Eastern producers including Saudi Arabia, Iraq, the UAE and Kuwait as well as Iran.”

The company president added, “This strait is very crucial. Without this route we can not transport gasoline and heavy oil to Japan.”

Sabotaging Iran’s diplomacy with Asian leaders
Iran’s foreign minister, Javad Zarif, shot back at the Trump administration’s allegations on Twitter. Zarif accused the White House of seeking to “sabotage diplomacy” and “cover up [American] economic terrorism against Iran” without offering “a shred of factual or circumstantial evidence” to back up their claims.

I warned of exactly this scenario a few months ago, not because I’m clairvoyant, but because I recognize where the #B_Team is coming from.

As The Grayzone reported, the US government’s accusations against Iran arrived as Prime Minister Shinzo Abe became the first Japanese leader to visit Tehran in four decades.

The Trump administration also issued its unsubstantiated allegations a day before an even more important meeting of the Shanghai Cooperation Organization, a pan-Asian political and economic alliance that brought together the leaders of the world’s largest countries.

President Rouhani met with his counterparts at the SCO summit in Bishkek pic.twitter.com/kB8ek8LkeQ

On June 14, Iranian President Hassan Rouhani joined President Xi Jinping of China, President Vladimir Putin of Russia, Prime Minister Narendra Modi of India, and Prime Minister Imran Khan of Pakistan, among other leaders, at the regional summit in Bishkek, the capital of Kyrgyzstan.

The US government’s accusations may have at least partially derailed Iran’s diplomatic efforts, as Modi cancelled a bilateral meeting with Rouhani at the last minute, allegedly due to “scheduling issues.”

Until the Trump administration illegally violated the international Iran nuclear deal (known officially as the JCPOA) in May 2018, India had been the second-largest purchaser of Iranian oil. But US threats of secondary sanctions forced India to cut Iranian oil imports.

Rouhani and Modi have recently discussed efforts to create a new mechanism through which India can pay in rupees for Iranian oil, thereby bypassing American sanctions.

#ChinesePresident in the meeting with #PresidentRouhani : #China will promote steady development of ties with Iran no matter how the situation changes internationally. pic.twitter.com/l8XjzrTi94

At the summit, Rouhani also met with Putin, and called for closer ties between Iran and Russia.

On the sidelines of the #SCOSummit in Bishkek, the President discussed Russia-Iran relations with Iranian President Hassan Rouhani https://t.co/JOwSWTd8s1 pic.twitter.com/Dk8tzVTegI

Foreign Minister Zarif tweeted that Rouhani was in Kyrgyzstan for the summit, noting he had “Important multilateral dialogue” and “fruitful bilateral talks” with Xi and Putin.

“Unilateral US actions—incl. its #EconomicTerrorism on Iran—are solely responsible for insecurity & renewed tension in our region,” Zarif added.

Unilateral US actions—incl. its #EconomicTerrorism on Iran—are solely responsible for insecurity & renewed tension in our region.

In his speech at the summit, Rouhani condemned the United States for international aggression.

“The US government over the last two years, violating all the international structures and rules and using its economic, financial and military resources, has taken an aggressive approach and presents a serious risk to stability in the region and the world,” the Iranian president said.