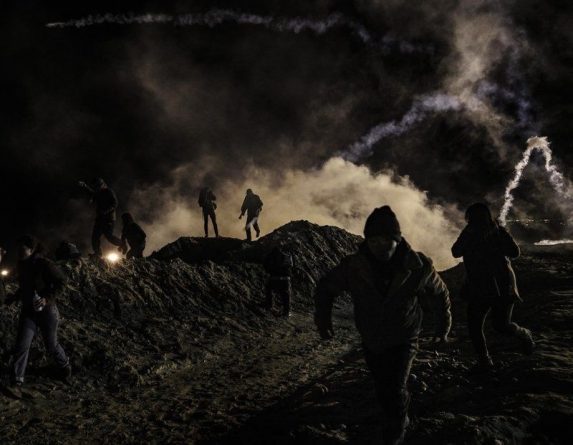 “No agent saw any of the migrants in the fence, including children, experiencing the effects of chemical agents, which were thrown at people throwing rocks in a distant place, “the statement said.

A photographer for The Associated Press witnessed at least three gas discharges thrown onto the Mexican side of the border, near the beach, that affected migrants, including women and children, as well as members of the press. The AP saw that rocks were thrown only after US agents threw tear gas.

CBP said that the agents saw “children of the size of infants” being passed over the barbed wire with difficulty. He stated that his agents could not help the children because they threw rocks at them. The officers responded with smoke grenades, pepper spray and tear gas, he added. The AP journalist also saw plastic pellets fired by US agents.

The agency reported that 25 migrants were arrested, while others returned to Mexico through a hole in the border fence.

CBP said that in accordance with its policy on the use of force, the incident would be reviewed by its Office of Professional Responsibility.

Some migrants who spoke with the AP said they arrived in Tijuana last month with the caravan that left Honduras in mid-October.

This caravan reached 6,000 members during the month and a half that lasted his journey to the north. He has been a constant target of President Donald Trump, who mentioned it frequently in the days leading up to the mid-term elections in November.

Many of the migrants wait in Tijuana to request asylum in the United States, but there is a lag in the processing of petitions since before the caravan arrived, and the wait is expected to lengthen for months. Others have found employment in Mexico and have tried to settle.

In a previous incident, US agents fired tear gas into Mexican territory after some migrants tried to cross the border after a peaceful march organized in Tijuana on November 26. Hundreds of migrants were affected by the gas.

Trump is embroiled in a dispute with Democratic lawmakers about financing the border fence he plans to build. The dispute has resulted in a partial closure of government operations.