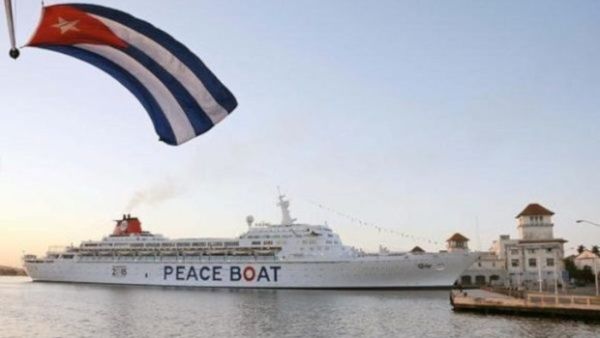 The Cuban president affirmed that the “illegal” Helms-Burton Act threatens peace and solidarity.

The Peace Cruise which transported aid for the victims of the tornado that affected Havana last January, was prevented from docking in Cuban ports due to the restrictions imposed by the Helms-Burton Act.

In an article published in Cubadebate, the ambassador of Cuba in Japan, Carlos Miguel Pereira Hernández, said that the “Crucero por la Paz” (non-governmental organization based in Japan) should arrive in Cuba on June 13, but it will not be able to enter the port, because the vessel is US-owned.

The pacifist NGO has already been in the largest of the Antilles on 19 occasions, as part of its work in favor of peace and against nuclear weapons.

“This is not the first time that absurd measures will prevent it from docking on the island, but as it happened in the past, sooner or later these and other actions will fail and the Peace Boat will return to Cuban lands with its message of Peace and solidarity”, affirmed the Cuban diplomat.

He explained that the ship was carrying “the modest donation” that the Cuban community living in Japan and Japanese friends sent in support of the victims of the tornado that hit Havana earlier this year.

The president of Cuba, Miguel Diaz-Canel, for his part, stressed that the “illegal” Helms-Burton law “also attempts against peace, solidarity, peaceful coexistence and friendship.”

“It is a law to neocolonize and enslave,” the Cuban president said in a message posted on his Twitter social network account.