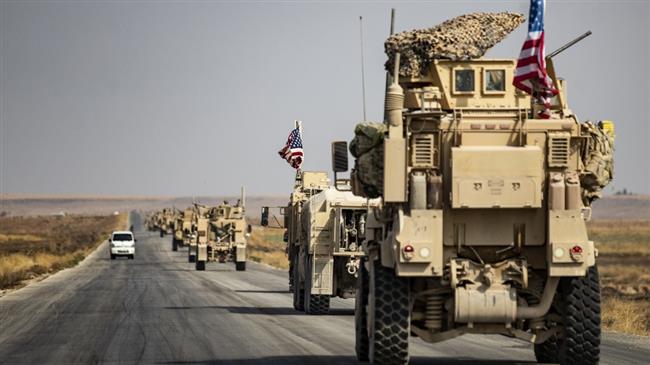 Dozens of trucks carrying Syrian wheat crop from Hasakah province have crossed the border into Iraq’s semi-autonomous Kurdistan region amid reports that the US military is systematically smuggling basic commodities out of Syria.

It came only two days after a convoy of over a dozen US military trucks left the same Syrian region for northern Iraq, reportedly carrying tens of tons of grain.

SANA reported at the time that 18 military vehicles rumbled through Semalka border crossing, and headed toward Iraq.

The US military has stationed forces and equipment in northeastern Syria, with the Pentagon claiming that the deployment is aimed at preventing oilfields in the area from falling into the hands of Daesh terrorists. Damascus says the deployment is meant to plunder the country’s resources.

Syrian Minister of Petroleum and Mineral Resources Bassam Tomeh told al-Ikhbariyah TV on March 18 that the US and Takfiri terrorist groups were looting the country’s oil reserves and that US troops controled 90 percent of oilfields in northeast Syria.

He said the cost of direct and indirect damage to the Syrian oil sector stood at more than $92 billion.

The US first confirmed its exploitation of Syrian oil during a Senate hearing exchange between South Carolina Republican Senator Lindsey Graham and former US secretary of state Mike Pompeo in late July last year.

Pompeo confirmed for the first time that an American oil company would begin work in northeastern Syria, which is controlled by militants from the so-called Syrian Democratic Forces (SDF).

After failing to oust the Syrian government through proxies and direct involvement in the conflict, the US government has stepped up its economic war on the Arab country.

RELATED CONTENT: A Decade Ago: US-NATO Invasion of Libya and its Consequences

Last June, the US enacted the so-called Caesar Act that imposed the toughest sanctions ever on Syria with the alleged aim of choking off revenue for the government.

The sanctions, however, have crippled the war-torn country’s economy by prohibiting foreign companies trading with Damascus.

The US and the Europeans had already banned export and investment in Syria, as well as transactions involving oil and hydrocarbon products.

Syria has said the real purpose of the measures is to put pressure on Syrians and their livelihoods — an inhumane attempt to suffocate ordinary people.

Officials also say the stepped-up smuggling of strategic Syrian resources is the latest inhuman tactic using people’s basic needs as a tool to pressure the government.

Featured image: US military vehicles drive along a road in the town of Tal Tamr in Syria’s northeastern province of Hasakah on October 20, 2019. (Photo by AFP)