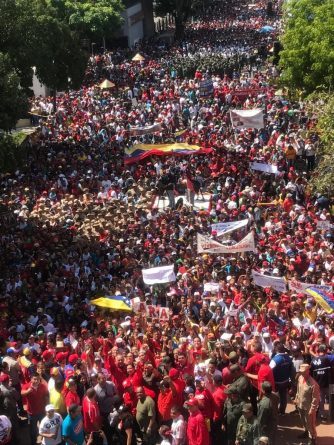 The U.S. government’s instant recognition of Juan Guaidó, who declared himself president of Venezuela on January 23, his feverish support by Trump, Pompeo, Pence, and Bolton; the European Union and Lima Group demanding President Nicolás Maduro’s ouster so the imperialists can usher in “democracy.”

This delusional scene could be straight out of Alice in Wonderland.

But Alice in Wonderland is a fantasy. The plot against Venezuela is a monstrous plan, the most brazen one by the U.S. government in decades: Plotting, directing, arming, financing the opposition, and preparing possible military intervention to complete its counterrevolution and return Venezuela to the status of a U.S. neo-colony.

War could be looming, the last remaining U.S. option after so many plots that have failed in 20 years to overthrow the Bolivarian Revolution. War, because the Venezuelan government and millions of people are not about to surrender to a foreign takeover of their country and imposition of the U.S. puppet Guaidó.

The United States, its European allies and the servile “Lima Group” are not seeking to replace Maduro for any notion of democracy. What they intend is the overthrow and abolition of all progressive gains achieved during the Bolivarian Revolution.

If the United States and the right wing Venezuelan opposition were to succeed, massive repression would follow against the revolution’s leaders, the people and revolutionary institutions. One only need review the Latin American military dictatorships of the 1960s and 1970s to envision such a scenario.

A three-pronged offensive is underway: economic, political and military. Trump and his henchmen have launched a “go for broke” offensive.

A White House press briefing was held yesterday. There, Treasury Secretary Steven Mnuchin announced action against PDVSA, Venezuela’s oil industry, and the seizure of all revenues generated by CITGO in the United States. That is $7 billion to start and $11 billion in revenue expected this year. It is the most devastating blow to date against the economy: More than 95 percent of Venezuela’s foreign income comes from oil.

Food, medicines and essentials for the population will be denied by blocking Venezuela’s oil income. They are already suffering from a longstanding imperialist offensive that has decimated the economy.

Mnuchin warned that the United States will use “the full suite of its diplomatic and economic tools to support interim President Juan Guaidó, the National Assembly and the Venezuelan people’s efforts to restore their democracy.”

Mnuchin further declared with particular arrogance that PDVSA can continue exporting oil to the United States, but Maduro’s government will be blocked from the funds.

In breaking news, The New York Times revealed today that Secretary of State Mike Pompeo secretly granted Guaidó complete access to Venezuela’s oil and other assets in the United States last Friday. That was just two days after Guaidó declared himself president, which he did after a phone call and orders from Mike Pence.

The Bank of England granted Guaidó’s order to withhold Venezuela’s gold in the bank, about $1.2 billion. The bank refused Maduro’s request for release of the gold, which is urgently needed for the country’s essential imports. The dispute over the gold in the BOE had been brewing for months, with opposition figures’ intervention. Now it is a fait accompli.

At the press conference, National Security Adviser John Bolton generated a sudden news buzz when reporters saw two lines written on his legal pad: “Afghanistan, welcome talks,” and “5,000 troops to Colombia.” Asked about it, he replied, “the president has made it clear, all options are on the table.” Bolton’s poised stance with his notepad did not look accidental.

Military plans in the region are underway. Radio Caracol of Colombia announced last night that General Mark Stammer, commander of the U.S. Southern Command, would arrive in Colombia within hours, accompanied by a military team to “strengthen the ties of friendship with Colombia, meet with the military and police leadership, and review the border.” Stammer said he will help develop regional strategies for security. Colombia has received billions of dollars in U.S. military aid over the past two decades and is home to at least nine U.S. bases.

Meanwhile, the cabal of Trump’s ultra-right conspirators is growing.

Elliot Abrams has been named Special Envoy to Venezuela by Trump. It is not a casual appointment. As one of the more rabid elements from the Reagan regime, the fascist Abrams helped engineer the brutal offensive to crush the revolutionary war in El Salvador and the Sandinista Revolution in Nicaragua in the 1980s.

He was key to the Iran-Contra operation, the Reagan scheme that secretly sold arms to Iran during the Iran-Iraq war. In turn those funds were used to arm the Nicaraguan fascist contras, who waged terror for 10 years, killing over 40,000 people. Abrams backed the genocidal dictator General Efraín Ríos Montt in Guatemala, fighting Congress to continue arming a regime that massacred tens of thousands of Guatemalan Indigenous people.

He has a history in Venezuela, too, as one of the actors in the failed 2002 coup against Hugo Chávez.

Although responsible for numerous war crimes under Reagan, Abrams was only convicted of lying to Congress. His record was wiped clean with a pardon by George H.W. Bush.

Today, Russian Foreign Minister Sergey Lavrov strongly criticized the U.S. government. “We are concerned about what the United States and its closest allies are doing with regards to Venezuela, brazenly violating all norms of international law and actually openly pursuing the policy aimed at overthrowing the legitimate government in that Latin American nation.” He noted that with the sanctions on PDVSA and exemptions for U.S. oil companies, “… they wish to topple the government and derive material gains from this.”

Despite the open calls by Trump officials to Venezuela’s military to defect, the military leadership has made it clear it is loyal to President Maduro and the Constitution. Sunday morning, a large contingent of FANB troops marched in formation near the Colombian border, led by Defense Minister Vladimir Padrino López, in an open display of support for the government.

Monday, Padrino López spoke before assembled troops in a Caracas base. “It is time for revolutionary, Bolivarian, patriotic activism. This is the activism that today empowers us in this new phase of defending our homeland. We are not going to hand it over! We are ready to die for it!”

Maduro announced the goal of 2 million militia members in 50,000 units by May, “in defense of all the neighborhoods, towns, cities and villages of the country. Onward National Bolivarian Militia, to organize the force of the people!”

While the opposition march supporting Guaidó on January 23 was massive, the pro-Maduro protests were huge and the largest in years.

Guaidó may have dreams of power and images of dollars dancing inside his head, but he is only a lackey for a U.S. takeover of Venezuela. His only program is that dictated by U.S. imperialism. Last Friday, after three days of hiding, Guaidó told a reporter that he would abolish the Great Housing Mission and the CLAP food distribution program that serves millions of Venezuelans. More than 2.5 million homes have been built benefiting 10 million people.

Therein lies the struggle: Either Venezuela’s great natural resources are in the hands of the people and the Bolivarian Revolution or in the grips of U.S. and European imperialism.

Last Wednesday, the very day of Guaidó’s declaration, an emergency protest was held by the ANSWER Coalition in front of the Venezuelan embassy in Washington, DC. Over three days, more than 20 rallies in support of President Maduro and against the U.S. coup plot rose up. Dozens of organizations came together in rallies in front of the White House, in New York City, San Francisco, Los Angeles, Chicago, Boston, Albuquerque, Seattle, Atlanta, Philadelphia, Dallas, Minneapolis, Indianapolis, Las Vegas, Salt Lake City, Springfield, MO, Boise ID, Tampa, Miami, Tallahassee, Miami and Sarasota, FL, Fayetteville AR, Sacramento, as well as Vancouver and other cities in Canada.

What is urgently needed is a sustained and broad movement to build the most energetic opposition to U.S. war in Venezuela and in support of the country’s sovereignty.

The Party for Socialism and Liberation pledges its full solidarity and commitment to be part of that movement, and to defend the Bolivarian Revolution and President Maduro’s government.