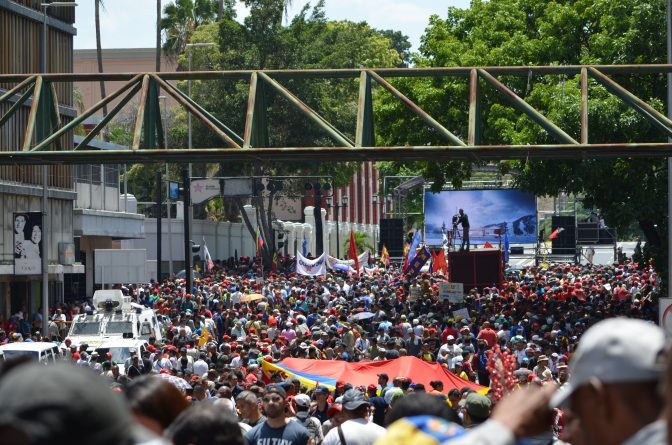 The comic strip of a coup d’etat in Caracas on April 30 deflated itself with the sunset that same day. No military action was required against it. In fact, most of rebel soldiers who had been tricked to be there at daybreak, realizing they were being used for a coup, talked to their commanders and went back to their barracks by midday.

The event should not be underestimated though, since it could have led to a confrontation among soldiers and a bloodshed if opposition soldiers attended massively to the place proposed by self-proclaimed president Juan Guaido. That was the objective that he had planned with Leopoldo Lopez -who was put under house arrest in July 2017 for inciting violence at the 2014 opposition protests and had just broken his house arrest-, both of them are members of Voluntad Popular party, well known due to its terrorist credentials. This just reaffirms not only a rejection to democracy but also the criminal nature, homicidal vocation, unscrupulousness in most of the Venezuelan opposition leaders, especially the self-proclaimed and his mentor Lopez, who is now being treated as a guest in Spain’s Embassy in Caracas after a brief participation in the skirmish. Those criminals may have thought that some deaths would be enough to achieve the long wished for breaking in Venezuela’s Bolivarian National Armed Force (FANB). The fact that a tragedy did not occur in Caracas on April 30 owes itself to the prudence, restraint and unity of action repeatedly proven in the face of these coups attempts by President Nicolas Maduro, his closest civilian allies and FANB high commanders.

The above describes the contrasts of Venezuelan opposition leaders’ irresponsibility, adventurousness and subjugation by the United States. It is more evident now than ever. Since his self-proclamation on January 23, Guaido has been in real-time tele- pompter by the Venezuela-team myth makers in the White House; Bolton, Pompeo, Abrams, Marco Rubio and Vice-president Mike Pence. By the way, pointing out the lies they said on April 30 would require an entire separate column.

It’s not surprising at all since this opposition demanded the US sanctions that have caused so much suffering and grief to the Venezuelan people. Guaido himself admitted that an imperialist military intervention is an option for him. Economic war imposes an incalculable human cost to our brothers and sisters in Venezuela. A recent report estimated that 40 thousand people would have died due to the U.S. sanctions. But these have just been hardened.

Imposing strong economic punishment on Venezuela and Cuba and then to blame their leaders for the subsequent effects is a cynical and shameless attitude on behalf of the power up North, openly violating the most basic international laws not to mention values of basic ethic. But their cynicism is also expressed in the fact that sanctions are aimed at spreading unrest and despair among the population so as to make them easy prey for coup plots and destabilizing plans conceived by the same minds that devised the sanctions.

Venezuela resists because, as it becomes more evident every day, Chavismo is a very efficient model of resistance. It can be seen in the political awareness and discipline of its grassroots, prepared amidst the anti-imperialist struggle, communes and socialist aspirations; the human sensitivity of its leadership. This is evident in President Maduro with his correct appreciation of the hardest situations and his correlation of local, regional and global forces, which allowed him to develop a very smart policy of alliances even during Chavez’s time.

The consequences of the coup attempt are what matter now. President Maduro said there will be no impunity and the truth is that Guaido was openly the instigator and holds the most responsibility for the attempt, including Leopoldo Lopez’s jailbreak. It is evident that following three months of the strongest pressures and threats, Venezuela’s Armed Forces continue to be solidly united, dismissing the possibility of a coup like the one fostered from Washington to overthrow Maduro. Furthermore, Guaido has not achieved any of the goals expected from him and his capacity to mobilize people, which has never been big, is on the brink of vanishing.

Now the United States has two options: direct military intervention or dialog and negotiations as proposed by Mexican President Andres Manuel Lopez Obrador, which would be the most convenient for all the parties involved. This is a very dangerous situation because responsibility and good sense are quite scarce in Washington. Based on Bolton and Pompeo’s huge lie about the alleged Cuban troops and military operations in Venezuela, Trump has already threatened the island with imposing a full embargo. Temperature is rising in the Caribbean. What a dangerous moment.