As part of the strengthening of bilateral relations between Venezuela and Algeria, the Venezuelan president, Nicolás Maduro, in joint statements issued with his Algerian counterpart, Abdelmadjid Tebboune, reported this Thursday, June 9, that both nations reiterated their solidarity and support to Palestine, the Saharawi Republic, and Libya.

Algeria is the second stop in President Maduro’s international tour, which previously took him to Türkiye, where he had a busy schedule of bilateral and cultural activities. For security concerns, related to the aggressive and violent policy of the White House to oust President Maduro, the complete itinerary of the international tour has not been disclosed, but many analysts speculate that a visit to Russia might be on the agenda.

The Venezuelan head of state said that both countries expressed “the strongest and most loving solidarity with the cause of the Palestinian people.” He also noted that both nations will enable their foreign ministries “to denounce the crimes that are committed daily against Palestinian children, women, and youth.”

Likewise, Maduro expressed his admiration for the “strong position of Algeria in the defense of the historical rights of the Saharawi people.” The two leaders vowed to continue their support for the struggle of the people of Western Sahara for their self-determination and their right to hold a referendum on their future status as an independent country. President Maduro urged the peoples of the world to “wake up and react … It is a time of solidarity and support.”

Similarly, he expressed concern about the situation in Libya, as scheduled elections approach: “We consider Libya a brotherly people and we hope that, sooner rather than later, safeguards are provided so that elections are held in which the Libyan people can exercise their sovereignty … and begin the reconstruction of an independent, sovereign and democratic Libya.”

During his visit to Algeria, President Maduro attended meetings to strengthen agreements and sign new ones in the sectors of science and technology, culture, communication, and tourism, among other issues.

The Algerian president reported that they also agreed to open, starting next July, commercial flights between Algiers and Caracas. 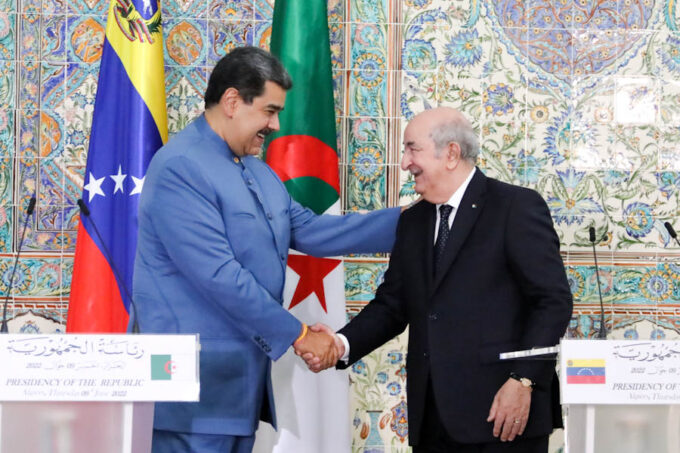 The Venezuelan president said that these talks in Algiers mark the beginning of a new stage in the relationship between both nations, towards union and shared prosperity.

He recalled that Algeria and Venezuela have solid relations based on a shared history in the struggle of their peoples for freedom and justice, and also share a common vision towards a world of peace, stability, and cooperation.