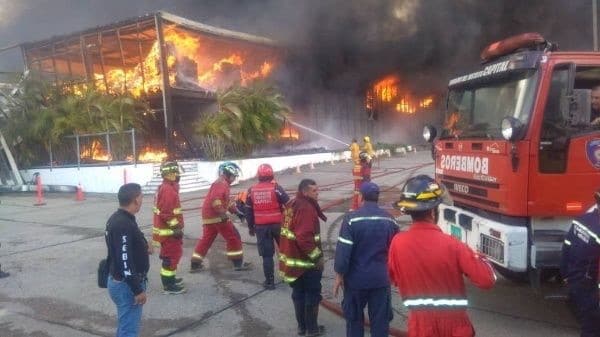 This Friday, the vice-president for Social and Territorial Development, Aristobulo Istúriz, denounced the biggest criminal act in the history of health in Venezuela, after the fire occurred on Thursday in the sheds of the Venezuelan Institute of Social Security (IVSS), in Guarenas, while the swearing in ceremony of President Nicolás Maduro before the Supreme Court of Justice took place. The statement was given at a press conference from the Simón Bolívar room at the Miraflores Palace, in company of the minister of the Popular Power for Health, Carlos Alvarado, the president of the IVSS, Magaly Gutiérrez, and the director of Civil Protection, Randy Rodríguez. “We are here to denounce before the whole country the biggest terrorist criminal act, that has been committed against the health in Venezuela in all its history. This fire was an act of barbarism against the humanism that threatens the people, which was caused this Thursday in the Social Security warehouse just when President Maduro was sworn in the Supreme Court of Justice,” Istúriz revealed. He noted that losses can not yet be calculated; However, he explained that supplies were ready for distribution in the warehouses, in them there was complete equipment of two IVSS hospitals.

Also, equipment for a dialysis unit that is about to open in Valle la Pascua in Guárico state. In addition to supplies for this treatment that are stored in these sheds to be distributed to 10 thousand 080 patients in the country, “all the material of two months was lost,” Istúriz said. “The area where the fire occurred is 22 thousand square meters, organized in 6 sheds of which two had total loss and the other 4 with some material losses,” Istúriz explained.

The National Risk Management System acted with more than 100 firefighters from the Miranda Government, Capital District and Zamora municipality, who controlled the fire with an average of water used exceeding 4 million liters, Istúriz said. Finally, he emphasized that President Nicolás Maduro ordered the immediate replenishment of all equipment and materials burned, as this is a crime against life of the Venezuelan people.