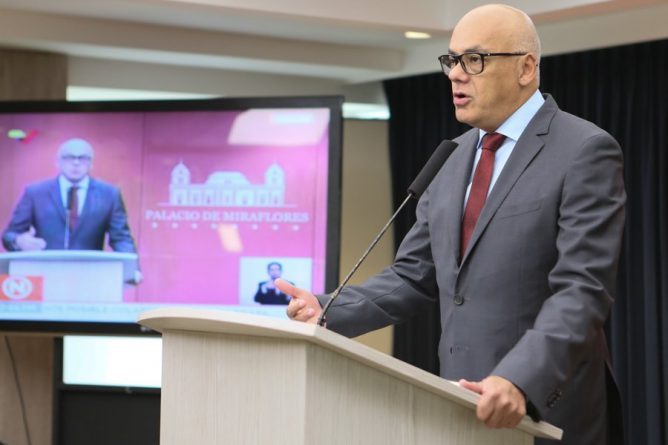 The Venezuelan Minister of Communications, Jorge Rodríguez, announced that on Friday, February 22 and Saturday, February 23 an massive concert will be held on the Simón Bolívar International Bridge, on the Venezuelan side, with the participation of a large number of national and international artists we want to give “a message for life and peace” to the whole world.

“We have welcomed the proposal of a large number of Venezuelan artists, who requested a cultural meeting, a great concert for peace, for life, with two slogans: one, the title of a beautiful song by Colombian singer-songwriter Martha Gómez , which is called ‘For the war nothing’; and the other one called ‘ Hands off Venezuela ‘ (Manos fuera de Venezuela)”.

He indicated that “we had to dedicate two days for the realization of this immense concert with the organizers”, due to the immense number of Venezuelan artists and other parts of the world who want to participate “in this message of love, solidarity, denunciation against the brutal aggression tried to be imposed on the Venezuelan people”.

A concert in the city of Cúcuta is also scheduled for February 22 , organized by the British businessman Richard Branson, owner of the Virgin Group labels and companies that group a part of the western cultural industry, with the supposed purpose of raising 100 million dollars to “alleviate the humanitarian crisis” in Venezuela. This concert will be held, according to the most recent information, at the Las Tienditas bridge .

On that concert, the Venezuelan Minister of Culture, Ernesto Villegas, said on Monday that it is ” a mechanism of cultural legitimization of the war very dangerous and disastrous. They are calling a concert on the Colombian side of the border, where they are making use of celebrities from the cultural industry and entertainment, to bless the military aggression against Venezuela. That had never been seen! ”

Food boxes and health days
On the other hand, Minister Rodríguez said that on July 22 and 23, 20,000 boxes of CLAP food will be distributed to residents of Cúcuta, and there will be free medical care days with pediatricians, surgeons and dentists, to attend ambulatory situations and as a demonstration of support to the people of Cucuta and Colombia.

“It seems that nobody pay attention to the people of Cúcuta”, of which he pointed out that they suffer many hardships and do not receive attention from their own president, Iván Duque. He noted that 40 percent of the Cucuteños (almost 300 thousand people) are in a situation of poverty , and 10 percent are in extreme poverty, according to figures from the National Administrative Department of Statistics of Colombia. The unemployment is approaching 20 percent, and almost 20 thousand children working on the streets. Almost 30 percent of hospitals in Cúcuta they are in technical closure, a normal delivery costs 500 dollars and many times the parturients go to the hospital of El Vigía or Ureña to be treated, said Rodríguez.

“If this initiative that we carry out crystallizes in those two days, we will continue to attend to the people of Cúcuta” who suffer “the consequences of savage neoliberalism,” said Rodríguez.

He recalled that in Venezuela live 5 million 800 thousand Colombians “who emigrated to this country fleeing from war, paramilitarism, drug trafficking and permanent aggression in more than 100 years of war.” Likewise, Venezuela received Spanish, Italian and other citizens who fled the wars in their respective countries.