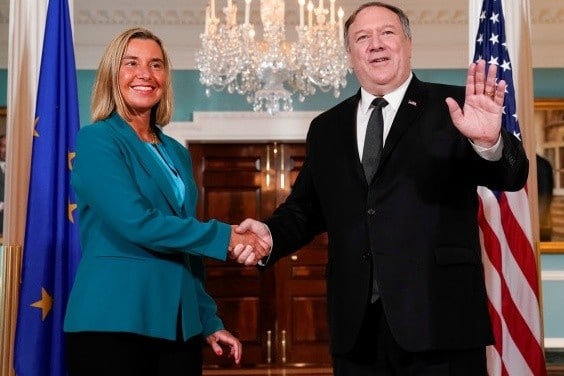 Venezuela rejects the interventionist statements of the High Representative of the European Union (EU), Federica Mogherini, for subordinating herself to the strategy of the United States Government to generate a change of government through unconstitutional ways in the Bolivarian nation.

The Ministry of Foreign Affairs of the Bolivarian Republic of Venezuela, released an official statement in rejection of this type of pronouncements. The same was published on the twitter account of Chancellor Jorge Arreaza, @jaarreaz

Below our staff translation:

The Government of the Bolivarian Republic of Venezuela rejects the statements of the High Representative of the European Union, Federica Mogherini, through which she intervenes once more in matters of the exclusive competence of Venezuela and its legitimately constituted institutions. Once again, the European External Action Service is clearly subordinated to the strategy of the Trump Administration to generate a change of government through unconstitutional means in Venezuela.

This type of interventionist statements that the European Union is accustomed to publish every time channels of political dialogue have been established in Venezuela, rather than propitiate, hinders the efforts of Venezuelans to reach sovereign agreements. The European Union, which considers itself a showcase for modern democracy in the West, loses that attribute immediately before the international community, by hiding the serious acts of political violence executed against Venezuelan democracy during the last months, which have included attempts of Coup d’Etat, like the one of last April 30. Defending the coup leaders, responsible for political crimes and those who make calls for a foreign military intervention in Venezuela, has become a constant of the European Union.

One more example of the Union’s participation in the war strategy that Washington has undertaken to seek the collapse of the Venezuelan economy is that the vast majority of funds of the Venezuelan people illegally frozen as a result of the government’s financial and commercial blockade of the United States, are precisely in banking entities within the territory of the Member States of the European Union and that their governments and institutions have done nothing so that those resources illegally retained are restored to meet the most felt social needs of the People of Venezuela.

The Bolivarian Republic of Venezuela urges the European Union to maintain a position of constructive equilibrium in accordance with its constitutive principles, as well as to respect the sovereignty and independence of Venezuela and invites its member states to dissociate themselves definitively from the perverse imperialist plans against the Venezuelan People.