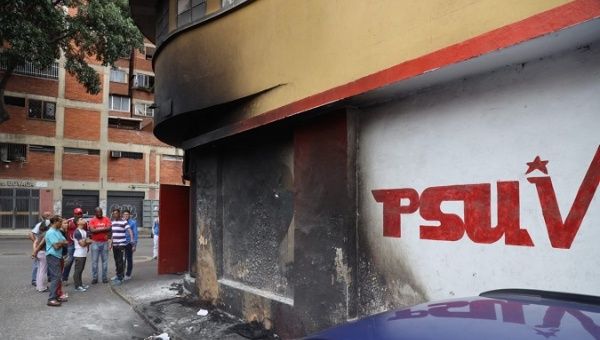 The local headquarters of the ruling United Socialist Party of Venezuela (PSUV) in San Agustin, Caracas, was the scene of arson early Saturday morning in an act of targeted violence.

“At 3:00 a.m. our apartments were filled with smoke,” resident Marbi Devia told teleSUR via phone. “We were able to put out fire with fire extinguishers and water.”

Violent opposition groups attacked overnight the local headquarters of Maduro’s United Socialist Party of Venezuela in San Augustin, Caracas. They set fire to the building. Someone was sleeping inside. This is just the latest of a number of such attacks in recent days. #Venezuela pic.twitter.com/zP1H0PX2id

Oscar Perez was a radical and violent opposition leader and investigative police officer who tried to lead a military uprising against the government in 2017. He was later killed in a raid.

“The is the latest in a string of such attacks around Caracas that have taken place against pro-Maduro organizations like this,” Fox added.

Since Tuesday when self-proclaimed interim president Juan Guaido called for a military uprising to topple President Nicolas Maduro, mass protests and violent clashes have erupted around the country and in the capital.

San Agustin is home to one of the main Afro-Venezuelan communities in Caracas and is a Chavista stronghold. At the time of writing, no one has been named as a suspect.