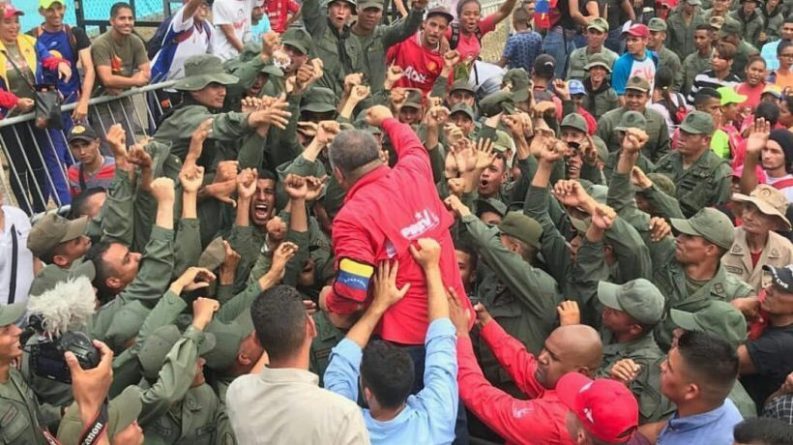 The open threats of a military intervention against Venezuela and the appointment of a “parallel government” imply the continuation of the Obama Decree and the (failed) coups of 2014 and 2017, leveraged under the method of “color revolution” or “soft coup”. A premise that is key in that an serves to draw us a background map, but also important to understand that it was Barack Obama, with all his charisma, Nobel Peace and marketing as a hero of minorities, who made the first moves to bring Mike Pompeo and John Bolton.

Each page of the famous manuals of Gene Sharp has had its application in the streets of the Venezuela, which has forced the Chavismo to mature intellectually and to improve their immune system against psychological operations, strategies of appropriation of symbols and other resources that pursue their emptying. Once again, it was not the cadre school or the academy the institutions that produced that political leap. They were the street and the experience: the same ones where we collided with Chávez, without knowing it, before the historic February 4, 1992.

In part, what keeps Chavismo standing is this distinctive feature and in permanent construction as a training space that goes beyond the classical organizations of politics: parties, unions, etc.

Perhaps because of the mixture between shame and such evident parallels that the strategy against Venezuela draws, it is easy for us to discern what they are looking for and how they are proceeding. We already know that it is a “Coup in the making”, an import of the Libyan and Syrian models, that the governments of Brazil and Colombia are plotted with Washington and that the port of arrival of this whole operation is a military intervention proposed from different fronts.

The strategy and its objectives are so evident that, even as a mental health symptom or that some common sense still remains, many political figures who had distanced themselves from Chavismo for fear of media lynching, now close ranks with the Bolivarian Revolution. Due to the very weight of reality, the timid, centrist positions and the absolute omission of the attacks that Venezuela is undergoing, were put aside to open the way to the unified criterion that the Latin American country must be defended. The list is too long to portray it to totality, and you know who they are.

At the same time this does not stop generating suspicion, it seems that from time to time the organic life of the Bolivarian Republic must be put at risk so that its historical value and geopolitical importance can be recognized again with the effervescence it has always deserved.

But the truth is that in the journey from a daily life besieged by the financial blockade to the climax point of an open threat of intervention as it is lived today, Chavismo puts to the test the features of its own construction as a political subject. And that is, in short, what must be defended for being the fundamental reason they pursue in the war against Venezuela.

A candid radiography of Chavismo tells us that, as a political force, it is not limited to only partisan organizations and, in general, civil society as we know it. For large sectors of the population implies having a proper name and a story with which to tell itself, but also expresses an exercise of self-esteem and permanent participation in the destiny of the Republic. It is not a client, a consumer, a passive citizen who makes politics from the vote only, but a historical accumulation that creates forms of organization and resistance according to their own experiences and collective teachings.

If the blows of Brazil, Honduras, Paraguay, and the defeats through legal channels in Argentina and Ecuador tell us, the difference between Chavez and the rest of the progressive cycle was in using the distribution of wealth as a means to the participation and construction of a political subject and not as a victory in itself.

From the people in the streets of Caracas in permanent defense of their conquests, to the solitude of the streets of Rio or Sao Paolo when Lula was on his way to jail, is the affirmation that Chavismo understood early that coming to power is a means to build a country and society model, not just a resource for better macroeconomic numbers.

Progressivism must defend Venezuela, but it must also feed and take it as a political guide, as a model of resistance and organization, to rethink its respective local offensives.

The Chavismo made the common people, the housewife, the head of the home, the youth of the neighborhoods, a political subject. That accumulated today defends itself with the teeth before a violent campaign of sanctions that daily violence to the population and that tries to blackmail it: you renounce yourself, your history and your name for the 20 million dollars that promises Mike Pompeo in “humanitarian aid”!

Knowing that the stability base of the Chavismo-State-society relationship was largely based on the distribution of income, the United States, the European Union and its colonial extensions in Latin America set in motion a financial blockade operation under the premise that, if the flow of money were cut, Chavismo would lose support as a historical current.

And although their affectations are sensitive, Chavismo transformed the mechanisms of containment and social assistance of the Carnet de la Patria, the bonds and the CLAP, into tools and organizational dynamics of territorial control, political formation and rearticulation of the Venezuelan proletariat. Its scope was maturing progressively and it is not unreasonable to say that it was thanks to these new organizations, built from the bosom of the people, who guaranteed the victory of Nicolás Maduro on May 20, 2018.

Today the United States and its allies use this date and its political significance as a factor of difference to put the world to choose sides over Venezuela, between recognition or support for war. And when they do, every time that Mike Pompeo, John Bolton or his stepson Marco Rubio verbalizes it, they only reaffirm that they act against the intelligence of Chavismo, his learning and his ways of resisting looking for itself. They act against that proper name.

They are right to act with despair!