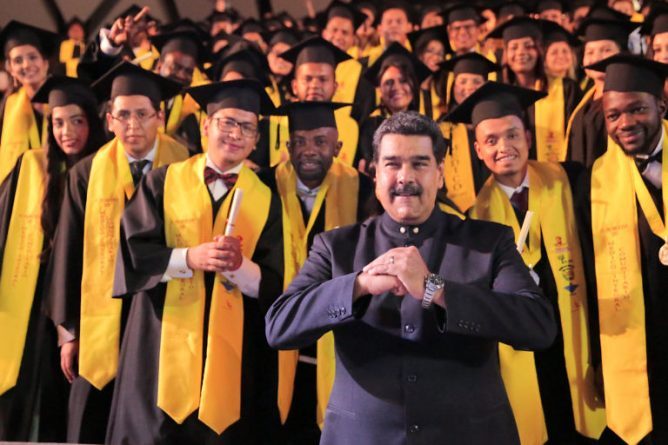 A total of 128 International students of the Latin American School of Medicine (ELAM), Salvador Allende, graduated this Tuesday, in an event led by the President of the Bolivarian Republic of Venezuela, Nicolás Maduro. “46 are graduating from Bolivia, 37 from Ecuador, 15 from El Salvador, 13 from Paraguay, 6 from Mexico, 3 from Mali, 2 from Antigua and Barbuda, 1 from Granada, 1 from Guyana, 1 from Haiti, 1 from Palestine and 2 brothers of the Warao ethnic group,” he explained.

During the ceremony, held at the Teresa Carreño Theater, Sonia Elisabeth Escalera Aguilar, an Ecuadorian student, thanked the support of the Bolivarian Revolution for the learning she obtained in the last six years. “We arrived in Venezuela at the height of the Bolivarian Revolution with that hurricane of love that was Comandante Chávez, suddenly changed the landscape and from the hands of this brave people we were witnesses for six years of the dignity led by President Maduro,” she said.

She recalled that the creation of this institution is to form people with a high human character and thereby contribute to the struggle for the salvation of the people by providing dignified help. “This planet is in danger, the human species is in danger. Let’s do all we have to do to save our species, this ELAM school is for their salvation,” she added.

She stressed that the work of the community doctor goes beyond finding academic excellence and developing great skills, but also to provide care to the needy. “We must be those professionals who never remain still before injustice, worry about the welfare of our patients, relieving their pain, curing them, but above all, preventing their illness,” she said. In her speech she thanked the governments and social movements of the sister countries, as well as the Venezuelan head of State, Nicolás Maduro, in their efforts to promote education, especially in health. “I thank the social movements and the sister countries for supporting our career. Our imperishable, active, and revolutionary work, to our President of Venezuela, Nicolás Maduro, who is a guarantee of peace in a world that rises to multipolarity, ” she said.

She also congratulated each of those present for this professionally achieved goal. “This space is timely to tell you that today is born a commitment to assume the performance of health with responsibility, careful attention and much love from the service,” she said.

During the activity, President Maduro reported that a total of 1,469 community doctors from different countries have graduated from ELAM between 2013-2019.

He instructed the Vice President of the Bolivarian Republic of Venezuela, Delcy Rodríguez, to hold a special day at the Chancellery headquarters to post the university degrees of recent graduates.