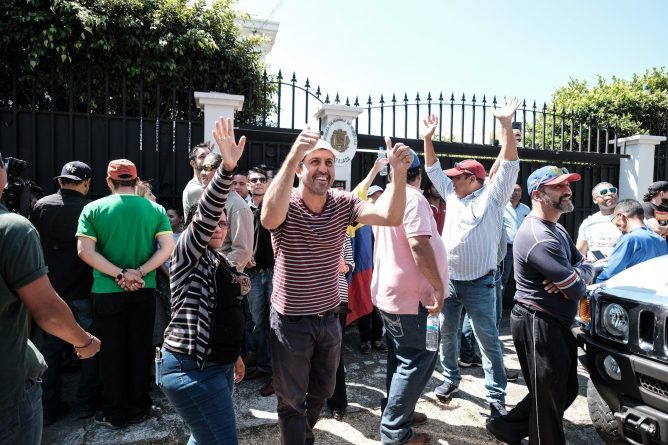 This Wednesday, the Chancellor of the Bolivarian Republic of Venezuela, Jorge Arreaza, reported that a violent group attacked the Venezuelan embassy in Costa Rica.

Through his Twitter account (@jaarreaza), the Venezuelan diplomat demanded that the Government of Costa Rica comply with the Diplomatic Relations Convention and guarantee the operation and security.

On the morning of February 20, a group of people went to the Venezuelan diplomatic compound on behalf of the self – proclaimed interim president Juan Guaidó, who is being investigated by the Attorney General for violating the Constitution of the Bolivarian Republic of Venezuela. María Faría, illegally designated by Guaidó as supposed “ambassador” of Venezuela in Costa Rica, posted on her Twitter account that “in compliance with the diplomatic functions” that were “assigned” and “recognized by the Government of Costa Rica . . .  assumed” control of the administrative headquarters of the Embassy of Venezuela in San José.”

The news portal La Tabla reported that the alleged ambassador María Alejandrina Faría Faría, is the daughter-in-law of Blanca Ibañez, concubine of former Venezuelan President Jaime Lusinchi, of the Acción Democrática party, “who co-operated with him between 1984 and 1988.” She is married to Carlos García Ibañez, owner of the CB24 news channel. She have lived in San José for the last 10 years, has the Costa Rican citizenship.

According to a note from the Costa Rican media CRHoy , “the representatives of the Venezuelan Government, who were staying at the diplomatic headquarters, located in the Los Yoses sector, in San José, capital of Costa Rica , were “dismissed from their duties. The president of the Central American country, Carlos Alvarado Quesada, recognized the Venezuelan deputy as “interim president” on January 23, the same day of his self-proclamation.

Later the Costa Rican Ministry of Foreign Affaires issued and statement qualifiying the ocupation of the Venezuelan Embassy in San Jose as unacceptable. From their perspective, not due to the illegality of recognizing Guaido as interim self-proclaimed President, but because the 60 days notice given to the legal Venezuelan diplomats to leave Costa Rica was not given.

The situation raise alarms about the legal and international implications of the unprecedented decision of certain countries in recognizing an authority (Juan Guaido) ‘that is in all respect illegal and in violation of international and national laws’ said an expert. “It also says a lot about the qualifications of the people “appointed” by Guaido to represent Venezuela and last but not least, raises questions about what the host country (in this case Costa Rica) is going to do to preserve the integrity of Venezuelan assets (embassy building and residence of the Ambassador)”, said an international expert consulted by OT referring to OT asking what is going to happen when this coup attempt fails.

“I denounce the assault on the embassy”
Before the statements of the Venezuelan Foreign Minister, Eduardo Medina Guevara, a local employee of the Venezuelan diplomatic headquarters, denounced the capture of the embassy through an audio message, “I confirm the outrage against the diplomatic mission of Costa Rica by the self-proclaimed Guaidó and his people.”

In addition, he said that the authorities of that Central American country did not provide police protection either for the diplomatic headquarters or for the residence of the ambassador, which is in front. “We will try to take care, as Costa Rican citizens, of the official residence so that it is not taken. I hold the Government of Costa Rica responsible, “he said.

What will happen?
The internationalist Luis Quintana considers this action as a ” hostile and forceful act ” that undermines the Vienna Convention, which governs diplomatic relations. “Embassies are inviolable, enjoy immunity,” says the specialist, referring to international treaties and Venezuelan laws.

Quintana considers that the Costa Rican State, in a passive way, allowed people from outside the country to enter the embassy “with the intention of usurping the functions of legitimate Venezuelan diplomats”.

In addition, he explains that the Venezuelan government is responsible for publicly protesting, protecting the integrity of Venezuelan officials, ensuring that the ambassador’s residence is not occupied and calling for respect for international law.

According to Quintana, this unprecedented situation could occur in other countries. “What the government of Costa Rica possibly does, according to its position, is to expel the Venezuelan officials who were fulfilling their diplomatic functions on behalf of the Bolivarian Government,” he adds.

It is important to note that the Venezuelan Supreme Court of Justice in recent days has indicated that all those acts that the National Assembly carries out will be null and void, in accordance with what was established in 2016 when the body was declared in contempt.