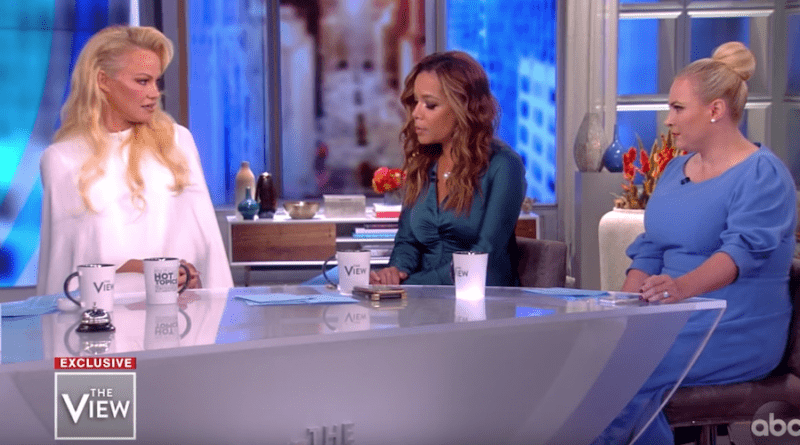 “Pamela Anderson talking about how war crimes need to be punished and of course Meghan McCain is crying about it.”

Friday’s edition of The View became the site of an argument about war crimes, the U.S. military, and WikiLeaks as actress Pamela Anderson and program co-host Meghan McCain battled during Anderson’s appearance on the hit daytime talk show.

The dispute began when View hosts attacked Anderson for her unwavering support of Julian Assange, the founder of WikiLeaks. McCain pounced, claiming that Assange is merely a “cyber terrorist.”

“He hacked information,” McCain said. “His leaks included classified documents that put our national security at risk, our military, and the lives of spies and diplomats at risk.”

RELATED CONTENT: Media Freedoms Will be Lost if we Don’t Fight US Extradition of Julian Assange

Anderson replied by pointing out that the U.S. military, not WikiLeaks, is responsible for the deaths of many innocent people around the world.

“How many people have the American government killed innocently and how many has Wikileaks?” Anderson asked. “The military has put many innocent lives at risk.”

That response spurred a cheer from the audience.

“Oh, calm down, sir,” McCain snapped at one boisterous supporter.

Later in the discussion, McCain extolled the virtues of American spies and intelligence officers and asked if Anderson was concerned for their safety from Assange leaking information to the public.

“Well, there’s no evidence he’s put anyone at risk,” said Anderson. “And I think people like Edward Snowden, Chelsea Manning are heroes.”

“What a breath of fresh air!!” Splinter managing editor Katherine Kreuger wrote in her recap of the argument.

“Pamela Anderson talking about how war crimes need to be punished and of course Meghan McCain is crying about it,” said Twitter user @Millerheighlife.

In a rare omission, Meghan McCain did not mention that her father was late war hawk Sen. John McCain (R-Ariz.) during the discussion.