The alliance known as the Historic Pact (PH, or Pacto Historico) —a coalition of political forces, each with its own political and organic autonomy and independence— was formed for the purpose of winning the elections in order to defend the six following principles of their program:

At first, the PH was made up of seven parties: Humane Colombia, the Patriotic Union-Communist Party, Alternative Democratic Pole, the Alternative Indigenous and Social Movement (MAIS), the Workers Party of Colombia, Democratic Unity, and We Are All Colombia. The alliance’s first participation in legislative elections occurred on March 13, 2022.

The establishment of the National Congress is a key step that this alliance, which just found itself at the helm of the Colombian government, will have to take in order to deliver on its promises and guide the country towards addressing the problems which social movements in Colombia have been trying to solve for many years.

For the first time, since the formation of the new congress on the July 19, 16 victims of the armed conflict in Colombia are occupying six seats in the Chamber of Representatives, which have eight-year terms. These seats do not include the posts designated in both chambers for members of the Commons (Comunes) party, which is stipulated by the peace agreement and will expire in 2026.

The alliances for a national agreement
Once the results of the legislative elections were released, a number of dialogue sessions between the Historic Pact and other movements and political parties took place in order obtain more support for the alliance and thus be able to form a majority in Congress. The party led by the recently elected president, Gustavo Petro, obtained 20 seats in the Senate and 28 in the Chamber of Representatives, failing to obtain a majority. As a result of the negotiations, it now has the support of 64 of the 108 senators (59%) and 106 of the 188 representatives in the Chamber (56%).

The U Party recently joined the PH alliance, bringing with it 27 congresspeople (10 senators and 17 representatives), despite the fact that it is widely known that this party was founded to aid with the reelection of former President Álvaro Uribe in 2005. Furthermore, it is common knowledge that the U Party supported the peace agreement promoted by former President Santos, and that in 2018 they lent their support to Iván Duque.

The alliance also managed to win over the support of both the Conservative Party, adding another 15 senators and 27 representatives in the Chamber, as well as the Radical Change party, bringing with it 11 and 18 senators and representatives, respectively. Despite the fact that the recently elected vice president, Francia Márquez, once called former President César Gaviria a “neoliberal,” the Colombian Liberal Party, which Gaviria represented, has also joined the PH bloc, adding another 14 senators and 33 representatives. The centrist Green Alliance, with 8 senators and 12 members of the Chamber, also followed suit.
Furthermore, the Independent Social Alliance (ASI), Commons, and other Indigenous and Afro-centered parties brought with them another 11 seats in the Senate and 7 in the Chamber of Representatives, while the Citizen’s Force and People in Movement party added another 2 senators, and 9 of the 16 representatives stipulated by the peace agreements.

In the meantime, the party of the outgoing government, Democratic Center (CD), founded by Uribe, obtained 13 and 16 senators and representatives, respectively. They have declared their opposition to “government policies that raise taxes” and have claimed they will defend the agricultural sector from expropriation and confiscatory taxation.

The former presidential candidate and business magnate Rodolfo Hernández, defeated by Petro, has stated via social media that “he is committed to the opposition.” In a meeting with the recently elected president of Congress, Roy Barreras, Hernández spoke of the creation of a new commission dedicated to promoting anti-corruption measures which, according to Barreras, will be presided over by Hernández, who is being investigated for corruption.

Starting off with an agenda of reforms
One of the first initiatives announced by the new congress is that of reforming the legislative branch itself. The PH bloc will try to lower the salary of congresspeople, reduce vacation time, widen the list of causes for which a congressperson may be dismissed from their post, and limit the term of congresspeople to three legislative periods. In the past, 13 attempts which sought to lower the wages of congresspeople have failed to be passed, not to mention the 4 unsuccessful attempts to modify their vacation time and the other 5 which were drafted to penalize absenteeism.

The congresspeople promoting these reforms are still discussing how much salaries should be lowered and when the project should be presented. The salary of a congressperson is currently $7,800 a month, more than 30 times the minimum salary in Colombia.

Before taking office, Senator Humberto de la Calle, a former commissioner of the Peace Accords, declared that the Colombian congress would be “progressive” due to the reforms promoted by the Petro administration in areas such as taxation, agriculture, politics, and many others. De la Calle and Daniel Carvalho, chosen by the Green Oxygen party, have announced that they will maintain an independent position with respect to the elected government of Gustavo Petro, specifying that they will support him on some legislative issues after the expulsion of his party for disagreements with the party founder, Ingrid Betancourt.

This past Monday, July 25, the Commons party, formerly known as FARC, pushed for several legislative projects to “promote peace agreements and to protect fundamental rights.” These proposals range from political and electoral reform to enable the construction of stable and long-lasting peace, to the differential legal treatment of small farmers who are, or were at some time, growing illegal crops. 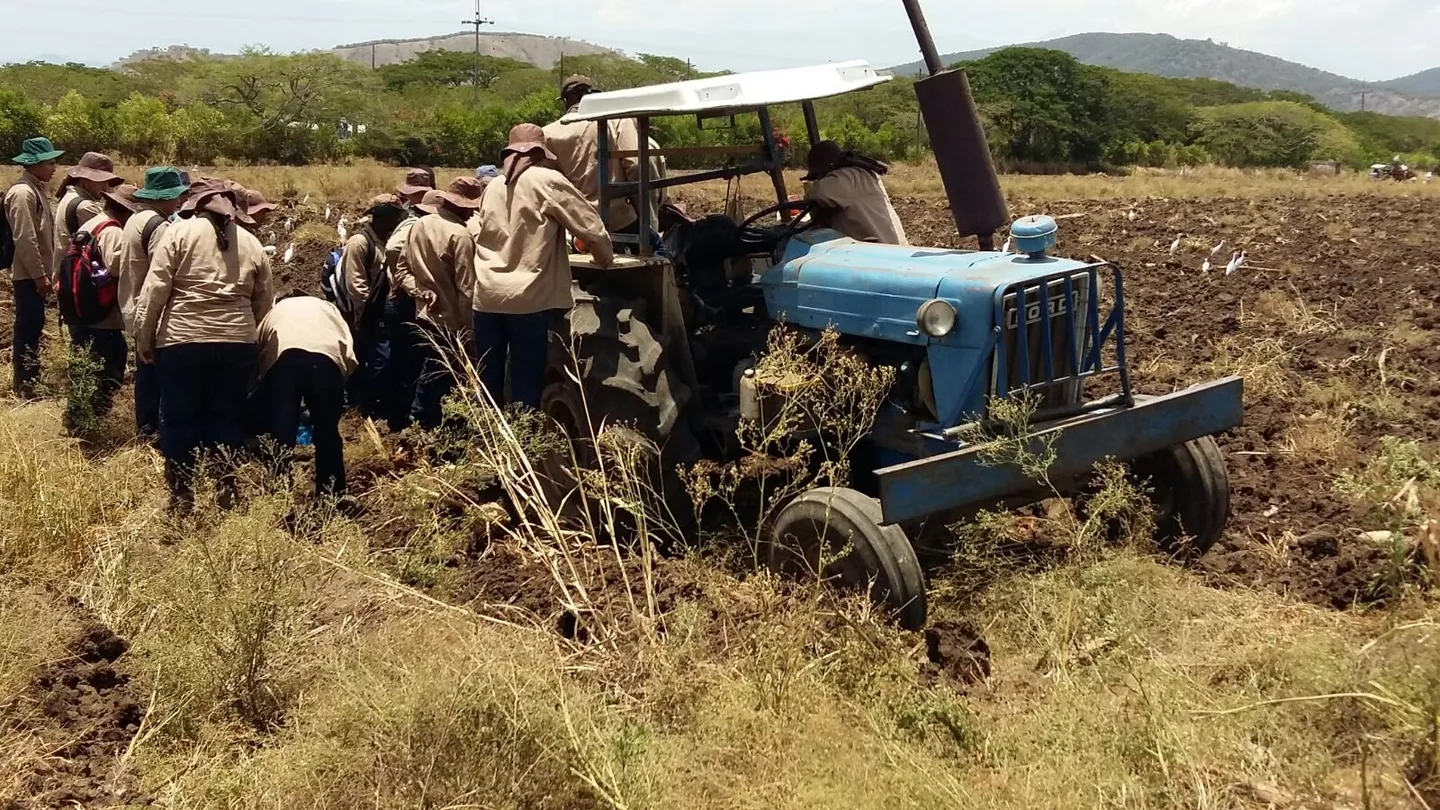 Youth who have been reinserted into the labor force after forming part of the FARC, the ELN, and the AUC are being trained to be fruit growing technicians in the Valle del Cauca through a government-supported plan in conjunction with private companies and organizations from abroad (photo: Pixabay).

Similarly, these proposals attempt to work towards reforms, together with farm workers, in the fields of politics, electoral law, electoral oversight, differential penal treatment, guarantees of the right to protest, agrarian jurisdiction, and national parks. During a press conference, they evoked the 333 signatories of the Peace Accords who were later murdered as evidence of the lack of humanitarian guarantees in the country, and doubled down on their intention of solving the humanitarian crisis affecting farm workers, former guerrilla fighters, indigenous communities, afro-descendant peoples, and urban areas during the Iván Duque government, which ignored these social problems.

Another item on the agenda, passed on Tuesday, July 26, is the ratification by Congress of the Escazú Agreement, signed by the Colombian state. It was very difficult to push this agreement forward, due to the doubts and objections of various factions, such as the Democratic Center and Conservative Party congresspersons, as well as other sectors, with regards to its possible effects on development projects in Colombia.

The agreement is designed to fight against inequality and discrimination while guaranteeing the rights of everyone to a healthy environment and to sustainable development, with special attention paid to ethnic groups and civil society. Three key aspects are emphasized in the struggle for these goals: access to public information, the participation of citizens in decisions which pertain to them, and environmental justice.

In response, CD Senator María Fernanda Cabal, herself the object of many scandals, retorted that “just like they did in Chile, in Colombia, Petro will pass the Escazú Agreement, which will put an end to judicial sovereignty and juridic order. The 2030 agenda is starting to be implemented, it destroys everything, under the disguise of just causes.”

The key to stage managing this government
When there were still doubts about whether or not the economist [Petro] could govern as the first leftist president, when his links to guerrilla organizations, the distrust in the barracks, the market, the press, and the balance in Congress, all seemed like bad omens, certain recent developments in Colombian politics are indicative of something else.

Petro’s popularity is on the rise, his approval rating rose to 64% after the July 19 elections, the highest of a Colombian head of state since 2005; more than Uribe, with his landmark wins in 2002 and 2006, and almost the same as Juan Manuel Santos in 2010. Petro has kept his two allies, the congressmen Roy Barreras and David Rocero, as presidents of the Senate and Chamber of Representatives, respectively.

In spite of this, the tension has disappeared: during the taking of office of the new congress this past July 20, the senators and representatives brought signs with them displaying their demands during the next four years, and which were also directed at the outgoing government. The Historic Pact thus recalled all of the social leaders and murdered former combatants, while the Uribismo factions, the only opposition party, showed images of dead members of the public armed forces and posters with the message “two visions, one country,” alongside with images of the destruction which resulted from last year’s protests. 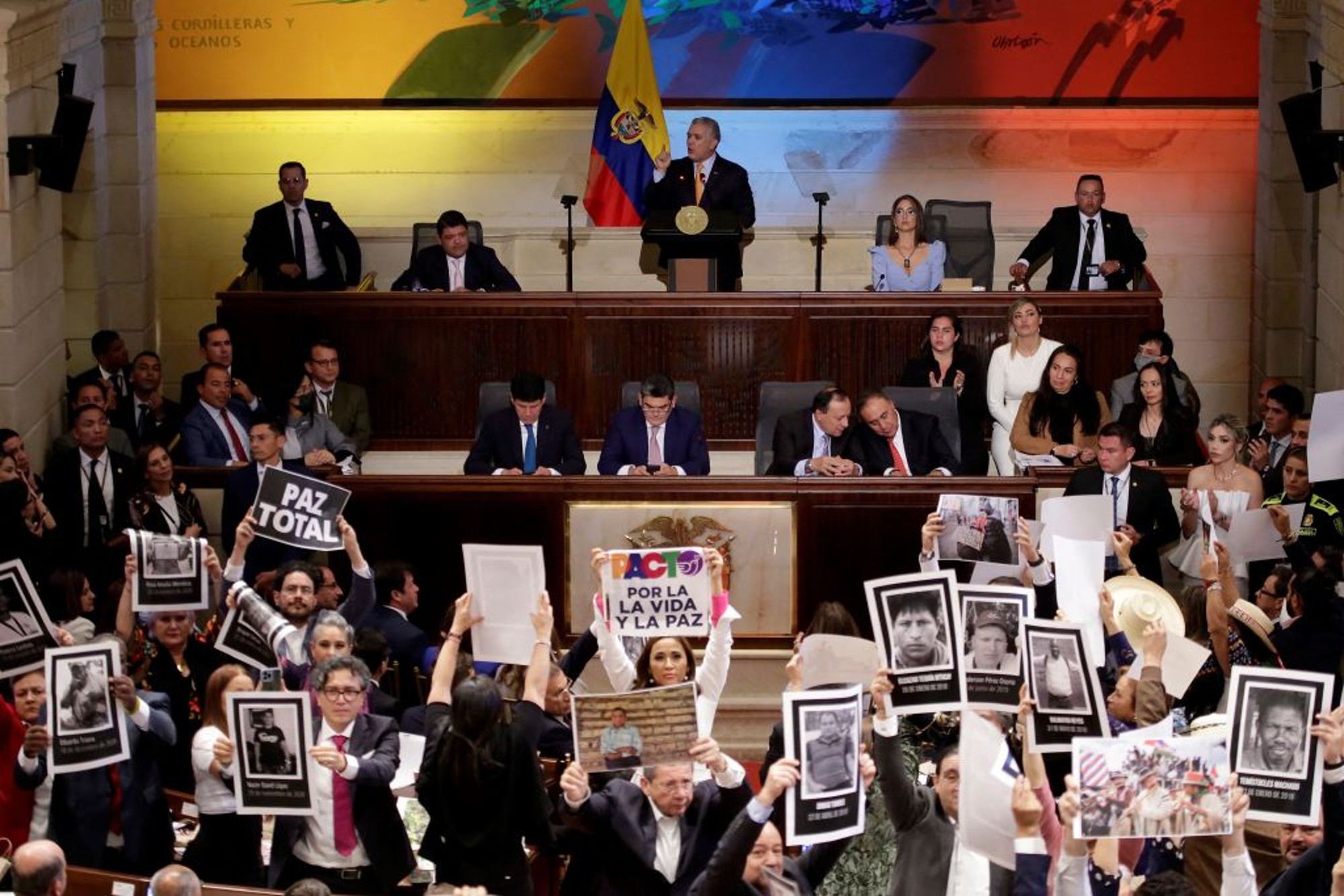 Outgoing President Iván Duque was booed by the opposition, which also showed posters with the faces of murdered social leaders, while Duque gave the welcoming speech to a Congress whose majority were opposed to his government (Foto: Juan Pablo Pino/AFP).

All in all, there are indicators that point to the possibility of Petro managing to maintain a stable government during the next four years. He has made symbolic and meticulously announced appointments to ministries and embassies, some of which are:

With these measures, Petro is trying to reactivate the peace process, which was partially put on the back burner by Iván Duque, and to moderate his image as a leftist. In this regard, some of his appointments have cast doubt on the authenticity of the promises made by the Historic Pact.

Relations with the US are another key factor that will determine the future of this government. On the 23 of July, Petro, Murillo and Leyva met, in Colombia, with officials from the Biden Administration to review the free trade agreement and other issues such as peace, migration and climate change.

The way in which the political panorama has unfolded before Petro foreshadows a period of stability for his government, yet the future of his project will also be determined by the economic conditions left by the current government. The opening of the so called “Petro coalition” to a wide spectrum of political, social, academic, and intelectual “forces” has made the country more confident in him and has smoothed over the negative perceptions which surrounded his political image.

The rolling out of a Great National Agreement has helped these distinct perspectives, which could easily have fallen into the role of the opposition, to integrate themselves into this diverse coalition without fusing them into a homogeneous mass, while still maintaining common goals. The words of Jorge Eliécer Gaitán, spoken in 1946, are more relevant than ever:

“In Colombia there are two sides of the country: a political side and a national one. The political one thinks about its employees, its mechanics and its power, the national side things about work, health, and culture, things that are neglected by the political side. These two sides have different paths. What a drama in the history of a people!”

The Historic Pact is calling for a peace obtained through the collective will of the people and the renovation of the system at a moment when the current model and the political class are exhausted. The PH has put all of its chips on reaching a consensus in order to address these issues, but it will be anything but easy in Colombia.