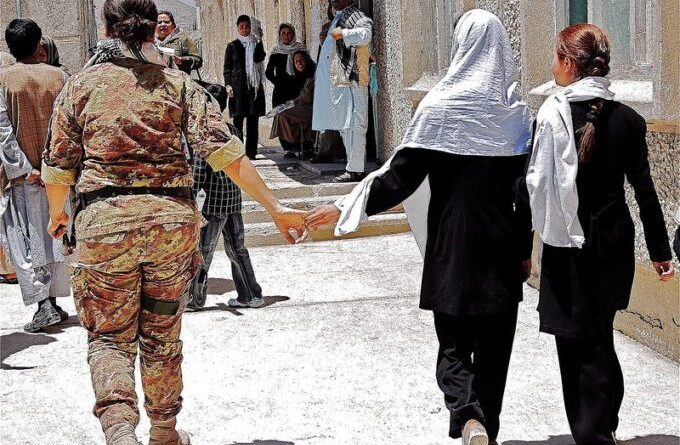 So the usual “experts” are out and about on airwaves, in newsprint and social media, offering their punditry regarding the situation unfolding in Afghanistan even as the US-backed government crumpled like a house of cards with the advance of the Taliban, once the US troops started their announced pullback in earnest after 20 years of occupation a few weeks ago.  The shock-and-awe tactics of the Bush doctrine that dragged the world into a post 9/11 horror picture show euphemistically known as the War on Terror (in truth, it was intended– and has been experienced by its globally-dispersed victims, as a war OF terror)—seemed appropriately reverse-engineered as the world was treated to images of ordinary Afghans, a 17 year old aspiring soccer star amongst them—plunging to spectacularly shocking deaths as they fell from the tail of a US Air Force plane they had clung to as it took off, carrying a few hundred of their “luckier” countryfolk to the putative “safety” of the West.

Whilst I refuse to wear the mantle of expertise here— well cognizant —as Rafia Zakaria has put it well in a recent book[1]–of how, in the West,  “the emphasis on expertise becomes a kind of gatekeeping of power that locks out [certain, though not all] people of color, as well as working-class people, migrants” and others (p. 8), I remain equally skeptical of the ways in which the category of “experience” (too often a stand-in for “third world/global south authenticity”)–is mobilized as a counter to expertise. I am not convinced (as Zakariya seems to argue) that claiming your “voice”—in the case of brown and black women for example, even when that process of “voicing” genuinely seeks to interrupt the hegemony of white feminism and its epistemological influence on our world—necessarily and always proffers a more transparent working through, and hence redistribution of, power politics. For this latter progressive political vision to take hold, one needs a clearer understanding of what’s at stake, of who or what the levers of control and domination are, and a willingness to embrace the politics of affiliation over the tribal politics of identity. Only then might a blueprint evolve for challenging structural barriers to a better and more equal world.

The case at hand that prevents me from an unqualified rooting for the category of “experience,” is the exemplary case of Malala Yousafzai of Pakistan, who has traversed the distance from female “experience” to feminist “expertise”, and who, like others before (and since) that have made that journey from the “margins” to the “center” of imperial power, has now switched from being a “voice of the oppressed” to becoming an “expert” who can speak to us and teach us about those authentic “other” women in the global south—in this case, Afghan women– to whom her prior proximity (“experience”)– renders her an “expert” on today. From experience to expertise then, is a pretty straightforward line, following the predictable path forged also by white feminism in thrall and service to imperial designs past and present. This is the path that was announced with great fanfare shortly after 9/11 by First Lady Laura Bush and enthusiastically supported by the Feminist Majority Foundation, that would “save brown women from brown men” by going in to the “backward” country of Afghanistan overrun by crazy “Moslem” men, in the process unleashing a 20-year war on the population that had had nothing to do with 9/11. The initial military intervention was then followed up over the next two decades with countless “development” schemes that enriched a few at the expense of the many, and when the cost of this unending war became unpopular with the citizenry “back home” in the USA over time—we left the hapless “natives” that included those very women we had been so concerned with “saving,” at the mercy of anarchy and chaos.

It is against this backdrop of “expertise” (represented back then by policy feminists such as those at the helm of the Feminist Majority Foundation who supported the war in Afghanistan ostensibly to “save” those poor brown Muslim women from the Taliban)–that the “voice” of Malala Yousafzai of Pakistan who was shot at by the Pakistani branch of the Taliban for wanting to attend school—needs to be understood and assessed when she speaks today in the aftermath of that war. Obviously, the spill-over effects of the 20-year war into neighboring Pakistan negatively affected Malala herself (she almost died because of the Taliban attack upon her), but those same circumstances also helped her ascend to worldwide fame, leading her to being read/seen as the “voice of experience” (by western feminists and policy makers), whose “voice” could then be mobilized in service of several of the goals of the continuing War on Terror.  Because she was “rescued” by the British govt after being shot, one could say she crossed over into the realm of “expertise”—a brown Muslim woman today ostensibly speaking for/on behalf of the Afghan women facing another reign of terror with the Taliban, when she tells her readers (without a hint of irony) in the NYT op-ed essay entitled “I Fear for My Afghan Sisters,” (NYT Aug 22, p 5),  that she “cannot help but be grateful for my life now.”

Please don’t misunderstand me: I am not saying anyone should begrudge this brave young woman a second chance at life, for brave she was in defying the Taliban fanatics who would then (and now we presume)—deny women and girls a chance at education and autonomy in leading their lives. What does, however, bear scrutiny is the degree to which the “escape” route permitted to young brown women like Malala can ever enact a politics of feminist solidarity that bypasses the kind of “empowerment” feminism that remains allied to white liberal imperialist formations; that is, can brown women whose experience allows them a leg up into the realm of expertise usually reserved for white women, ever translate into a feminism for the 99%? Or is their “experience” simply another nail to hammer into our heads the state-sponsored feminism celebrating the individualist ethos of success, of “empowerment” which is aimed at further advancing the interests of the top 1%? Do these “voices of the (formerly) oppressed” now just become fodder for advancing the same old stories about breaking glass ceilings and joining old (white) boy networks in the pursuit of “equality”? Thus, when Malala says

After graduating from college last year and starting to carve out my own career path I cannot imagine losing it all—going back to a life defined for me by men with guns.

one has to shake one’s head with a different type of desperation. Whereas her Afghan “sisters” have indeed much to fear at the hands of gun-toting Taliban leaders if the past is any indication, Malala seems to have entirely missed the irony that her “freedom” is now in the hands of another set of gun-toting men: white imperialist invaders/drone attackers of lands like Afghanistan, Pakistan, Iraq, Syria and so on. Further, her “cure” for the world’s women is to give them access to education in order to enable them—like herself—to lead independent lives whose definition of “freedom” and “success” is measured in carving out individuated “career paths.” Malala Yousafzai, in this instance, becomes the avatar of all those “It” girls of consumer-oriented white western feminism, that Angela Mcrobbie has written about in her  book on the Aftermath of Feminism, in which she theorizes the loss of feminist subjectivity in Britain, a feminist sensibility arising out of a socialist ideology that could have served as the basis of solidarity across race, class and cultures, but which, as one reviewer points out is  “now entrenched in a post-feminist neo-liberal capitalist global economy.” Unfortunately, Malala’s “voice”– her “experiential” advantage– has been turned into its opposite in this capitalist neocolonial economic model that extracts what is of use to it and puts it to a different purpose to serve its own agendas. In short—she is now serving at the behest of her “handlers”—the white feminists who once again are poised to “save brown women from brown men.” [2]

[2] I have elsewhere argued that the “Malala effect” enables a “politics of pity.” By this I mean– as Wendy Hesford in Spectacular Rhetorics has explained about the role of the kind of rhetoric celebrating Malala’s spectacular “escape” from the clutches of the Taliban in 2012– that this type of “recognition”  “activates certain cultural and national narratives and social and political relations” that producedifferential power relations. Such a “recognition of the pitiable/different other” then leads to an argument for the governance of those visibilized through such rhetorical codes as“human rights subjects,” who need “our” help. “Spectacular rhetorics” as theorized by Wendy Hesford (as well as Lillie Chouliarki), thus produces and circulates images of “suffering others” (in this case, Afghan women as victims)—leading western audiences of these images to feel “pity” for these victimized women and hence to allying with the “white savior/rescue” narrative.

Fawzia Afzal-Khan is University Distinguished Scholar at Montclair State University in NJ. Her latest book is Siren Song:Understanding Pakistan Though it’s Women Singers. She can be reached at:  fak0912@yahoo.com