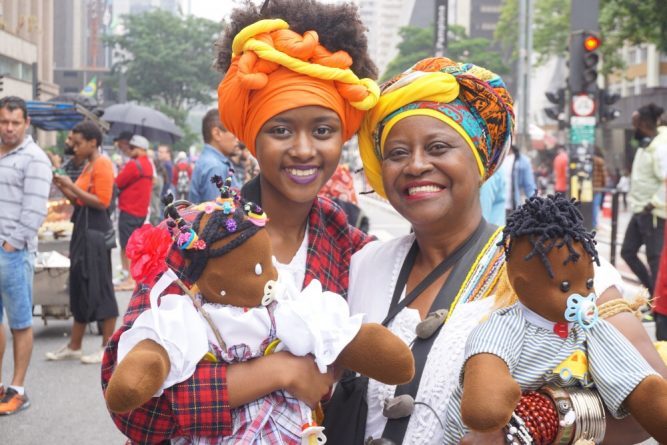 For Afro-Brazilians, November is a month to reflect on how their ancestors survived 350 years of slavery and to devise ongoing strategies for resistance. Commonly known as Mês de Consciência Negra, Black Consciousness Month, or November Negro, Black November, this month-long celebration has culminated in the Black Consciousness Day March on November 20 for the last 15 years. Afro-Brazilians in São Paulo have marched through the busiest areas of the city in defense of democracy and against fascism and racism.

This year’s march, marking the 130th anniversary of the end of slavery in Brazil, took on special significance as it took place exactly three weeks after the country elected Jair Bolsonaroa president, someone who many think will exacerbate racism and violence against Afro-Brazilians. In the months leading up to Bolsonaro’s election, he called Black people lazy, said he would decrease affirmative action policies for Blacks and claimed that the Portuguese never enslaved Africans. Bolsonaro’s recent win was certainly on the minds of the march participants, who on the overcast, rainy day, focused publicly on two recent emblematic losses of their own.

“It can rain and soak us, but the Black struggle fights on,” yelled the marchers as they walked through the streets of São Paulo. The march was dedicated Marielle Franco and Master Moa do Katendê—two fearless activists who dedicated their lives to the uplifting the Afro-Brazilian community. Marielle Franco was a rising political star in Rio de Janeiro when she was assassinated on March 14 of this year. She worked tirelessly to improve social conditions in Black communities focusing on youth, women, LGBTQ and the poor. Mestre Moa do Katendê was a capoeira legend (an Afro-Brazilian martial art that combines elements of dance, acrobatics, and music) in Salvador who traveled the world teaching as an ambassador of Afro-Brazilian culture. He was reportedly stabbed to death by a pro-Bolsonaro fanatic on election night. “As a black man who is conscious of my heritage and the legacy of Black people, I didn’t vote for Bolsonaro,” said Durval Arantes, a writer who manages one of Brazil’s largest online communities in the Black Movement—Intelectualidades Afro-Brasileiras. “This guy has been a step back in the advancement of Black people. But we are here to resist. We represent the people who came here on slave ships.

In Brazil, the simple expression of Afro-Brazilian culture by Black Brazilians is a protest against white supremacy. So before and during the march, Afro-Bloco drum groups provided rhythms that moved people to dance. Capoeira groups and the famed Vai Vai samba school paraded through the crowd with drummers, flag bearers and Baianas—Black women elders who protect Black heritage.

The roots of Black Consciousness day go all the way back to the 17th century, when Zumbi dos Palmares, a leader of a Black Quilombo (Maroon Palenque), died defending his community from Portuguese invaders on November 20, 1695. The Palmares Quilombo, located in current-day Alagoas, Brazil, was a self-sustaining community composed of tens of thousands of escaped slaves from nearby plantations. This community thrived for more than 100 years. Zumbi, the last king of Palmares, led the warriors who defeated numerous invasions until the Portuguese ultimately destroyed the community. Zumbi’s capture and death are reported as November 20 in 1695. Today the word “quilombo” has great meaning for Afro-Brazilians; it not only refers to a self-sustaining community of formerly enslaved Afro-Brazilians but it also carries the symbolism of “resistance” and “survival.”

“The spirit of Zumbi lives on,” said Deise Nascimento, who carried a large image of Zumbi along the 2.5 mile march. “He’s our first concrete image of the resistance to slavery in Brazil.” A group of modern-day quilombos (maroon communities) in Rio Grande do Sul decided in the 70s that November 20 should be the Dia de Consciencia Negra—Black Consciousness Day. On the 300th anniversary of Zumbi’s death in 1995, more than 30,000 members of Brazil’s Black movement marched in Brasília to demand improved conditions for Blacks in the country. While Black Consciousness Day is a not a federal holiday, it remains an official holiday in five states and over 1,000 cities.

Sixteen-year-old Ynaê dos Santo has attended every Black Consciousness Day Parade in São Paulo. She was just one-year-old when her grandmother brought her to her first parade. These days, dressed traditionally in headwraps and long skirts, she and her grandmother are seen at the annual event carrying the beautiful Black dolls her grandmother makes and sells.

“Since I was small my grandmother has always told me that we have to be proud of our race,” dos Santos said. “So we come here to see our friends and show our pride.”

As the march made its way to the Municipal Theatre of São Paulo, more than 30 activists and politicians spoke to the crowd from a moving sound system. Organizers saved the best for last. On October 7, Erica Malunguinho was elected to the state congress in São Paulo, thereby becoming the first transgender woman to hold a statewide political position in Brazil. As she marched with the crowd, Malunguinho, dressed in a flowing white gown, received hugs and congratulations. Fittingly, November 20 is also her birthday. “No more dead Black people,” Malinguinhos said from atop the car. “A living Black person is the greatest act of resistance in this world. This is for Marielle, Luana Barbosa, Claudia Ferreira, Amarildo, Mestre Moa de Katendé. This is for all of our brothers and sisters who were killed by this patriarchal white supremacist system.”

At the end of the route, marchers gathered on the steps of the Municipal Theatre, where São Paulo’s modern-day Black movement was founded 40 years ago.