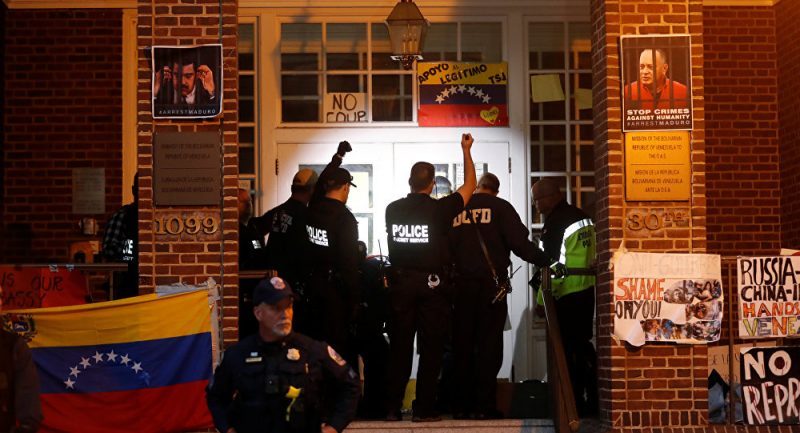 International News
May 13, 2019May 14, 2019 orinocotribune Defending the Embassy in DC, Embassy, US Imperialism, us regime in violation of law

Anti-war activists living in the Venezuelan embassy in Washington, D.C. are under siege by a right-wing mob supported by the Secret Service and other police agencies. Watch the new video below about their historic struggle and show your support on Saturday, May 18 at the national demonstration.

Before finishing this editorial, social networks began to viralized videos of an imminent eviction of the Collective Defending the Venezuelan Embassy in DC. Under all legal analysis this action is ilegal. Disregarding the US regime position on Guaido, the United Nations only recognizes the legitimate government of Nicolas Maduro in Venezuela and in that respect they have to comply with the Vienna Convention stating that the host government (the US in this case) should protect diplomatic buildings even in cases of warring countries.

BREAKING: US Marshalls about to illegally seize Embassy of Venezuela and hand over to US-backed ambassadors of Guaido in violation of international law #EmbassyProtectionCollective members may be arrested https://t.co/z0NlwOvIsJ

“The Venezuelan government will have the legitimate right to procede in the same way against the US Embassy in Caracas in the case our diplomatic building in Washington DC is unlawfully occupy”, a diplomatic expert said to OT.

This is a video prepared by the collective a few hours ago, knowing about the possibility of being unlawfully evicted:

A final message from the Venezuelan Embassy Protection Collective as police prepare to unlawfully raid the building pic.twitter.com/CL1qLVARlg

The crime has been consummated, US “law enforcement” have evicted the Collective in Defense of the Embassy”, here a video of the exiting of some activists:

In one final act of resistance, reporter @anyaparampil carries a portrait of Simón Bolivar over her face while being forced to exit Venezuela’s embassy.
She shouts “Bolivar y Chavez Vive!” in the face of @carlosvecchio‘s staffer before police threaten to arrest her for stealing. pic.twitter.com/jbb2KIie8o

Besides some members of the Collective already outside the Embassy, some activists remain in the building according to a post on twitter from Morgan Artyukhina @LavenderNRed

Glad to see the collective remains for the moment! Defiant to the last! #EmbassyProtectionCollective pic.twitter.com/iPpsEfxFZc

A twitter post by @MaxBlumenthal, 27 minutes ago provided more clarity about the situation on the Venezuelan Embassy in DC. Four members of the collective are still in the building and “law enforcement” have left the premises. In parallel “law enforcement” is dismantling the anti-chavista tent in front of the embassy acording to a post by Morgan Artyukhina.

So there was no raid yet on the Venezuelan embassy. Photos here shows Secret Service leaving with 4 protectors still inside.

This makes me wonder if there will be a protecting power agreement w/VZLA & an ally state, which would be a titanic defeat for Guaido’s forces. #CoupFail pic.twitter.com/fVTyn2zaUg

A beautiful sight. Cops are forcing the opposition to dismantle their entire encampment in front of the embassy! #ColectivosPorLaPaz #HandsOffVenezuela pic.twitter.com/tjBfYnuLt0

Here a detailed explanation about what happened by Alex Rubinstein @RealAlexRubi:

Police came and may have entered the building in violation of international law. But they left, putting zip tie handcuffs over the main entrance. They left with their tails between their legs. The police raid has failed just as the coup did. Embassy protectors are STILL inside