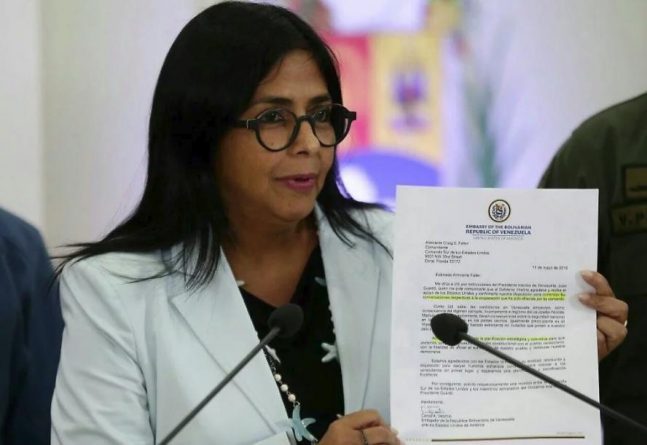 In a press conference from the Vice Presidency, Rodriguez spoke on Monday about the letter sent to the Southern Command of the United States by Carlos Vecchio, who claims to be “ambassador” from Venezuela appointed by deputy Juan Guaidó, requesting a meeting with that military to “advance technical and operational planning” of the possible entry of US troops into Venezuela. “We reject the hatred of one of the coup leaders who is calling for military intervention in Venezuela on behalf of a group of coup-makers, who execute terrorist actions to generate anxiety,” the Venezuelan vice-president responded.

Rodriguez denounced these objectives, as “one of the objectives that Trump’s government has set is to affect the oil industry and impose a shipping blockade.”

“That they invade Venezuela militarily will not happen. Neither will the division of the monolithic unity of the FANB, “said Rodríguez. “All those plans to affect Venezuela , not only do we condemn it but we know they are destined to fail, ” stressed the vice president.

In this sense, Rodriguez stressed that the Venezuelan opposition “refuses to seek a democratic way to win the love of the people. They pretend to impose themselves by violence.”

Juan Guaidó, who on January 23, proclaimed himself the supposed “president in charge” of Venezuela without major repercussions on the day-to-day life of the country, instructed Carlos Vecchio, a person designated by him as supposed “ambassador” of Venezuela to the United States, to meet with the Southern Command.

This happened after its commander, Craig Faller, wrote on the social network Twitter on May 9: “When Guaidó and the legitimate government of Venezuela invite me, I will be ready to talk about our support to those leaders of the FANB (Armed Forces Bolivarian National) that take the right decision, respect the Venezuelans first and restore the constitutional order. We are ready,” he said in an obvious call to the Venezuelan Armed Forces to disobey their Commander in Chief and the rule of law in Venezuela.

Subsequently, Guaidó instructed Vecchio to meet with the aforementioned US military unit. This Monday, Vecchio formally requested a meeting with the Southern Command. “Following instructions from Pdte. (e) @jguaido, I officially requested the South Command @Southcom meeting with a technical delegation to advance strategic and operational planning with the priority goal of stopping our people’s suffering and restoring democracy,” he wrote on the social network placing screen captures of the letter.

In the letter, Vecchio confirms his intentions to “begin the respective talks to the cooperation that has been offered by his command” and denounces the alleged presence of “foreign forces not invited” in the country.

The Southern Command is one of the 10 unified combat commands into which the Department of Defense of the United States is divided. Of the ten commands, six are geographical divisions by regions of the planet (Africa, Europe, North America, South America, the Middle East and Indo-Pacific) and four are functional divisions (CyberCOM, Strategic, Transport and Special Operations). The Southern Command, in this case, is in charge of conducting military operations in Central America and the Caribbean.

In this regard, Delcy Rodriguez also recalled: “The entire country is joined into a single line to strengthen Venezuela, the production of food for our people is how we defeat the imperial blockade,” said Rodriguez.

Electric theme
The vice president touched the issue of electricity in the country and said that “a month after the installation of the Electric Power Command, we see very important progress. An [electric] load management plan is running. ”

“We still have a territorial sector affected, but we are working tirelessly so that in Zulia we can overcome this situation, ” said Rodriguez.

Regarding the topic of rains, she said: ” The rainy season is strong. There is already a coordinated effort for the cleaning of streams and prevention plans. ”