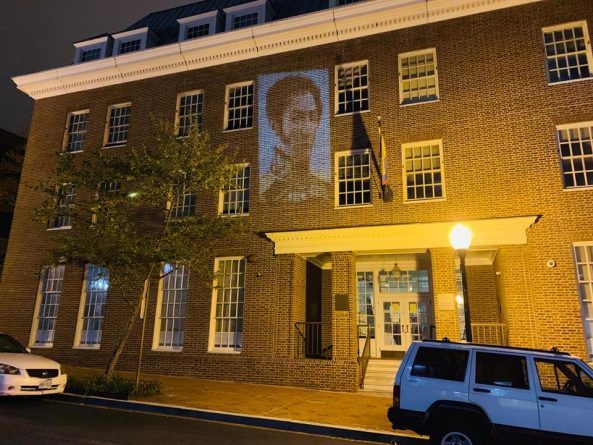 Embassy Protection Collective Will Refuse To Turn Over Embassy To US Puppet Government:

DON’T LET THEM REPEAT WHAT THEY DID WITH ASSANGE AGAIN

The next two days will be crucial for the protection of the Venezuelan embassy in Washington, DC. The Embassy Protection Collective is prepared to stay at the embassy for the foreseeable future, for as long as it takes to protect the sovereignty of Venezuela from a coup led by the United States with its fraudulent puppet government that the entire world knows is a farce — unelected and illegal under Venezuelan and international law. We stand with the Venezuelan government and their legitimately-elected president, Nicolas Maduro.

If you can make it to Washington, DC in the next two days, contact us by completing this form. If you can’t come to DC, please mobilize on Thursday, April 25 at the Venezuelan embassy nearest you to say that the embassy is the property of the Venezuelan government of Nicolas Maduro and that you will protect it from illegal takeovers if such were attempted. This is important because if the US is successful at taking the embassy in DC, other countries may follow suit. 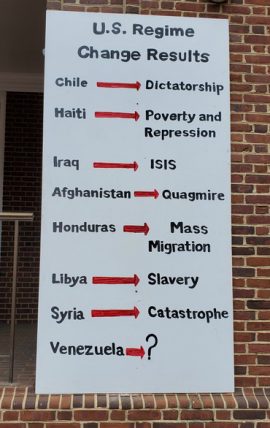 There has been a series of amazing events at the Venezuelan embassy in Washington, DC. The art build organized by the Embassy Protection Collective resulted in the Georgetown embassy being covered with political signs that describe the US coup and the fraudulent, illegal, puppet government. A banner with the “Eyes of Chavez” was installed on the embassy along with multiple other banners. 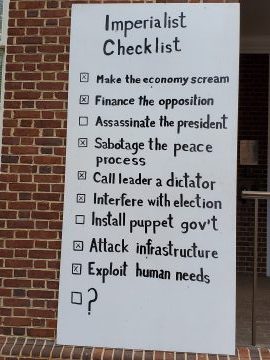 This Wednesday night, the Collective, which was initiated by CODE PINK and Popular Resistance, will be holding a forum with former CIA officer John Kiriakou. Kiriakou will discuss “An Inside View of CIA-Led Coups.” The irony of Kiriakou making this presentation from inside an embassy being threatened by US take-over should not be lost on anyone. That forum will be followed by a nonviolent direct action training for people who plan to resist the next day. And, there will be a light projection displaying images on the Venezuelan embassy.

The Collective has highlighted that what is occurring in Venezuela is a US coup. Billboards attached to the building show the “The Regime Change Checklist,” which describes some of the steps the US has taken to force a coup in Venezuela. Another is “US Regime Change Results,” which summarizes some of the many US coups and their devastating impacts. A series of 32 panels along the front of the embassy describes the chronology of the US regime change campaign.

The Embassy Protection Collective is in the embassy with the permission of the Venezuelan government. The Collective is not breaking the law but serving the people of Venezuela. If law enforcement enters the embassy without permission of the Maduro government, they will be breaking the law and invading Venezuela’s sovereign territory. This is a time when all who oppose US intervention need to show their support by doing all they can to protect the Venezuelan embassy in Washington, DC.