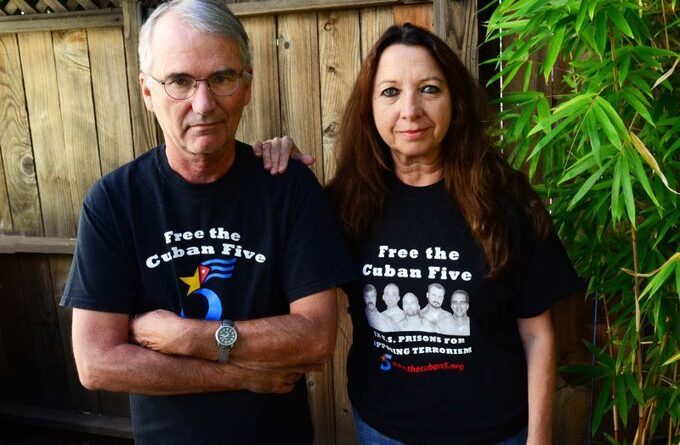 Two days ago, I lost my life partner Alicia Jrapko, founding editor of Resumen in English. She fought a long battle with cancer with the same determination that characterized her life. Her family and I will carry the sadness of her premature departure forever, but we will also be better for the inspiration she left in each of us both, individually and collectively. If you read the beautiful statement we published yesterday, by Graciela Ramirez, editor of Cuba En Resumen, and Gerardo Hernandez, one of the Cuban 5, you will get a picture of Alicia’s full life that, succinctly put, was one of struggle for a better world with a focus on Latin America.

Alicia touched so many people with her calm leadership style and inclusiveness, along with her infectious smile. She was one of those people that you loved to be around and I expected a considerable response when word of her death came out of Cuba; I just didn’t expect it to be the avalanche that it is turning out to be.  I have received messages from all over from the many different types of people she touched. From the Cuban president to scores of Cuba solidarity activists and organizations around the world, to our mail delivery worker and neighbors, and Alicia’s young grandson who ran through our front door Wednesday morning looking for his Abi.

Alicia, who was a university journalism major in Argentina before she had to flee the military dictatorship in 1976, fulfilled her dream by becoming the founder and inspiration behind Resumen in English in 2015. The original concept was, and still is, to bring news and analysis primarily from Latin America-based journalists, scholars, and activists to counter the lies of mainstream media and describe the impact imperialism has had on the region for generations.

That was seven years ago. Since its founding Resumen in English has seen steady growth in readership and followers. In the last year we have been able to add two young Cuban journalists and correspondents in Argentina. It has been an accomplishment that can be traced directly back to Alicia.

As the other editor and her companion, I made a commitment and promise to Alicia that I would do everything I could to keep Resumen in English going. It is a personal and political honor for me to do just that.

Many people who know Alicia have asked what they could do to honor her memory. Two ways you can honor Alicia’s work are to circulate Resumen to friends and colleagues and/or make a financial contribution here in her name.