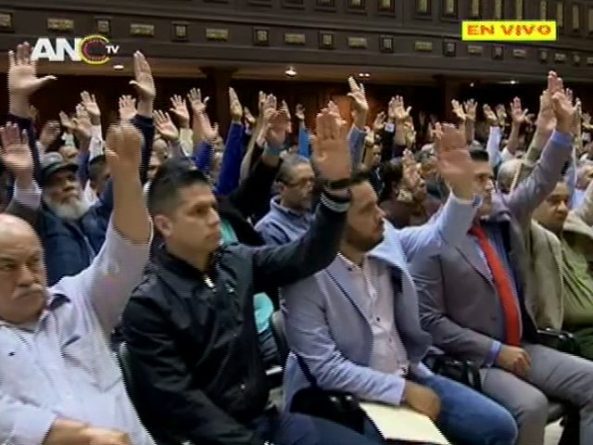 The National Constituent Assembly (ANC) of Venezuela approved on Tuesday unanimously, the lifting of the parliamentary immunity of six male deputies and one female deputy for being involved in the attempted coup last April 30. After the interventions of several constituents, the President of the ANC, Diosdado Cabello, called the vote, approving the withdrawal of immunity from Edgar Zambrano, Luis Florido, Henry Ramos Allup, Richard Blanco, Marianella Magallanes, Simón Calzadilla and Américo Di Grazia .

“It is now on behalf of the competent authorities that justice is done,” said Cabello, who also said that there will be 3 more deputies, who will be lose immunity at the next session.

In VTV broadcast, the constituent Darío Vivas, said that these citizens are part of a group that does not have a political project, “their only intention is to deliver our independence and sovereignty to the transnationals.” Vivas extended his congratulations and thanks for his loyalty and commitment to the homeland to the commander of the REDI Capital, Alexis Rodríguez Cabello, who “appeared alone at the scene of the coup d’etat where those guys were armed, without caring in the least.”

For his part, the constituent for the elderly, Rafael Argoti, said it is the duty of parliament to deepen justice to stop the coup actions of the Venezuelan opposition and make them understand that there is a Chavista force that has seized the bosom and the spirit of the people through the Constitution of the Republic. “This request is for once and for all to begin to materialize the peace and calm of the Venezuelan people,” he said.

Also, Fernando Rivero, stressed that the right seeks a military intervention seeking to snatch the gains achieved by the Bolivarian Government. “We Bolivarians are going to succeed.”

Likewise, the president of the commission on Women’s Rights and Gender Equity, María León, recalled the permanent defeats that the United States (US) Government has suffered in countries with awareness and ideas of social inclusion for their peoples, on the continent. He highlighted among these peoples’ deeds, the victory of Playa Girón in Cuba, when the united people defeated a brigade of American mercenaries, this being the first defeat of imperialism in Latin America.

“We have been defeating them (the US) for four consecutive years since our President arrived, which hurts them. They came with the April 30 maneuver wanting to overshadow May 1st and we gave it a great defeat,” Leon said.