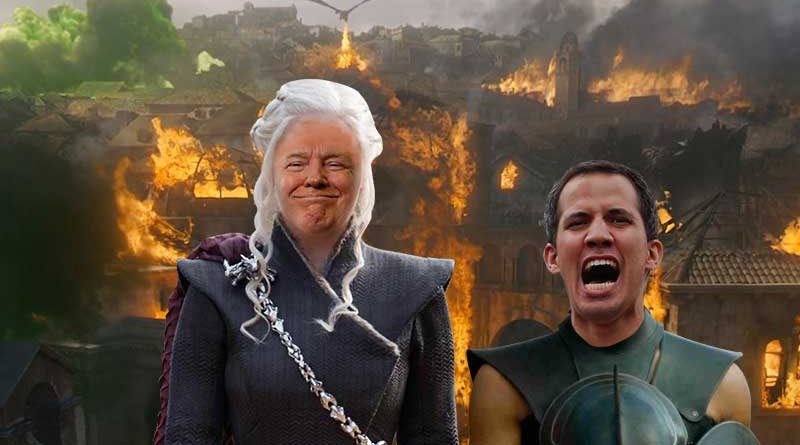 Is it worth making nerdy and easy jokes?

For those who are not the audience of A Game of Thrones, the multimillion-dollar TV show that finishes next Sunday, we have an update: in the last episode broadcast (the 5th), Queen Daenerys (protagonist), who after much suffering and effort got support from other kings, lords, tribes and aristocratic dwarves to recover the power that was taken from her family, went mad and, with her dragon, burned the city -with people and everything in it- that she had to conquer to win, reign, and give a happy ending to the plot. Her closest collaborators gawked open mouthed contemplating the queen’s work of destruction, as if asking: “What crazy woman have I joined? And the worst thing is, there’s only one chapter left to solve this mess and be left among the good guys. ”

Although it seems forced, the analogies that we suggest in the image that accompanies this piece fit with our current reality in Venezuela:

1- The absurdity that we Venezuelans are experiencing, in addition to the terrible circumstances of life in which we have been living for some years now, we now have to endure the punishment inflicted by a foreign power that claims to be liberating us, in addition to the always latent threat of “blood and fire” for all, that the “liberators” imply they will fulfill if their demands are not met.

2- The growing confusion between the local, Latin American and European allies of Donald Trump and Juan Guaidó. Judging by their statements, we can imagine many of them asking the same question as Daenerys’ allies in the face of the application of new and more severe “sanctions” and threats of foreign military intervention in Venezuela: “What madmen did we join?”

3- Gray Worm is the only one of Queen Daenerys’ collaborators who supported her unreservedly, even gladly, in her disproportionate and crazy revenge, and although our self-proclaimed Guaido is not – no way – an “immaculate warrior” tried in one hundred battles, there are those who maliciously suggest that Gray Worm is better for him as a name than “White Dog”.

And if you did not like the joke, because you do not even watch the series, we assure you that at least the summary we provide will serve you to see the final chapter of this Sunday and understand it.