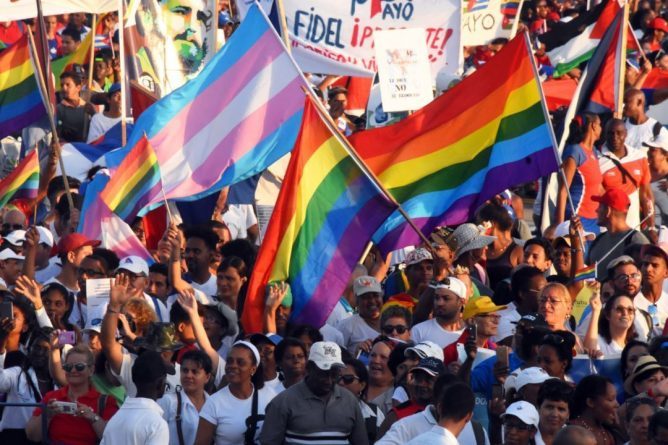 Havana, May 1 — “Unity, Commitment and Victory,” read the lead banner of Havana’s massive International Workers Day march. If anyone expected Cuba would respond with a military theme in the face of aggressive imperialist threats made in Miami by U.S. National Security Advisor John Bolton, they were mistaken.

The Cuban working class answered the U.S. empire’s wild tirades — delivered on the anniversary of the soundly trounced April 17, 1961, Bay of Pigs invasion — with a joyous, disciplined, tightly packed, banner- and sign-festooned celebration led by medical workers in their white coats.

It is accomplished professionals like these who have been maliciously and falsely characterized as a 20,000-member Cuban army which the U.S. claims is in Venezuela. This lie became the stated excuse to devise new cruelty to add to Washington’s nearly 60-year unilateral economic, financial and commercial blockade of this exemplary island.

As difficult as life may get for the Cuban people in the near future because of new U.S. measures, the proof of Cuba’s resilience and progress watched from the José Martí monument in Revolution Square. Appearing there were new President Miguel Díaz-Canel Bermúdez and Communist Party leader and former President Raúl Castro Ruz, who introduced a new, progressive socialist Constitution, discussed by all and overwhelmingly approved on Feb. 24. Whatever new measures the Trump-Pence-Bolton-Abrams horror show finally publishes, the Cuban 5 heroes who joined them won’t be going back to U.S. prisons.

The blockade is a key component of the strategy first outlined in a U.S. State Department internal memo on April 6, 1960, as Cuban Foreign Minister Bruno Rodríguez pointed out in a press conference rebutting the April 17 attacks. The memo admitted the Cuban Revolution and its leaders were so popular that a credible internal opposition could not be concocted. It called for creating economic hardship, hoping to create enough popular dissatisfaction to end Cuba’s independence. But as the bosses and rulers so often do, they underestimated Cuba’s working class. Obama got it right: the blockade failed.

For more than 60 years, Cuba has weathered crises and the blockade through the mobilization and creativity of Cuban workers, through internationalism, unity and solidarity. Not only have the Cuban people kept 1950s vintage cars on the road, but they’ve also developed cancer vaccines, medications to avoid diabetic limb amputations and continue working to solve problems facing humanity, including the dangers of climate change and global warming, with a forward-looking 100-year plan – Tarea Vida.