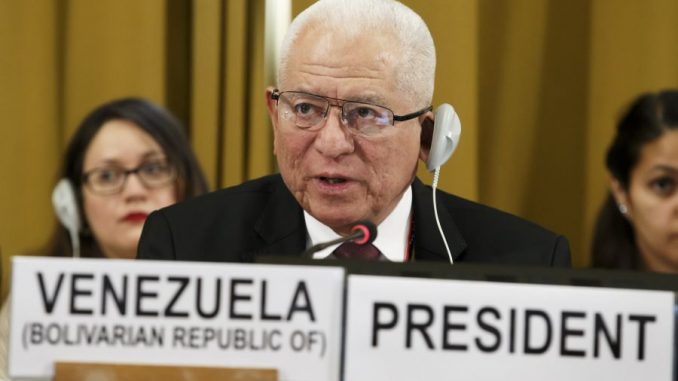 A new attack against Venezuela was demonstrated on Tuesday at the Conference on Disarmament in Geneva, in which the United States and some Latin American countries, which make up the Lima Group, boycotted the first meeting chaired by the Venezuelan ambassador, Jorge Valero.

Regardless of all their diplomatic maneuvers the US and “its docile allies” could not avoid Venezuela taking the Presidency of this important United Nations forum. The ambassadors of Argentina, Chile, Brazil, Paraguay, Panama and Peru decided not to attend the inaugural session of the Venezuelan presidency, which will lasts until June 23, while US Ambassador Robert Woods opted to leave the conference just before the session started.

“We are not going to sit there and listen to diatribes against the democratic values of the United States,” Woods told reporters after leaving the room, according to the news agency EFE. “This presidency can do whatever it wants, but it has no legitimacy because its government does not have it either,” the US diplomat added.

“We have to try to do everything possible to prevent that class of states from presiding over international organizations,” said Wood, the US ambassador on disarmament, after leaving the session in Geneva.

Disregarding US “regime change” operation the one and only Venezuelan government recognized internationally (by the United Nations) is the one lead by Nicolas Maduro.

Today Ambassador Jorge Valero reply to a representative of Trump in the Conference of Disarmament. The US continues to encourage a coup d’etat, evidently unsuccessful, against the democratic and constitutional Government of Nicolás Maduro. @CancilleriaVE #PuebloVictoriosoYAlerta pic.twitter.com/zEperlRNrh

For his part, Valero said that the Venezuelan presidency will try to listen during the weekly meetings the conference will organize for all voices, and establish an “inclusive” dialogue.

In reference to the childish US childish he added: “We regret that the representative of the US and its docile allies continue to bring to this forum matters that are outside the mandate of the Conference on Disarmament…this is not a forum for coup-mongering.”