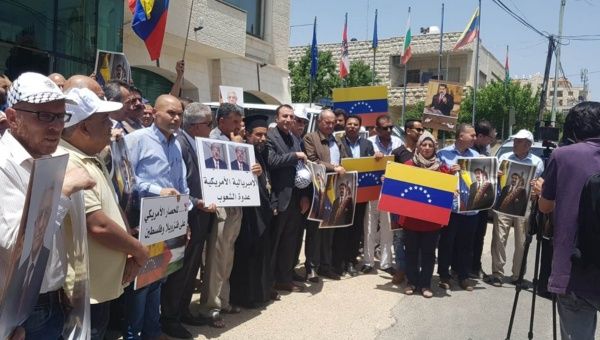 Activists in Ramallah led a rally which denounced the interference of the U.S. in the internal affairs of Venezuela.

Activists and social movements in the Palestinian city of Ramallah held a rally calling for an end to U.S. sanctions against Venezuela and expressed their support for President Nicolas Maduro.

The protest was held this week outside the Venezuelan embassy in Palestine. Venezuelan Ambassador Maher Taha addressed the protest, thanking activists for their support.

A statement from the Foreign Ministry reported that Taha highlighted the close relations between Venezuela and Palestine, which are based on “mutual solidarity and support.” Taha also spoke to the crowd about the crippling human cost of the U.S. economic sanctions, and the illegitimate attempts by the Trump administration and right-wing opposition to overthrow the elected government of President Nicolas Maduro.

In attendance at the rally were prominent figures of Palestine’s political parties, such as Rawhi Fattouh, International Relations spokesman for the ruling Fatah party. Also present was Qais Abu Laila, leader of the socialist Democratic Front for the Liberation of Palestine. Along with other activists, they led the rally which denounced the interference of the U.S. in the internal affairs of Venezuela.

The Bolivarian government of Venezuela has long been a supporter of the Palestinian cause, officially recognizing the Palestinian state in 2009. Since then, the two countries have signed over 18 agreements with the Arab nation in areas such as education, energy and development.

Furthermore, Venezuela has been an outspoken critic of Israel, on two occasions then-President Hugo Chavez expelled the Israeli ambassador in Caracas, firstly in 2006 for the war in Lebanon, then again in 2009 in protest at Israel’s assault on Gaza.