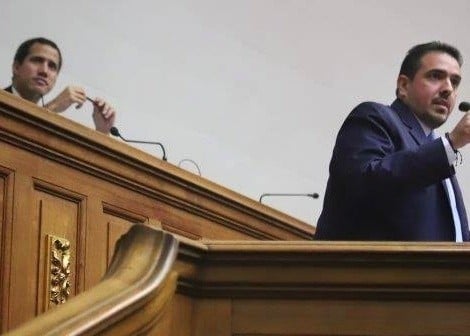 The National Assembly, controlled by the anti-Chavista opposition, approved a new agreement on Tuesday night, which could be interpreted as the end of the Guaidó experiment, to give way to a change in terms of the most extreme position of the Venezuelan right (grouped in the G4), which until recently spoke of the “cessation of usurpation” through any means – including the coup d’etat and assassination – and giving way to the dialogue process that has already been taking place with other sectors of the moderate right.

The document is called “Agreement to corroborate the comprehensive political route proposed to the country that allows free and transparent elections and re-stitutionalization as a way out of the crisis experienced by Venezuelans”, and its approval was strongly rejected in the extremist groups of the right Venezuelan, headed by supporters of María Corina Machado and her Vente party.

“The National Assembly threw away the Statute for the Transition to democracy? Will it be a mistake of who prepared the agenda or makes fun of the citizens that took seriously the cessation of usurpation, transitional government and free elections (tantrum)? ” attorney Cecilia Sosa Gómez wrote on Twitter. She is a former president of the Court Supreme Justice who questioned the actions of right-wing parliamentarians.

And it’s that for her and many other detractors of the Bolivarian government, this could be the “elegant” ending of the supposed “government” of the self-proclaimed Juan Guiadó and the re-incorporation into the democratic game, through the dialogue table, proposed and initiated by the constitutional President, Nicolás Maduro.

“Recognize the call of the entire international community to seek solutions within the framework of the process facilitated by the Kingdom of Norway,” says the sixth point of the agreement. There they also talk about holding “free presidential elections” – although constitutionally the next elections should be the 2020 Parliamentary ones.

In these elections, the agreement says, all the “representative sectors of the country” may participate; which shows that the anti-Chavismo has changed as far as Chavismo is not recognized by them as a political force, a force which, moreover, they wanted to oust from the political game.

“We should speak fluently with you, the PSUV, because you represent a sector of the country,” said “Accion Democratica” deputy Henry Ramos Allup, who said that on the side of the opposition “there are those who do not want to resolve the conflict” and that is why they protest when someone talks about exploring “the electoral route with dialogues and conversations between adversaries”.

RELATED CONTENT: Anti-Chavista Vice President of the National Assembly Edgar Zambrano Asks for “Recognition of the Other”and to End Violence

Another of the relevant parts of the agreement is on the position of the Venezuelan right in relation to the Essequibo, in which the right-wing parties that make up the Parliament finally assume a position of “firm and unique defense around the disputed Essequibo territory, and the unwavering of the sovereignty of the territory ”, as the fifth part of the document says.

This contrasts with the position that was unveiled days ago through an audio where the pseudo-ambassador of Guaidó in the United Kingdom, Vanessa Neumann, mentioned that her political group should not fight for the defense of the sovereignty of this territory with Guyana, following instructions from the British government

In this sense it can be seen how the Justice First, Democratic Action Parties and even the Popular Will itself are taking a turn in their most radical position, perhaps shuffling the deck to know who will remain with the presidency of the AN for the last session of this current parliament, before the new deputies of the legislative power are elected by the popular vote in the 2020 elections.

It is also a pretty big blow to the supposed leadership of Juan Guaidó, who has been heavily funded by the administration of US President Donald Trump to establish him as “the figure of the political transition” in Venezuela.

This position of the political parties adds, also, to what a sector of the commercial bourgeoisie expressed in a meeting held last September 26 at the Metropolitan University, where again the president of Polar Companies, Lorenzo Mendoza, could be the new antagonistic representative against the revolutionary forces.

He presented himself as the head of an elite that recognizes the failure of the Guaidó experiment and now tries to do “damage control” after the excesses committed by the extreme right groups during 2018.