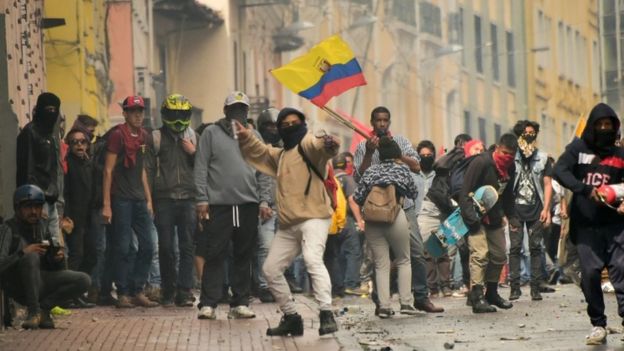 The president of Ecuador, Lenín Moreno, decreed on Thursday a state of exception in the South American country in response to the strong demonstrations that have been generated after the application of the recent economic measures, today called “package”.

“I have arranged a State of Exception to protect order, citizen security and in order to control those who intend to cause chaos. We will not accept blackmail and we will act according to the law,” said the ruler through his Twitter account.

Among other things the new IMF package reduced vacation days from 30 to 15 for workers and lifted the subsidy on gasoline, provoking an increase of 130% on this essential item.

He said: “The measures we take together are firm, there is no possibility of change, especially those related to the subsidy that causes so much damage to the country.”

After this decree the President of the Republic may:

RELATED CONTENT: The IMF is Hurting Countries it Claims to Help

-Decree the anticipated collection of taxes.

-Use public funds for other purposes, except those for health and education.

-Transfer the government headquarters to any place in the national territory.

– Have prior censorship in the information on the social media with strict relation to the reasons of the state of exception and to the security of the State.

-Establish as a security zone all or part of the national territory.

-Decide on the deployment of the Armed Forces and the National Police and call to active duty to the entire reserve or a part of it, as well as to the personnel of other institutions.

-Provide the closure or authorization of ports, airports and border crossings.