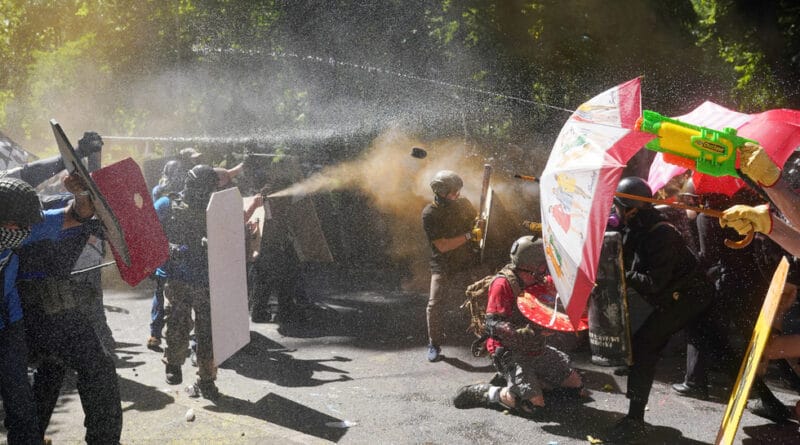 August 22, 2020.-  Portland police have explained why they chose not to intervene in violent clashes between heavily armed right- and left-wing groups, insisting they “willingly engaged in physical interactions” which “quickly resolved themselves.”

Responding to criticism over why the Saturday events downtown were not declared a riot, Portland police said the officers were heavily outnumbered and lacked crowd control resources to address such a massive and violent gathering.

Another mass brawl breaks out in downtown Portland. Proud Boys and other right-wing groups rush in and fight #antifa, who are pushed back. Bats, sticks and pepper spray are used in the brutal melee. #PortlandRiots pic.twitter.com/2BgrE2YmOT

Hundreds of people belonging to multiple rival groups with “various ideologies” descended on Downtown Portland around noon, while the police had “roughly 30 officers available for crowd management.”

As the leftist Antifa and Black Lives Matter activists clashed with right-wing groups led by Proud Boys, police remained on standby, providing “announcements asking for the groups to separate and move to the sidewalks and also to self-monitor for criminal activity.”

The yellow is good but I'd like to see rich, dark blues, some purple and of course plenty of bright red. Peppy pepperspray!

Do they make glow in the dark mace?

Sporadic brawls continued for several hours, with protesters in body armor and gas masks – many armed with bats and shields – rushing at each other, throwing various projectiles and deploying pepper spray. Authorities claimed they watched the altercations closely, but:

“Each skirmish appeared to involve willing participants and the events were not enduring in time, so officers were not deployed to intervene.”

I’m not entirely sure what happened here but it looked like antifa were trying to throw a firework explosive at the right-wing side but it blew up in their faces instead. #PortlandRiots #antifa pic.twitter.com/BLrmTKodMM

Insisting their main goal was prioritizing safety while balancing First Amendment rights to free speech and assembly “regardless of the opinions expressed,” police admitted that another reason for not intervening was the fact that the officers had been “the focus of over 80 days of violent actions.”

“Incident commanders have to weigh out the entire situation to determine if police action is likely to make things safer or not.”

Police were only responding to certain incidents or criminal activity, like reports of a “male subject” pointing a firearm at the crowd.

Fighting in the streets pic.twitter.com/8EnuhN5V4q

When the disturbance subsided and shifted out of the park area across the street of the Justice Center, police moved in to seize several abandoned shields, as well as a “bucket containing condoms filled with an unknown liquid substance and a water bottle with what appeared to be urine.”