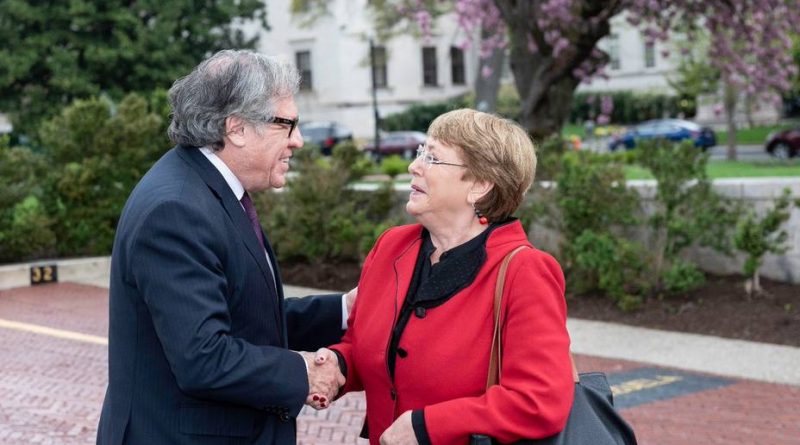 Michelle Bachelet’s report on human rights in Venezuela has all of the requirements to have an outstanding place in a universal encyclopedia of infamy. Above all because the U.N. High Commissioner on Human Rights has a duty to the mandates of the Charter of that organization, to the agreements of its Human Rights Council and other agencies which are in the end disregarded with her paper.

This report does not mention Washington’s economic war against Venezuela and its terrible effects in the population, and doesn’t even hint at demanding the end of this brutal aggression. It omits countless crucial facts. Among them, the fierce violence of an opposition headed by the United States in marches and in smoldering street barricades, as well as repeated coup attempts amidst a context of a hybrid war aimed at overthrowing the Bolivarian Government since 2002, eliminating Chavismo physically and seizing the vast natural resources in the South American country.

A tendency to coups? Hybrid war? Economic war? Doesn’t exist. According to Bachelet, what is going on in Venezuela are just the Government’s violations of human rights. There is not a serious humanitarian or human rights crisis either in Haiti, Honduras, Guatemala, Colombia, Yemen, Somalia, Libya, Afghanistan, and Palestine occupied by Israel. Never any criticism of neoliberal policies sinking into misery millions of Argentinean and Brazilian citizens who had been taken to a decent standards of living under the governments of Cristina Fernandez and Luiz Inacio Lula da Silva, respectively —actions that represent mass violations to the economic, political and social rights of those populations. Neither the Trump Administration’s campaign of state terrorism against millions of migrants, his exacerbation of white supremacism, xenophobia, racism, and misogyny.

What country is Bachelet talking about? The one she is referring to in her report is not the one I’ve visited many times during the revolutionary period. It is not that of millions of people marching to support their government; not that of the large number of students at all educational levels; not that of health care programs through which Venezuelan and Cuban doctors turned health into a universal right; not that of equality among men and women or the acknowledgment of sexual diversity; not that with the least inequality in our continent according to the respected U.N. Economic Commission for Latin America and the Caribbean; not that with exemplary participatory and electoral democracy; not that with joyful and educated youth. It is not either the country with almost three million new decent homes.

I am not trying to sweeten reality, I do not hide either my militant commitment to the Bolivarian Revolution. But when it comes to investigating and describing a reality, the least you may have is observation and meticulous verification of the facts instead of imbalances or a completely discriminatory, unilateral, selective and biased exercise. Mistakes have been committed in Venezuela the same as in every revolutionary process. There is bureaucracy and corruption —any Chavista admits it and denounces it. The bourgeois state hinders the revolutionary advance and security agencies may carry out excesses which are investigated and frequently punished. But none of it can be analyzed unless taking into account the country’s subordination to the United States’ domination system, expressed in the model of rentier state and underdevelopment. Not even if it is ignored the ongoing war against the Bolivarian Revolution precisely because it has had achievements in transforming that reality in matters of sovereignty, social justice, human solidarity, broad democratic liberties and the real exercise of human rights —including economic achievements now veiled by the blockade.

How can Bachelet justify that not one of the 588 interviews in her report were carried out in Venezuela? What were she and her team doing for weeks in the country? How can she explain that the secretary who drafted the report is the same that did this task for the previous High Commissioner —Jordanian prince Zeid bin Ra’ad Zeid al-Hussein— who is strongly linked to repulsive OAS Secretary Luis Almagro and Leopoldo Lopez?

Reports and testimonies of 12 nongovernment organizations were excluded from Bachelet’s report according to Maria Eugenia Russian, chairwoman of Fundalatin, an NGO with Consultative Status to the United Nations Economic and Social Council.

The High Commissioner did not take into account for her report the papers drafted by two U.N. Independent Experts on the Promotion of a Democratic and Equitable International Order —Alfred de Zayas and Idriss Jazairy— who strongly condemned the economic sanctions against Venezuela blaming them for the hardship endured by the population.

The Bachelet report, in the end, seems to have been drafted by Almagro. Two peas in a pod.