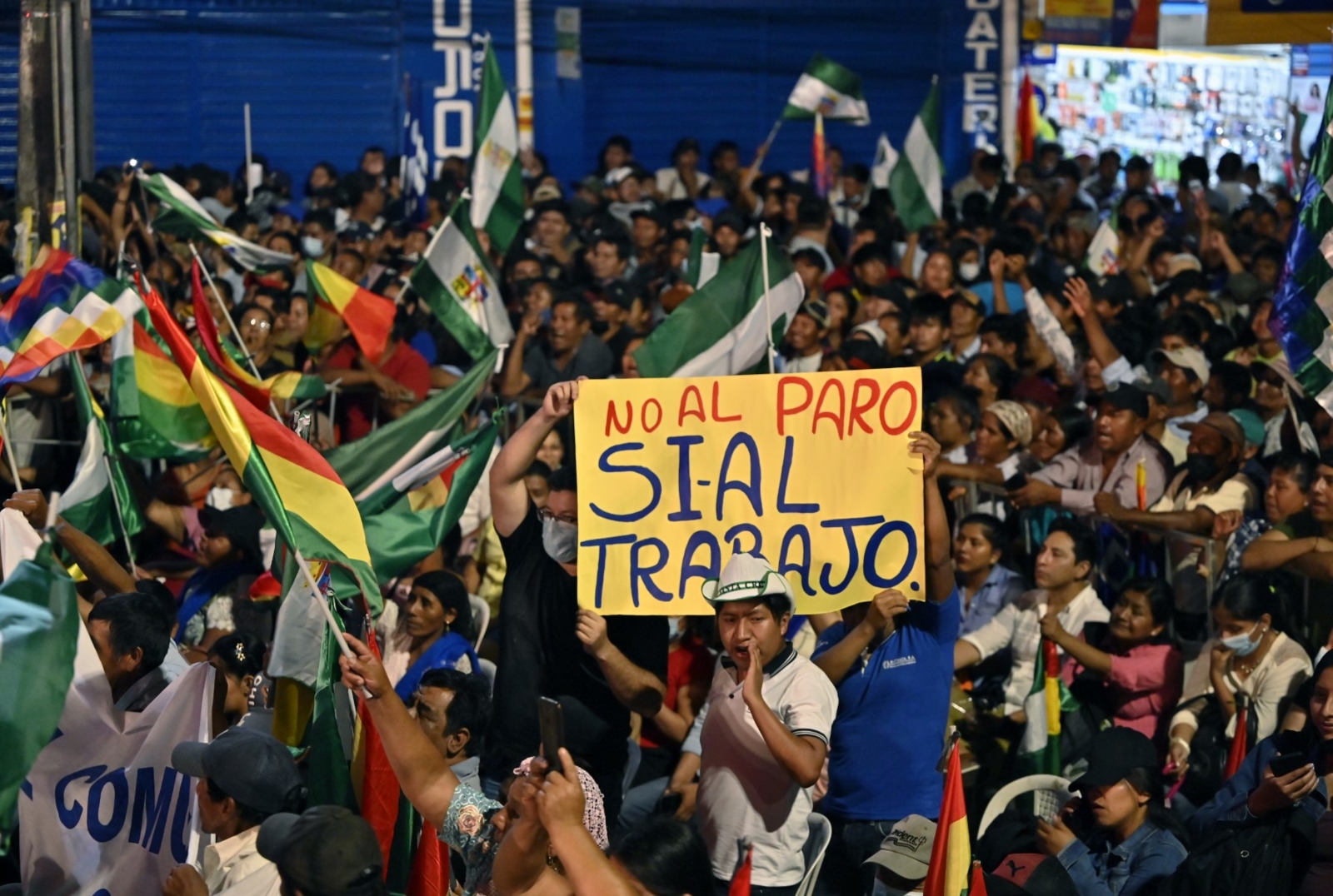 The ultra right-wing governor of the department of Santa Cruz, Luis Fernando Camacho, and his separatist clique have been maintaining a strike of the elite and the bosses against the government of Bolivia since October 21, which has already cost one life and economic losses of tens of millions of dollars. Camacho and the leaders of the Civic Committee for Santa Cruz demand that the population and housing census, postponed for technical reasons for a year later, be brought forward to 2023.

It is worth remembering that Camacho is one of the most reactionary, racist, pro-imperialist, and patriarchal politicians of the Altiplano country and was one of the most prominent protagonists in the organization of the coup against Evo Morales in 2019, initiated with a strike very similar to the current one, which dragged in important sectors of the middle classes of Bolivia. But today, the conditions are not the same as then; the Movement towards Socialism (MAS) gained in experience and consciousness. MAS is in power following  a great electoral victory in which it defeated the right-wing coup, receiving more than 55% of the votes to the next highest candidate’s 27%. Combat morale is high.

On the other hand, the Santa Cruz demand regarding the census has not materialized in other departments of the country. The strike does, however, have the capacity to damage the regional and national economy due to the extraordinary economic and commercial importance of Santa Cruz. The census is important, among other reasons, because it has to do, by law, with the allocation of resources by the national government and the number of representatives in the Chamber of Deputies, where Santa Cruz could increase by three seats, although at least one would be for MAS, the second political force in the department. However, it is not understood that postponing the census, for technically well-argued reasons, is a cause to create a national political conflict, with serious economic consequences, at a time when the economy is recovering steadily from the effects of the pandemic, the disastrous economic management of the coup perpetrators, and the international crisis.

The government of La Paz, from the very beginning, set the position of maintaining the dialogue with the government of Santa Cruz, but it did not do more than initiate the talk between María Nela Prada Tejada, minister of the presidency, and Camacho, when the latter decided to leave the table and abandon it, furious because his demands were not being met. The national government even agreed to consider the possibility of advancing the census if the Santa Cruz government technicians could demonstrate that it could be handled properly. More than a strike, it is a road blockade and mandatory closure of businesses and establishments which has hardly any popular support.

The MAS called a Great People’s Council on October 23, which was attended by hundreds of thousands of Santa Cruz inhabitants, who rejected the strike. Many of them not only disagree politically with the strike, but it affects them economically, as is the case of the workers of the informal economy and the agricultural producers of the region. Attendees stated: “before the announcement of an indefinite strike by the Civic Committee pro Santa Cruz, the Great National Council in Defense of Democracy and the Economy developed on October 21, 2022, at the foot of the monument of Chiriguano, in the city of Santa Cruz de la Sierra, with the participation of the people of Santa Cruz, workers, Indigenous nations, natives, workers, peasants, intercultural organizations, economic and productive sectors of the countryside and the city, women’s organizations, trade unionists, transporters, students, university students, cooperatives, micro, small and medium entrepreneurs, artisans, artists, seniors, people with disabilities, youth and organized civil society, with the firm democratic conviction and within the framework of respect for the norms that govern the Plurinational State of Bolivia, the sectors of society demand that the intentions to destabilize the national government, which has democratically won the national elections of October 2020 with more than 55%, led by Lucho Arce and David Choquehuanca, be stopped”.

The United States and the Latin American oligarchies have resigned themselves to the existence of social transformation processes in Latin America and the Caribbean, even more so when they are led by successful, sovereign, and combative governments such as those presided over by Luis Arce and David Choquehuanca. That is why, although the coup and all the maneuvers of the OAS Secretary General Luis Almagro to keep the dictator Jeanine Añez in government were defeated, and despite the fact that the MAS and its candidates Arce and Choquehuanca were legitimized with an overwhelming vote, the northern empire will continue to do everything possible to stifle the process of change in Bolivia.