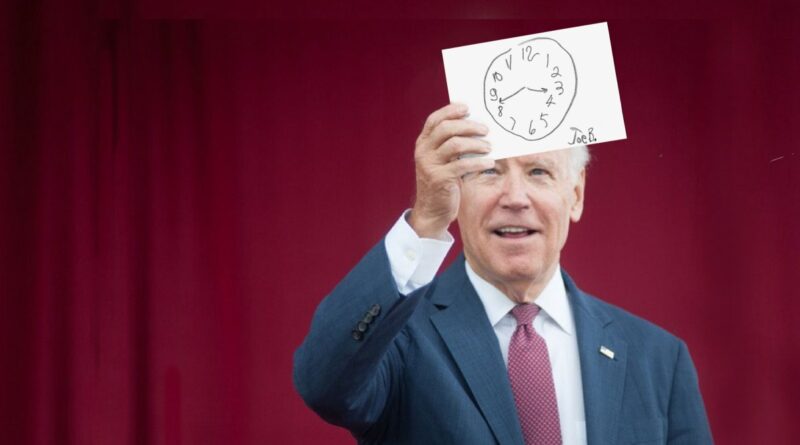 In a surprise move, President Biden live-streamed himself taking a cognitive test with a White House physician today in order to silence speculation that he is suffering from any type of degenerative neurological disease.

During the test the president was asked to remember a series of words and then repeat them sequentially some minutes later, then to accurately hand-draw the face of a clock. Biden completed these tasks quickly and without difficulty, then held an immediate press conference.

“Sorry to drag you all out here after eight PM, but I wanted everyone to see that my cognitive functioning remains at peak levels even well after the sun goes down,” the president told reportersafter the test. “I don’t know how all these conspiracy theorists imagined the country could go on functioning if its leader had Alzheimer’s disease, but I’m just glad to shut ’em up once and for all.”

Jill Biden, who also attended the press conference, took the opportunity reiterate that this proves once and for all that she was not participating in elder abuse by pushing a dementia patient to pose as a powerful statesman.

“I was not, will not, and would never participate in elder abuse,” the First Lady said emphatically. “This was never about my personal ambition to become First Lady, nor was it anything to do with the many ball gowns I bought online over lockdown. Even if they aren’t the kind of dresses you can wear just anywhere, I would never pump my husband with frightening amounts of pharmaceuticals and force him out on the hustings over a few, admittedly quite exquisite, frocks.”

The president then went on to sign multiple executive orders halting deportations of undocumented immigrants, freeing the children from detention camps at the border, mandating a $15 an hour minimum wage, re-entering the Iran deal, pressuring Saudi Arabia to end the genocide in Yemen, and honoring many promises he’d made along the campaign trail, placing a wide distance between the Trump administration’s policies and his own.

This politically savvy move by the US president comes as a surprise after his previously snapping at those who’ve suggested he take such a test. It also strikes a severe credibility blow to those of us who’ve been saying that the 78 year-old has been exhibiting signs of significant cognitive decline and probably shouldn’t be responsible for the operation of the most powerful military force ever assembled.

RELATED CONTENT: Stop Calling It A “Stutter”: Here Are Dozens Of Examples Of Biden’s Dementia Symptoms

Speaking for myself though, this is one thing I’m happy to have been conclusively proven wrong about. Can you imagine if the most powerful government on earth was headed by someone whose brain doesn’t work properly? That would be nutty, and would effectively prove that America’s official elected government is just a performative illusion which has no bearing on the actual functioning of America’s behavior on the world stage.

And just think about what the horrifying implications would be if that were true. If it didn’t matter whether the president’s brain looks like swiss cheese and America’s official political system was a fake pro wrestling-style performance overlying an unelected power structure, comprised for example of a loose alliance between plutocrats and government agency insiders, it would mean the American people have no meaningful say in what their government does. It would make the act of voting a meaningless sideshow distraction designed to give people the illusion of control while the most powerful government on earth wages wars and exploits people internationally and domestically guided by nothing but profit motive and geostrategic control agendas, effectively meaning that the world is ruled by an unaccountable oligarchy of greedy sociopaths.

So it’s a good thing it’s not true.

After being proven so conclusively wrong about all this I promise to take this humbling lesson on board, to re-evaluate my worldview accordingly, and to do better, from this point onward. As of today, this first of April 2021, my readers may consider me a changed woman.