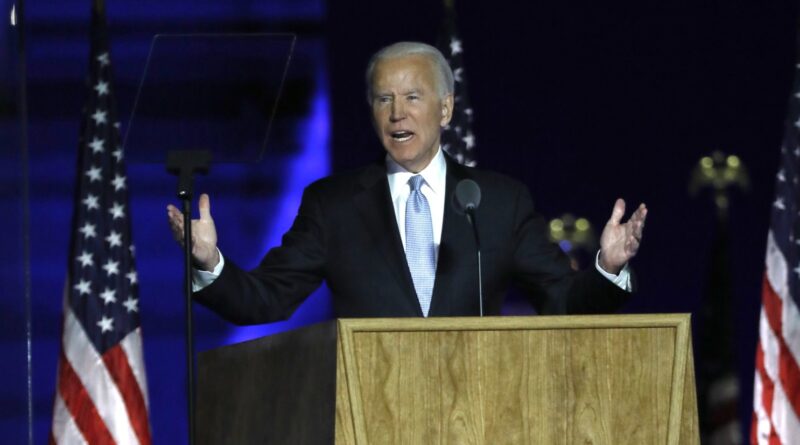 My friends. Let us have some of the honesty and steadiness of revolutionaries. Let us be calm, bold and in the forefront of our class—the working class.

It is of the utmost important that we not base our necessary optimism for the coming socialist revolution during these increasing times of crisis and opportunity on a foundation of illusions.

It is undeniably the case that workers and oppressed people—and most socialists—are cheering for mass incarcerationist and war criminal Biden, a man who—in the “annals” of history—will go down as a gruesome and corrupt monster and an enemy of the people. They are cheering on Harris. Her establishment career was also made on the caging of black and brown bodies.

Biden and Harris are cops and cop enablers. No amount of prevarication will undue this truth.

Contradictions and the knife

The celebrations for Biden/Harris are understandable. Trump is a monster too. A more obvious monster with power. (But we should not be afraid of monsters. We should take matters into our own hands and vanquish them.)

We should in no way be pessimistic because masses of people are lauding a man who championed the genocide of Iraq and the fascists are the only ones in the street opposing him and calling into question the thoroughly undemocratic U.S. elections.

(U.S. elites rig elections and overthrow democratic elected leaders all the time. They destroy countries that do not kneel to imperialism. They monopolize the U.S. electoral process.)

The struggle against capitalism is real and riddled with contradictions—contradictions that must be navigated with a scalpel-like precision.

The celebrations for Biden and Harris—all across this land—are very, very real. They cannot be explained away as merely anti-Trump sentiment.

Notching the vote up to an anti-Trump wave breeds false hope and encourages the myth that the working class is in a better position to fight under a Biden administration. Why would actual working and oppressed people—for the foreseeable future—fight the system for their rights under Trump’s triumphant and lauded “vanquisher” when they were so easily pacified by Russiagate and the illusion that the next election is going to change anything substantial?

To be a revolutionary means to stand with your class and alone at the same time. It means standing steadfastly for working-class power.

Working class and oppressed people are fighting/will fight because they have to, not based on who happens to be president. The street fight against Trump stopped. He was not forced from power by the people. He is being replaced by the system that oppresses you and will continue to use fearmongering of people like Trump to keep you in your place.

The street celebrations for Obama—who destroyed Libya, an African country, and strengthened ICE in order to deport more people than any president in history—did not lead to a strengthened working class. Biden’s ascension will not strengthen us—only independent working-class power will strengthen us.

Biden is a wolf who hasn’t even pretended to put on sheep’s clothing!

The Biden administration and working-class power

A Biden/Harris administration may enact a few more reasonable policies and positions. That is true. They may have a better approach to the pandemic. (They may also fail just like every democratic governor has failed to save lives—lives which could be easily saved in the richest nation in the world, btw). They may provide economic relief to people in order to save capitalism. They also may not, for they prioritize profit over people just like the other party.

Biden is the pick of the ruling class, the FBI, the CIA, the pentagon, etc. His administration, full of wall streeters and warmongers, will exacerbate the climate crisis, white supremacy and global conflict and there will be no movement from the working class against Biden’s policies for the foreseeable future.

That doesn’t mean the masses will not revolt. The conditions, in fact, demand rebellion. The white supremacist surge, unchecked by the state, will require the working class to rise up. Has the 2020 election victory of Biden helped to pave the way for an independent militant working-class movement?

For the coming rebellion to turn the tide and ultimately seize power, an independent working-class leadership must emerge that does not waver in its grasp of the material conditions.

The masses of workers and oppressed people, for the planet and the people, must break with the democrats—the establishment really—and the social democrats. Alliances are possible, and necessary, but only on the basis of strengthening the independent organizational position or political consciousness of the working class.

For example, critical and provisional support for the Sanders campaign was possible because the massive movement behind him was taking on the establishment, however contradictorily, on a working class, progressive basis. Such alliances are always temporary whether they last three minutes or thirteen years.

The ruling class of the United States won the 2020 election. So too did the barbarous pentagon (imperialism won at the polls on 2020). So too did the racist lynching police forces.

So too did the democratic party, one of the most powerful, two-faced and oppressive political parties in the history of the world.

To say that Trump was defeated because he seems likely to have been defeated in the elections is utter nonsense and completely ignorant of how power really works. To assume that the deal is done—that Trump is going to be destroyed by the state through the courts and the media—which may happen—is foolishness. Trump’s potential army is real and ready to fight. He got 72 million+ votes despite everything.

Will the system that let Trump govern for four years with such meek resistance and a will only to pacify and further oppress the rising up population really get rid of the Trump’s the world? That is laughable!

Trump’s lose in the election to Biden, a candidate who offered nothing in terms of actually setting the population in motion to fight for the solutions to problems that must be solved in the short term, could actually amplify Trump’s role in society. After all, Biden promised more money for lynching cops and is not in any way affirming that he will bail people out from the current economic crisis.

Trump, with his popularity, could easily step up and really innervate his massive base to take even greater action, partially or wholely based on the wall street character of the Biden administration. If you need an example of what that will mean, just look at how the open-up movement mobilized, the democratic governors capitulated and now we have nearly 300,000 people needlessly and grotesquely dead from the pandemic!

Now, it is entirely possible, maybe even likely, that Trump will not lead the emerging reactionary political movement that is independent of the establishment and aided financially by some sectors of wealth.

The white supremacist movement that is challenging the election may or may not be defeated in the short term, but the racist U.S. capitalist system cannot extinguish this movement any more than it can allow a socialist movement to grow. The democratic party leadership has always ruled on a foundation of capitalism and racism.

The fact that Biden authored mass incarceration and is now the democratic party’s leader and the presumptive leader of the country tells you all you need to know about the party. They will not be partners in the coming fight against white supremacy. In fact, they will continue to tell you to wait for them to act as the world burns from climate catastrophe, pandemic, global conflict, etc.

The democratic leadership will, for instance, ramp up the racist war on China and the Russophobia—sending the world to the precipice of annihilation.

If we are to be honest, the people of the United States did very little to stop Trump, despite a very encouraging resistance after his 2016 victory. The democrats and the media used Russiagate and the 2018 elections to completely pacify the resistance.

To the extent there has been resistance to the system it has been spontaneous and unorganized, and focused on individual sectors of society. The revolt after George Floyd’s execution was hopeful and powerful, but has gone nowhere. No leadership emerged to harness this energy into an independent force. Instead of genuinely uniting with other struggles, the only path to victory, the unifier of the movement became voting—voting for Biden and Harris.

The strength of the elections for the ruling class is that the questions raised are all about power and unity. The ruling class can use shallow talking points and hollow words to temporarily unite sections of the working class, inject them with hope for the mythologized american project and bring a round of struggle for justice to an end.

The ruling class and the people both want peace—different kinds of peace. Will you be pacified and subservient or will you realize that peace is only possible once we go to war with the ruling class and defeat them? An unequal and oppressive system cannot institute peace. For that we need Socialism. We must not only be unafraid to raise the banner of Socialism, we must raise it higher than ever.

As the past 40 years have shown, the elections do not bring peace or offer anything substantial in terms of solutions to capitalist-induced catastrophe. The battle lines become more and more clear. The battles become more heated. We need to take matters into our own hands. We need to have real power—working-class power.

Socialism, the victory of the working class over the capitalist system, is the only solution to the problems we face.