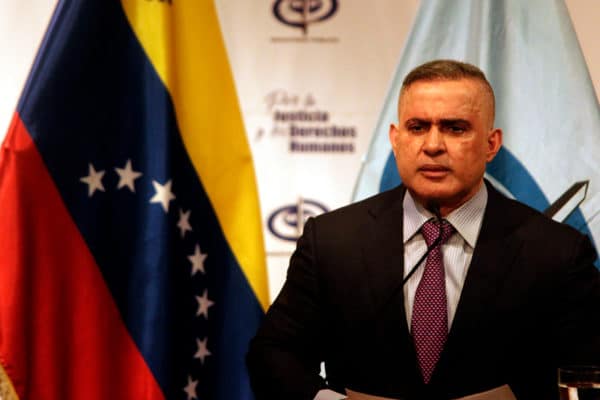 “I will never tolerate, I did not in the ’70s, the ’80s, or the ’90s, and not now, in a State position, a police officer invested with a badge, a patrol and a pistol, in command of other policemen, to be associated with criminals, or to rob merchants, decent people and businessmen,” said the Attorney General of Venezuela, Tarek William Saab on Monday.

During a televised interview he reported that complaints have been received from officials regarding the Special Actions Forces (FAES). “They rob people,” said Saab, “they take them out of their cars, if they have money they take it away, and this is something serious—we have received reports of kidnappings. Not only express kidnappings of criminal gangs, but also kidnapping promoted by police officers,” he commented.

“I have received two complaints related to the FAES, again, and I don’t understand what’s happening with that, there are between 800 and a thousand police officers in that agency, nothing more. In Venezuela there are more than thirty million inhabitants, it’s false that, only because of them, crime has been reduced in the country,” he said.

“I say it responsibly and without fear,” stated Saab indignantly, “it cannot be that I received today two reports of kidnapping by FAES agents. They are from Zulia, and the Municipal Police had to intervene. In a case related to a farmer in Zulia, they began to dig a grave! We appointed a National Prosecutor to investigate this.”

He called on the country’s police to respect human rights in the country. “We’re going to go with the full weight of the law, otherwise this bad example can be replicated by other security organizations in the country. We’re investigating and there will be prisoners. Other police officers might copy this bad example, and that cannot be the case. The Public Ministry has prosecutors deployed throughout the country,” he said, while confirming that those are acts of police corruption.

“Of the cases that have entered the International Criminal Court (ICC), the vast majority have met justice in Venezuela,” he said.

In relation to this, he pointed out that in this case, due to the actions of the country’s justice institutions, the complementary system, that is, the International Criminal Court (ICC), does not act or intervene.

The prosecutor explained that, on the contrary, the complementary institution would act if the State were to fail, “as happens in Colombia,” emphasized the head of legal anti-criminal action in Venezuela. Saab gave details of his meeting with the ICC Attorney General, Fatou Bensouda, in The Hague on November 4.

Saab indicated that in the coming days they will submit more information to the international body demonstrating the actions of the State, and added that he confirmed with Bensouda Venezuela’s willingness to strengthen cooperation ties in the fight for the protection of human rights.

The ICC has a study on the cases Venezuela I (2018) and Venezuela II (2020), which remain in a preliminary examination phase with a view to making a decision.

Saab recalled that the criminal efforts of the US authorities and their vassal governments have prevented the purchase abroad of medicines, food, spare parts, goods and products necessary for daily life, while preventing the sale of oil, leading to the theft of gasoline and the obstruction of social policies to distribute wealth to Venezuelans.

He commented that unlike the first investigation (Venezuela I), the second has evidence, testimonies and public statements from senior US spokesmen, including President Trump himself, who have announced their interest in achieving economic collapse in Venezuela to cause suffering to the people, to push them towards violence, and to use this as the excuse for the overthrow of a legitimate government.

“Venezuela II is the country’s complaint against the United States in the International Criminal Court for crimes against humanity based on these coercive measures. The damage of these actions is infinite,” he lamented.