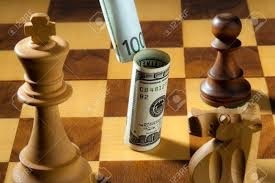 The first days of 2019 has brought a new demonstration that the unofficial dollar is a political weapon: in just two weeks it took a brutal leap, superior to almost all of the ones that happened in 2018 without there being economic causes that can explain it. 781 Bs/US$ was the unofficial exchange rate on December 28, 2018 and as for today it is 2440 Bs/US$.

The justification handled by the analysts on the right is the classic self-fulfilling prophecy: “the phenomenon is a product of the uncertainty generated by the international climate that is adverse to the inauguration of President Nicolás Maduro for his second term.”

This practice of self-fulfilling prophecies through the manipulations of the illegal exchange rate has already become a habit. Experts predict that the dollar will rise due to political instability and will immediately unleash speculation by decision of the factors that control the parallel dollar. After the clean-up in the price of the illegal dollar, the experts congratulate themselves for the correctness of their forecast.

The bullish strategy is sustained and inclement: in the previous days it was declared that the increase is a consequence of nervousness for what may happen; then the facts themselves are held responsible; and then the sequel of the facts is blamed. It is a perverse spiral.

However, some analysts have tried to give economic explanations to the vertiginous rise of the parallel exchange rate, although none of them seems to be the cause of such a brutal and atypical devaluation.

The main one of them is that there are few dollars in circulation due to the fall of the oil income, consequence of the decrease in the national production. As Venezuela depends almost exclusively on the dollars generated by PDVSA, the available supply is limited. This is, there is no doubt, a structural cause of the situation, but not the specific cause of this January madness.

Another argument has to do with PDVSA, but it refers to a matter of internal economy: the company began the year making late payments to contractors, which overburdened the economy of bolivars that, immediately, struggled to become dollars.

This last aspect leads to another of the elements at stake in the issue of foreign exchange, which is the dollarization of large sectors of the national economy, including very everyday activities such as retail and services. Naturally, the more people intend to trade their operations in dollars, the greater the demand for the US currency and the speculators can make theirs.

The responsibility of the government

At least three points about the behavior of the illegal exchange market are attributed to the government as a net liability, that is, they are also very political in nature.

The first is the continuation of the irregularity of the smuggling of fuel and other necessities to Colombia, criminal operations that are the basis of the so-called dollar-Cúcuta business. The government announced on August 20 that it would establish international prices for fuels and maintain the direct subsidy to citizens by way of the country’s identity card, but this measure has not been materialized yet.

The second element that the government is blamed for is the signals it issues through the auction mechanism of Dicom, which has not been sufficiently transparent for the country as a whole. In addition, the most recent auctions have also involved a sharp devaluation of the bolivar.

The third aspect attributable to the government is the enigmatic policy around the petro. It is assumed that the Venezuelan cryptocurrency depends on the price of oil, but the variations of its value so far do not seem to have a clear connection with this factor. According to some experts, the petro has thus become an additional justification for currency speculation.