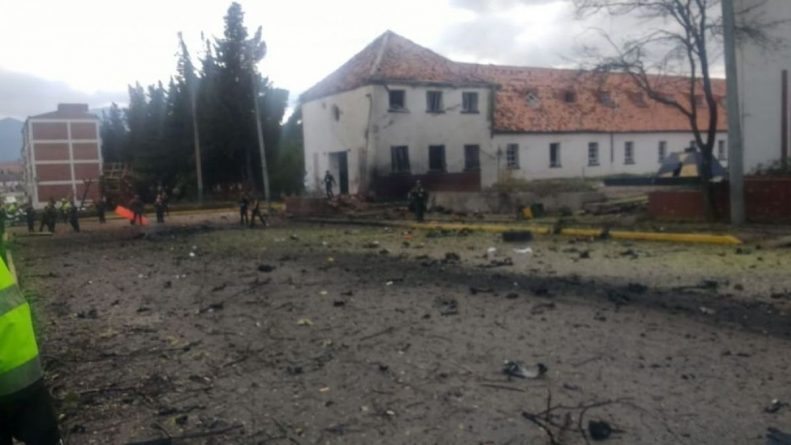 At least eight people have been killed and 12 injured after a car bomb exploded at a police station in Bogota, Colombia‘s capital, according to the city’s mayor.

The explosion occurred at a police academy. Ambulances and helicopters have rushed to the normally well-guarded facility.

Images posted on social media showed a charred and burning vehicle surrounded by debris. The police barracks buildings nearby are pockmarked with damage from the blast.

The target of the car bomb was the General Santander National Police Academy, in the south of Colombia’s capital city.

The death toll, reported by the defence ministry, currently stands at eight, with a further 12 people injured.

Leftist rebels from the National Liberation Army (ELN) group have stepped up attacks on police in Colombia in recent months as peace talks with the president Ivam Duque have stalled. No-one has yet claimed responsibility for today’s bombing. Last week the ELN rejected Mr Duque’s demands for a unilateral ceasefire before negotiations in Havana resume.

Mr Duque, who had been visiting a western state of Colombia, announced shortly after the explosion that he would be immediately returning to Bogota because of what he called an “miserable act of terrorism” against the police.

“All Colombians reject terrorism and are united in confronting it,” he tweeted, adding he had ordered every effort to be made to find out the perpetrators and bring them to justice.

“Colombia is saddened but does not bow before this violence.”

One local councillor in Bogota, Emel Rojas, said on Twitter the whole city was in mourning over the “cowardly act”. “Solidarity with the families of the victims,” he wrote.

A national senator, Paola Holguin, tweeted images of the aftermath of the blast, offered her “solidarity” with the Colombian National Police and urged rejection of terrorism.

Local reports suggest the vehicle laden with explosives drove into the police academy at full speed before detonating.

One witness said they heard a “very strong explosion” and posted images on Twitter of the devastation caused by the blast.

During the worst of Colombia’s long battle against leftist rebels or drug cartels bombing attacks were not rare.

But as the conflict has wound down in recent years and following the disarmament of the largest FARC rebel group in 2016 security in Bogota has improved.

A year ago a wave of bombings against police stations along Colombia’s Caribbean coast in just 24 hours saw seven officers killed and dozens more injured.