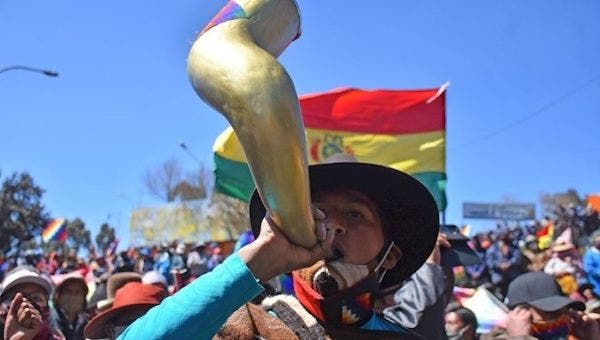 August 20, 2020 – Those who took part in the protests against the postponement of the elections are accused of terrorism and sedition.

Bolivia’s coup-born regime led by Jeanine Añez restarted the political persecution against workers and farmers after social organizations suspended their protests until October 18.

Arrest warrants were also issued against Leonardo Loza and Andronico Rodriguez, who are leaders of the Cochabamba Tropics Federation.

“The arrest warrants were issued against these people for criminal offenses such as terrorism, sedition, armed uprising, instigation of violence, and others,” Interior Minister Vice Minister Javier Issa said, adding that the Police are actively looking for them.

Members of the Association of Victims who died and were wounded after the Senkata massacre gathered outside the Bolivian Ministry of Justice to demand that the de facto government identify the perpetrators, which took place on November 19. 2019. pic.twitter.com/vw7xe1Xqc1

In response to the initiation of criminal proceedings against workers and peasants, the Movement Towards Socialism (MAS) lawmaker Betty Yañiquez presented a bill to protect the constitutional rights of those who blocked roads to demand the return to democracy.

In this month, for twelve consecutive days, social organizations paralyzed the country’s highways as a measure of protest against the Añez regime’s new postponement of the general elections, which were to be held on September 6.

RELATED CONTENT: Jeanine Añez: So Far From God and So Close to the United States

On Wednesday, Vice Minister Issa did not rule out expanding the judicial process against former President Evo Morales and the MAS militants who are at the Mexican embassy in La Paz. The Añez regime is actively seeking to link them to this month’s social protests.

“If phone calls or other indications are located, we will assess whether these people were related to the events,” the coup-born regime official said.